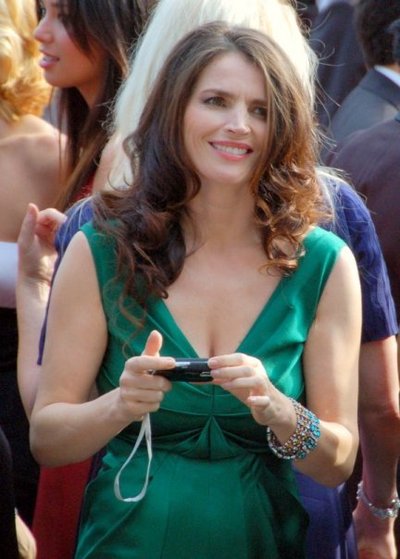 Julia Karin Ormond (born 4 January 1965) is an English actress. She rose to prominence appearing in such films as Legends of the Fall (1994), First Knight (1995), Sabrina (1995) and The Barber of Siberia (1998). She won Primetime Emmy Award for Outstanding Supporting Actress in a Miniseries or a Movie for role in HBO movie Temple Grandin (2010).

Ormond appeared in several television films early in her career, such as Young Catherine (1991) and Stalin (1992). In 1993 Ormond made her film debut in the lead role of an international movie, The Baby of Mâcon. In the following year she co-starred with Brad Pitt in Legends of the Fall.

In 1995 Ormond played lead roles in Jerry Zucker's First Knight opposite Richard Gere and Sean Connery and also in Sydney Pollack's Sabrina with Harrison Ford. In 1997 she played a lead role in the box office bomb thriller film Smilla's Sense of Snow. She also appeared in the 1998 Russian film The Barber of Siberia.

Since late 1990's Ormond has appeared in indie and television movies and played supporting roles in films, such as The Curious Case of Benjamin Button (2008), Che: Part One (2008) and My Week with Marilyn (2011). She has an independent production company, Indican Productions, based in New York City, and she executive-produced the Cinemax Reel Life documentary Calling the Ghosts: A Story about Rape, War and Women, which won a CableACE Award and a Robert F. Kennedy Journalism Award, and was an official selection of the Toronto and Berlin International Film Festivals. On stage, she appeared of David Hare's My Zinc Bed, for which she won an Olivier Award nomination for Best Actress.

On television, Ormond appeared as a guest star during the 2008-09 season of the CBS series CSI: NY. In 2010, she won an Emmy Award for her supporting role in the HBO film Temple Grandin.  She also guest starred in the tenth and final season of USA Network's series Law & Order: Criminal Intent in 2011. In addition, she plays the part of Marie Calvet, mother to Megan Draper, in the AMCTV series Mad Men. For her performance on Mad Men, she received a nomination for the Primetime Emmy Award for Outstanding Guest Actress in a Drama Series in 2012.[

Ormond will star in upcoming Lifetime series Witches of East End as the lead character.