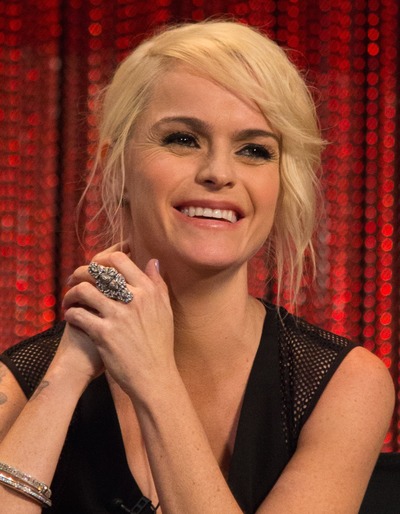 Taryn Manning (born November 6, 1978) is an American actress, fashion designer, and singer-songwriter. She is the vocalist for electronic duo Boomkat and co-owner of the clothing brand Born Uniqorn. Manning gained her first major role as an actress in 2001 when she played the role of Maddy in Crazy/Beautiful. She is well known for her film portrayals in Crossroads, 8 Mile, A Lot Like Love, Hustle & Flow, Weirdsville, and Jack and Jill vs. the World.

Taryn Manning was born to Sharyn and Bill Manning, who divorced when she was two months old. Her mother took Taryn and her brother Kellin to Tucson, Arizona. At the age of 12, Manning and her mother moved to California, where she attended school in Encinitas, California - Oak Crest. She has been the State Champion in Karate in Arizona. When she was 14, her musician father, Bill, committed suicide.

Manning began acting in the late 1990s, appearing in small roles in several film and television productions, including episodes of The Practice, Get Real, Speedway Junky, NYPD Blue and Popular. She also made a guest-appearance on the TV series Boston Public, in a role that was specifically written for her. In 1999, she was featured in an independent film called Speedway Junky. She also auditioned for the American version of Popstars, which aired in early 2001 on The WB.

She made her film debut with a part in the romantic drama Crazy/Beautiful, which was followed by a role in the 2002 feature film, Crossroads, where she played one of two best friends of singer Britney Spears. She appeared in 8 Mile as B-Rabbit's ex girlfriend, Janeane, and in Peter Kosminksy's White Oleander. Along with supporting roles in the films Lucky 13 and Debating Robert Lee, Manning appeared briefly in Anthony Minghella's Civil War melodrama Cold Mountain and in the romantic comedy A Lot Like Love.

Her breakthrough role was as Nola in the 2005 film Hustle & Flow, opposite Terrence Howard, playing a prostitute in Memphis, Tennessee. Manning was nominated in the Washington D.C. Area Film Critics Association Awards for Best Breakthrough Performance.

In 2003, Manning and her brother Kellin formed the band Boomkat. The band first signed a major label deal with American Idol producer Randy Jackson, but the deal fell through. Robbie Robertson then signed them to DreamWorks Records, which was Boomkat's label from 2002 to 2004. In 2002, she sang a rendition of "I'll Take You There" with Tweet in several Gap commercials directed by Peter Lindbergh. Their debut album, Boomkatalog.One, was released on March 18, 2003. Boomkat released two singles "The Wreckoning" and "What U Do 2 Me". The first single, "The Wreckoning", hit #1 on the Hot Dance Music/Club Play chart. The band closed out 2003 as the #5 Hot Dance Club Play Artist for the year in Billboard Magazine.

Manning was aboard the JetBlue Airways Flight 292 that had to make a three hour figure-8 flight and emergency landing at Los Angeles International Airport on September 21, 2005. In her own words: "it was the most surreal, out-of-body experience I ever had".