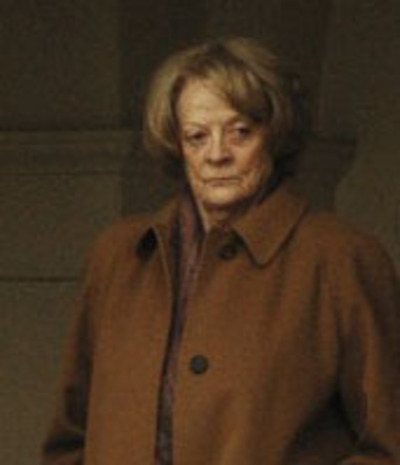 Dame Margaret Natalie Smith, CH, DBE (born 28 December 1934)[1] is an English actress. She made her stage debut in 1952 and has had an extensive, varied career in stage, film and television spanning over sixty years. Smith has appeared in over 50 films and is one of Britain's most recognisable actresses. She was appointed Dame Commander of the Order of the British Empire (DBE) in the 1990 New Year Honours for services to the performing arts, and Member of the Order of the Companions of Honour (CH) in the 2014 Birthday Honours for services to drama.

Smith began her career on stage at the Oxford Playhouse in 1952 and made her Broadway debut in New Faces of '56. For her work on the London stage, she has won a record five Best Actress Evening Standard Awards: for The Private Ear and The Public Eye (1962), Hedda Gabler (1970), Virginia (1981), The Way of the World (1984) and Three Tall Women (1994). In New York, she received Tony Award nominations for Private Lives (1975), Night and Day (1979) and Lettice and Lovage (1990). For the latter, she won the 1990 Tony Award for Best Actress in a Play. Other stage roles include Stratford Shakespeare Festival productions of Antony And Cleopatra (1976) and Macbeth (1978), and West End productions of Edward Albee's A Delicate Balance (1997) and David Hare's The Breath of Life (2002), both at the Theatre Royal Haymarket.

On screen, she first drew praise for the crime film Nowhere to Go (1958), for which she received her first BAFTA Award nomination. Her 1965 film role as Desdemona, in William Shakespeare's Othello, earned her an Academy Award nomination and a Golden Globe nomination. Since then Smith has worked consistently in film, television and stage.

Other notable films include Love and Pain and the Whole Damn Thing (1973), Death on the Nile (1978), Clash of the Titans (1981), Evil Under the Sun (1982), Hook (1991), Sister Act (1992), The First Wives Club (1996), The Best Exotic Marigold Hotel (2012), and as Professor Minerva McGonagall in the highly successful Harry Potter film series (2001–2011). She currently stars as Violet Crawley, Dowager Countess of Grantham, on Downton Abbey, for which she has won a Golden Globe, two Screen Actors Guild awards and two consecutive Emmy awards. She previously won an Emmy for the 2003 TV film My House in Umbria.

As well as her numerous competitive awards for acting in theatre, film and television, including two Academy Awards, five BAFTA Awards, three Emmy Awards, three Golden Globes, four Screen Actors Guild Awards and a Tony Award, Smith has also received several honorary awards, including two more BAFTAs, the Special Award in 1993 and the BAFTA Fellowship in 1996. She also received the Honorary Olivier Award in 2011. Smith is one of the few actresses to have achieved the Triple Crown of Acting. In September 2012, she was awarded the Stratford Shakespeare Festival's Legacy Award, which she accepted from Christopher Plummer, who presented it to her in a ceremony at the Fairmont Royal York Hotel in Toronto ON, Canada.

Smith was born in Ilford, Essex, but moved with her family to Oxford when she was four years old. She is the daughter of Margaret (née Hutton), a Glasgow-born secretary, and Nathaniel Smith, a Newcastle upon Tyne-born public health pathologist who worked at Oxford University.

As a child, Smith's parents used to tell her the romantic story of how they had met on the train from Glasgow to London via Newcastle. She has older twin brothers, Alistair and Ian, who went to architecture school. She attended Oxford High School until age sixteen, when she left to study acting at the Oxford Playhouse.

In 1952, aged 17, under the auspices of the Oxford University Dramatic Society, Smith began her career as Viola in Twelfth Night at the Oxford Playhouse. In 1954, she appeared in the television programme Oxford Accents produced by Ned Sherrin. She appeared in her first film in 1956, in an uncredited role in Child in the House, and made her Broadway debut the same year playing several roles in the review New Faces of '56, at the Ethel Barrymore Theatre from June to December 1956. In 1957, she starred opposite Kenneth Williams in the musical comedy Share My Lettice, written by Bamber Gascoigne. In 1958, she received the first of her 17 BAFTA Film and TV nominations for her role in the film Nowhere to Go.

In 1962, Smith won the first of a record five Best Actress Evening Standard Awards for her roles in Peter Shaffer's plays The Private Ear and The Public Eye, again opposite Kenneth Williams. She became a fixture at the Royal National Theatre in the 1960s, most notably for playing Desdemona in Othello opposite Laurence Olivier and earning her first Oscar nomination for her performance in the 1965 film version. She appeared opposite Olivier in Ibsen's The Master Builder and played comedic roles in The Recruiting Officer and Much Ado About Nothing. Her other films at this time included Go to Blazes (1962), The V.I.P.s (1963), The Pumpkin Eater (1964), Hot Millions (1968) and Oh! What A Lovely War (1969).

Smith won the Academy Award for Best Actress for her performance in the title role of the 1969 film The Prime of Miss Jean Brodie. Vanessa Redgrave had originated the role on stage in London and Zoe Caldwell won the Tony Award for Best Actress in a Play, when she played the role in New York. The role also won Smith her first BAFTA Award. In 1970, she played the title role in Ingmar Bergman's London production of the Ibsen play Hedda Gabler, winning her second Evening Standard award for Best Actress. She received her third Academy Award nomination for the 1972 film Travels with My Aunt. She also appeared in the film Love and Pain and the Whole Damn Thing (1973). In the mid 1970s, she made several guest appearances on The Carol Burnett Show.

Smith has been married twice. She married actor Robert Stephens on 29 June 1967 at Greenwich Register Office, ten days after the birth of their first child. The couple had two sons, actors Chris Larkin (born 1967) and Toby Stephens (born 1969), and divorced on 6 May 1974. Maggie Smith has five grandchildren.

She married playwright Beverley Cross on 23 August 1975 at the Guildford Register Office; he died on 20 March 1998. When asked if she was lonely, she replied, "[on Cross' death] I don't know. It seems a bit pointless. Going on one's own and not having someone to share it with."