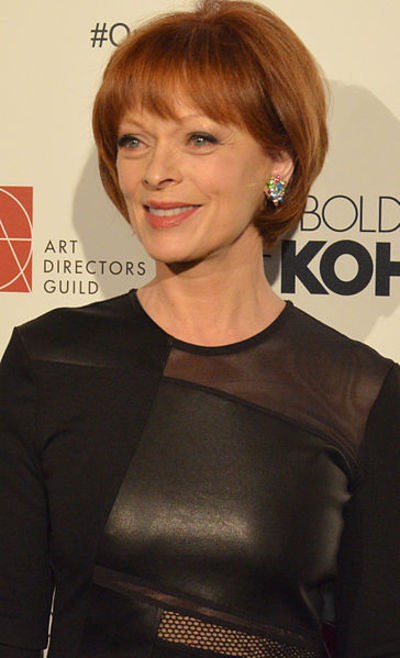 Frances Louise Fisher (born 11 May 1952) is a British-born American actress.

Fisher was born in Milford on Sea, Hampshire, England, the daughter of American parents Olga Rosine (née Moen), a housewife, and William Irving "Bill" Fisher, Sr, an oil refinery construction superintendent. Before she reached the age of fifteen, she had moved nine times and traveled because of her father's job, going to places like Italy, Turkey, Colombia, France, Canada, and Brazil. When she was 15, her mother died and she took on the responsibility to help raise her younger brother. She ultimately completed her high school at Lutcherstark High School in Orange, Texas, where she performed in theatre productions, and later worked as a secretary.

Deciding to follow her interest in theatre, she moved to New York, where she subsequently enjoyed a 14-year stage career in regional and off-Broadway productions. She became involved with the Actors Studio, where she studied with Lee Strasberg. Fisher moved to Abingdon, Virginia, where she began her acting career at the Barter Theatre, a year-round repertory theatre.

During the next 10 years, she concentrated on theatre in New York and in regional theatres all over the East Coast. She has also returned to theatre; she appeared in Arthur Miller's last play, Finishing the Picture, produced at the Goodman Theatre in Chicago, and in a 2006 production of The Cherry Orchard at the Mark Taper Forum in Los Angeles.

Fisher gained recognition playing Detective Deborah Saxon on the ABC daytime soap opera The Edge of Night from 1976 to 1981. She later joined the cast of CBS's Guiding Light as Suzette Saxon in 1985. After leaving daytime television, Fisher guest starred as a bartender, Savannah, at "The Lobo" in the first season of ABC comedy series Roseanne. She also appeared on Newhart, Matlock, and In the Heat of the Night.

Fisher made her film debut in Can She Bake a Cherry Pie? (1983) and later appeared in Patty Hearst directed by Paul Schrader. In 1989 she appeared in Pink Cadillac opposite Clint Eastwood, and the pair began a six-year offscreen relationship. In next year she appeared in Welcome Home, Roxy Carmichael.

In 1992, Fisher had her breakout role in Unforgiven, an Academy Award winning film directed by Clint Eastwood, who also starred. In later years she began acting regularly in major and independent films. Her most famous role in film was as the society matron Ruth DeWitt Bukater, the mother of the character played by Kate Winslet, in the 1997 blockbuster Titanic. She appeared in True Crime (1999) with Eastwood as D.A.

In 1970, when Fisher was 18, she married her high school sweetheart Billy Mack Hamilton. They divorced two years later.

Fisher was in a relationship with fellow actor Clint Eastwood for six years in the early 1990s. During that time, the couple had a child together, Francesca Eastwood (b. 1993).