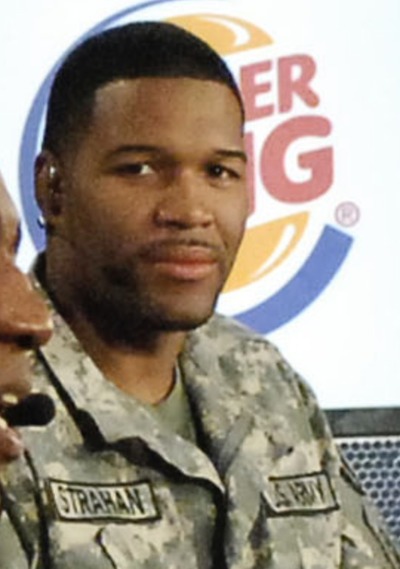 Michael Anthony Strahan (born November 21, 1971) is a retired American football defensive end who spent his entire 15-year career with the New York Giants of the National Football League (NFL). Strahan set a record for the most sacks in a season in 2001, and won a Super Bowl in his final season in 2007. After retiring from the NFL, Strahan became a media personality. He is currently a football analyst on Fox NFL Sunday, and has also served as co-host on the syndicated morning talk show Live! with Kelly and Michael (with co-host Kelly Ripa) from 2012 to 2016. In 2014, he became a regular contributor on the ABC morning television show Good Morning America, and in 2016 the network announced that Strahan would be leaving Live! to join GMA on a full-time basis. He starred in and produced the short-lived Fox sitcom Brothers and appeared as host for Pros vs. Joes alongside fellow Fox football analyst Jay Glazer. On February 1, 2014, he was elected to the Pro Football Hall of Fame.

Strahan was born in Houston, Texas. He is the youngest child of Louise (Traylor) Strahan, a basketball coach, and Gene Willie Strahan, a boxer with a 1-1 record against future heavyweight Ken Norton. He is the nephew of retired pro football player Arthur Strahan. Gene was a major in the U.S. Army, and when Michael was 9, the family moved to an army post - BFV (Benjamin Franklin Village) - in Mannheim, West Germany. Although Strahan did not begin to play high school football at Westbury High School (Houston, Texas) until his senior year, he did play organized football while attending school at MAHS (Mannheim American High School) a US Department of Defense Dependent High School, in Käfertal (Mannheim), Germany, playing linebacker for the Mannheim Redskins in 1985. The summer before Strahan's senior year of high school, his father sent him to live with his uncle Art in Houston so he could attend Westbury High School. Strahan played one season of football, which was enough for him to get a scholarship offer from Texas Southern University. He then flew back to Germany for the spring term, where he graduated from Mannheim Christian.

Strahan followed in the footsteps of his uncle Art, who also played defensive end at Texas Southern University. Strahan was so dominant he drew double teams, and TSU coaches dubbed Strahan double teaming "Strahan rules." By his junior season, Strahan began to turn himself into an NFL prospect. As a senior at Texas Southern, Strahan was selected All-America first team by The Poor Man's Guide to the NFL Draft, The Sheridan Network, Edd Hayes Black College Sports Report and the Associated Press. He recorded 62 tackles with a school-record 19 quarterback sacks and 32 tackles totaling 142 yards in losses. He was also selected Division I-AA Defensive Player of the Year by The Poor Man's Guide and Edd Hayes Black College Sports Report. In 1992 he was named 1st team All-Southwestern Athletic Conference and the SWAC's Player of the Year for the 2nd consecutive season. He was also named Black College Defensive Player of the Year. As a junior in 1991, Strahan led the SWAC with 14.5 quarterback sacks. His 41.5 career sacks is a Texas Southern record.

Strahan was drafted by the New York Giants in 1993. He played in only 9 games due to injuries, and missed the Giants' two playoff games that season. After a few unremarkable seasons, Strahan had a breakout year in 1997, recording 14 sacks. He was voted into his first Pro Bowl and was also named First Team All-Pro by the Associated Press. In 1998, Strahan continued his success, racking up 15 sacks and being voted into his second Pro-Bowl and All-Pro team.

Strahan was a member of the 2000 Giants and participated in their playoff run to Super Bowl XXXV. Despite coming off a strong NFC Championship Game, where the Giants defeated the Minnesota Vikings 41–0, the Baltimore Ravens proved too strong for the Giants and they were handily defeated 34–7. In 2002, Michael Strahan and the Giants negotiated on a new contract. He said the team failed to negotiate after he turned down its first contract proposal. He accused the front office of not trying to be competitive in 2002. Four days later, running back Tiki Barber ripped him for being selfish and greedy. The two had a heated phone conversation that night, and Strahan said they no longer speak. It also surfaced in the spring that the Giants explored trading Strahan, after which he suggested that management had orchestrated the contract flap to make him look bad. The team denied that.

Few defensive ends in the NFL were more dominant than Strahan from 1997 to 2005. He was named the 2001 NFL Defensive Player of the Year and was a two-time NFC Defensive Player of the Year (in 2001 and 2003). Throughout the greater part of the 2004 season, Strahan was injured with a torn pectoral muscle, which limited him to only 4 sacks. He rebounded in 2005, returning to the Pro Bowl, with his protégé, Osi Umenyiora as the two combined for 26 sacks while anchoring the Giants' defense. Strahan was considered by many coaches, peers, and experts as the standard, and best at his position during the prime of his career (1997-2005). He was also regarded as one of if not the best defensive end ever at defending the run which made people and peers view him as a complete defensive end.

It seemed as though Strahan would retire after the 2006 season when he did not report to Giants training camp and missed the entire preseason, but the 14-year veteran opted to return for one final year. On October 23, 2006, with a sack of Drew Bledsoe in a Monday night game against the Dallas Cowboys, Strahan tied Lawrence Taylor for the Giants franchise record for most career sacks with 132½. It was the last sack Strahan would get that season, as two weeks later he suffered a Lisfranc fracture against the Houston Texans and would miss the remainder of the season and the playoffs.

His 15th and final season proved to be the Giants' best record since 1990. On September 30, 2007, he sacked Donovan McNabb from the Philadelphia Eagles on Sunday Night Football, increasing his career total to 133.5, setting a new franchise record. This total does not include 9½ sacks accrued by Taylor in his rookie season of 1981, the year before sacks became an official NFL statistic. On Sunday February 3, 2008, at the University of Phoenix Stadium in Glendale, Arizona, Strahan had 2 tackles and 1 sack in Super Bowl XLII, in what is considered one of the biggest upsets in NFL history. Bolstered by a strong defense and unrelenting pass rush, the Giants went on to win the game 17-14, over the then-undefeated 18-0 New England Patriots, giving Strahan his first Super Bowl win as an NFL starter. His saying was "Stomp you out!"

Strahan retired with a 2007 Super Bowl Title (his last game), 141.5 career sacks, 854 career tackles, 4 career interceptions, 24 forced fumbles and 3 career touchdowns in 200 games over a 15-year career (through 2007 season). He was also named to the Pro Bowl roster seven times.

Strahan resides in Rutherford, New Jersey. and graduated from Texas Southern University in 1993.

He was married to his first wife, Wanda Hutchins, in Germany until 1996. They have a daughter, Tanita Strahan (b. 1992), and son, Michael Anthony Strahan, Jr. (b. 1995). Strahan then moved them to the US and purchased a $163,000 house in the same Houston neighborhood in which his parents reside.

In 1999, he married Jean Muggli of North Dakota after meeting at a Manhattan spa. They have twin daughters, Sophia and Isabella Strahan (b. 2004). They divorced acrimoniously in 2006. In January 2007 Judge James B. Convery awarded Muggli $15 million in a divorce settlement in addition to $18,000 monthly child support. In her testimony, Muggli claimed that their (at the time 20-month-old) daughters liked "to be accessorized", and that "Isabella doesn't like to leave the house without a purse" and that the children's preferences justified her spending $22,500 on photo shoots, $27,000 on clothing, and $1,700 for sign language classes. (Neither daughter is hearing impaired.) With this being more than half of his $22 million in assets, Strahan appealed. In March 2007, the court ordered the mansion to be auctioned and the sales money split evenly with Jean; the house is valued at $3.6 million.

In August 2009 Strahan became engaged to Nicole Mitchell, Eddie Murphy's ex-wife, however in 2014 the two broke off their engagement due to busy schedules.