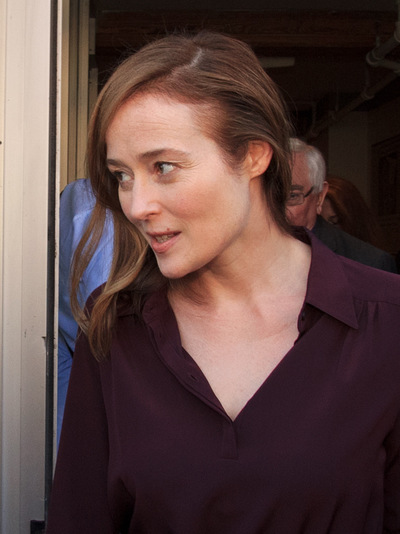 Ehle appeared as a toddler in a 1973 Broadway revival of A Streetcar Named Desire, in which her mother played Blanche DuBois. She spent her childhood in both the UK and the US, attending several different schools, including Interlochen Arts Academy. She was raised largely in Asheville, North Carolina. Her drama training was split between the North Carolina School of the Arts and the Central School of Speech and Drama in London.

Ehle made her West End debut as Orgon's wife in the 1991 Peter Hall Company production of Tartuffe, for which she won second prize at the Ian Charleson Awards. Hall then cast her as Calypso in a 1992 television adaptation of Mary Wesley's novel The Camomile Lawn, in which she and her mother played the same character at different ages. This story, produced by UK's Channel 4, was a five-part miniseries about the lives and loves of a family of cousins from 1939 to the present. The two would later reprise this different age portrayal of a character as Valerie in István Szabó's 1999 movie Sunshine.

Her performance as Elizabeth Bennet in the BBC 1995 television adaptation of Jane Austen's classic Pride and Prejudice earned her a British Academy of Film and Television Arts (BAFTA) award. After a stint with the Royal Shakespeare Company, she gained her first major feature film role in Paradise Road. She continued her career on both stage and screen. In 2000, she received further critical acclaim for her Broadway debut as Annie in Tom Stoppard's The Real Thing, winning both a Theatre World Award and the Tony Award for Best Performance by a Leading Actress in a Play. Her mother was also nominated for the same award that year for Waiting in the Wings. After a hiatus, Ehle returned to the stage in 2005 in The Philadelphia Story at the Old Vic opposite Kevin Spacey. The following year, she played Lady Macbeth in Macbeth as part of the Shakespeare in the Park, and won her second Tony award for portraying three characters in Stoppard's The Coast of Utopia triptych, which ran from October 2006 until May 2007.

Her more recent film work includes Before the Rains, an Indian-U.S. co-production directed by Santosh Sivan, and Pride and Glory with Edward Norton and Colin Farrell. In 2008, she was featured in the CBS telefilm The Russell Girl.

In August 2009, it was announced that Ehle would play the character of Catelyn Stark in the pilot of HBO's Game of Thrones, an adaptation of George R.R. Martin's A Song of Ice and Fire fantasy book series. Ehle filmed the pilot episode, but decided it was too soon to return to work after the birth of her daughter. She was replaced by Northern Irish actress Michelle Fairley.

In 2010, Ehle starred alongside John Lithgow in the production of Mr. & Mrs. Fitch presented by Second Stage Theatre. She played Myrtle Logue, wife of King George VI's speech therapist Lionel Logue, in The King's Speech. George was played by her Pride and Prejudice costar Colin Firth.

In 2011, Ehle played Dr. Ally Hextall in Steven Soderbergh's critically acclaimed Contagion. In the autumn of 2011, Ehle began a costarring role in the American television series A Gifted Man. Her character is a ghost who visits with her ex-husband and asks him to assist with her low-income clinic.

In 2012, Ehle played CIA officer Jessica in Zero Dark Thirty. In 2014, Ehle played Liz Kline in the remake, Robocop, also starring alongside James Spader as Madeline Pratt in the American TV series The Blacklist. She played Anastasia Steele's mother in the 2015 Fifty Shades of Grey film, and also appeared in Spooks: The Greater Good.