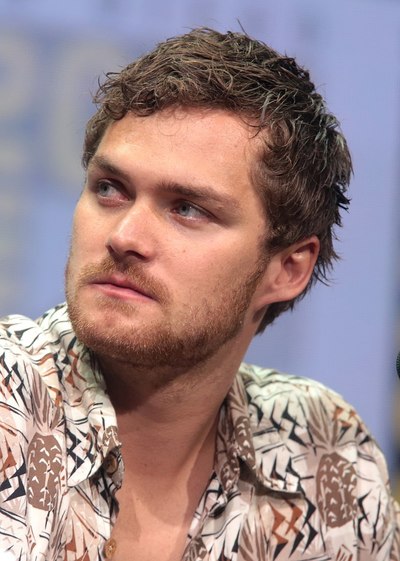 Finn Jones (born Terence Jones; 24 March 1988) is an English actor, best known for his role as Loras Tyrell in the HBO series Game of Thrones. He also stars as Danny Rand/Iron Fist in the Netflix series Marvel's Iron Fist, which is set within the Marvel Cinematic Universe.

Jones trained at The Arts Educational Schools on a three-year acting course. Prior to this he was a Sixth Form student at Hayes School in Bromley.

In October 2009, Jones played Jamie, a young man who found love with Hannah Ashworth in the second series of Hollyoaks Later. Later, he returned to the Hollyoaks village to tie in with Emma Rigby's (Hannah Ashworth) departure in February 2010.

In January 2010, Jones appeared in the 11th series of Doctors. On 1 and 8 April 2010, he appeared in two episodes of The Bill playing Commander Lisa Kennedy's (played by Julie Graham) son Mark Kennedy, who was accused of murder. In the same month he finished filming for a new online drama called The Curfew commissioned by Channel 4 and produced by BAFTA award-winning company LittleLoud Productions.

Jones also played Santiago Jones in the Doctor Who spin-off The Sarah Jane Adventures in the story Death of the Doctor alongside Katy Manning as former Doctor Who companion Jo Grant and Matt Smith as the Eleventh Doctor.

On 19 June 2010 it was announced that Jones would be appearing in Game of Thrones, the HBO adaptation of George R R Martin's A Song of Ice and Fire novel series, as Ser Loras Tyrell. He also had a small role in the 2012 horror film Wrong Turn 5: Bloodlines.

In 2014, he starred in two films, Sleeping Beauty and The Last Showing. It was reported in February 2016, that Jones was cast as Danny Rand/Iron Fist for the Marvel Television/Netflix series, Iron Fist, which will take place within the larger Marvel Cinematic Universe. In March 2016, Marvel officially confirmed that Jones was cast as Iron Fist.

Jones' birth name is Terence "Terry" Jones. He had to change it to avoid confusion with Terry Jones, a member of Monty Python.

In December 2015, Jones assisted Oxfam campaigners in raising money for their appeal to support Syrian refugees, by singing carols at a shopping centre in Islington. He appeared alongside Jeremy Corbyn, the Leader of the Labour Party, and later voiced his support for Corbyn in a post on Instagram.