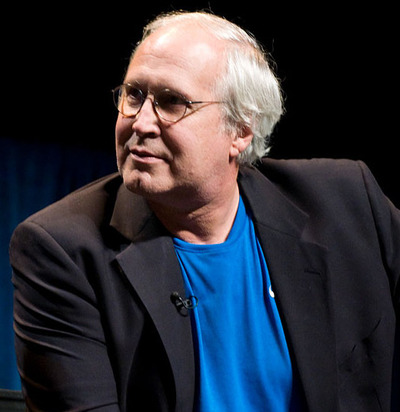 Cornelius Crane "Chevy" Chase (born October 8, 1943) is an American comedian, actor, and writer. Born into a prominent New York family, Chase worked a plethora of odd jobs before he moved into comedy and began acting with National Lampoon. He quickly became a key cast member in the inaugural season of Saturday Night Live, where his Weekend Update skit soon became a staple of the show.

Chase is well known for his portrayal of the character Clark Griswold in four National Lampoon's Vacation films, and for his roles in comedies including Foul Play (1978), Caddyshack (1980), Seems Like Old Times (1980), Fletch (1985), Spies Like Us (1985), and ¡Three Amigos! (1986). He has hosted the Academy Awards twice (1987 and 1988) and briefly had his own late-night talk show, The Chevy Chase Show. In 2009, he became a regular cast member (Pierce Hawthorne) on the NBC comedy series Community. Chase left the show in 2012, having already filmed most of the episodes in season 4.

Chevy Chase was born in Lower Manhattan, New York City and was raised in Woodstock, New York. His father, Edward Tinsley "Ned" Chase, was a prominent Manhattan book editor and magazine writer. His mother, Cathalene Parker (née Browning), a concert pianist and librettist, was the daughter of Admiral Miles Browning, who served a critical role at the Battle of Midway in World War II; she was adopted as a child by her stepfather, Cornelius Vanderbilt Crane, heir to The Crane Company, and took the name Cathalene Crane. Chase's paternal grandfather was artist/illustrator Edward Leigh Chase, and his great-uncle was painter/teacher Frank Swift Chase. His maternal grandmother, Cathalene (Parker), was an opera singer who performed several times at Carnegie Hall. Chase was named for his adoptive grandfather Cornelius, while the nickname Chevy was bestowed by his grandmother, derived from the medieval English The Ballad of Chevy Chase. As a descendant of the Scottish Clan Douglas, the name "Chevy" seemed appropriate to her.

Chase is a fourteenth-generation New Yorker, and was listed in the Social Register at an early age. His mother's ancestors arrived in Manhattan starting in 1624; among his ancestors are New York City mayors Stephanus Van Cortlandt and John Johnstone; the Schuyler family through his ancestor Gertrude Schuyler, the wife of Stephanus Van Cortlandt; John Morin Scott, General of the New York Militia during the American Revolution; Anne Hutchinson, dissident Puritan preacher and healer; and Mayflower passengers and signers of the Mayflower Compact, John Howland, and the Pilgrim colonist leader and spiritual elder of the Plymouth Colony, William Brewster. According to his brother John:

"[Chevy] once told me that people who defined themselves in terms of their ancestry were like potatoes – the best parts of them were underground. He disdained the pretension of my mother's side of the family, as embodied by her mother, Cattie".

As a child, Chase vacationed at Castle Hill, the Cranes' summer estate in Ipswich, Massachusetts. Chase's parents divorced when he was four; his father remarried into the Folgers coffee family, and his mother remarried twice. He has stated that he grew up in an upper middle class environment and that his adoptive maternal grandfather did not bequeath any assets to Chase's mother when he died. In a 2007 biography, Chase stated that he was physically and psychologically abused as a child by his mother and stepfather, John Cederquist. Both his parents died in 2005.

Chase attended Riverdale Country School before being expelled. He ultimately graduated from the Stockbridge School in Stockbridge, Massachusetts. He then attended Haverford College during the 1962–63 term, where he was noted for slapstick comedy and an absurd sense of physical humor (including his signature pratfalls and "sticking forks into his orifices"). During a 2009 interview on The Today Show, he ostensibly verified the oft-publicized urban legend that he was expelled for harboring a cow in his fourth floor room, although his former roommate David Felson asserted in a 2003 interview that Chase left for academic reasons. Chase transferred to Bard College in Annandale-on-Hudson, New York, where he studied a pre-med curriculum and graduated in 1967 with a BA in English.

Chase did not enter medical school, which meant he would be subject to the military draft. Chase was not drafted; when he appeared in January 1989 as the first guest of the just-launched late-night Pat Sajak Show, he said he had convinced his draft board he deserved a 4-F classification by "falsely claiming, among other things, that he had homosexual tendencies".

Chase played drums with the college band The Leather Canary, headed by school friends Walter Becker and Donald Fagen. Chase has called the group "a bad jazz band"; Becker and Fagen later founded the successful group Steely Dan. Chase has absolute pitch. He played drums and keyboards for a rock band called Chamaeleon Church, which recorded one album for MGM Records before disbanding in 1969. To give the album a more soft-rock sound, producer Alan Lorber made several alterations in the mixing, including the muting of Chase's bass drum, and Chase was reportedly incensed when he heard the final mix. Before becoming famous as a writer, actor and comedian, Chase worked in many odd jobs including as a cab driver, truck driver, motorcycle messenger, construction worker, waiter, busboy, fruit picker, produce manager of a supermarket, audio engineer, salesman in a wine store, and a theater usher.

Chase was a member of an early underground comedy ensemble called Channel One which he co-founded in 1967. He also wrote a one-page spoof on Mission: Impossible for Mad Magazine in 1970 and was a writer for the short-lived Smothers Brothers TV show comeback in the early 1970s. Chase made the move to comedy as a full-time career by 1973, when he became a cast member of The National Lampoon Radio Hour, a syndicated satirical radio series. The Lampoon Radio Hour also featured John Belushi, Gilda Radner, Bill Murray, and Brian Doyle-Murray, all of whom later became "Not-Ready-For-Prime Time Players" on NBC Saturday Night (later retitled NBC's Saturday Night and finally Saturday Night Live). Chase and Belushi also appeared in National Lampoon's off-Broadway revue Lemmings, a sketch and musical send-up of popular youth culture (in which Chase also played the drums during the musical numbers). He appeared in the theatrical release The Groove Tube which was directed by another co-founder of Channel One, Ken Shapiro, and which featured several Channel One sketches.

Chase was one of the original cast members of Saturday Night Live (SNL), NBC's late-night comedy television show, beginning in October 1975. During the first season, he introduced every show except one by saying, "Live from New York, it's Saturday Night!" The remark was often preceded by a pratfall, known as "The Fall of the Week". Chase became known for his skill at physical comedy. In one comedy sketch, he mimicked a real-life incident in which President Gerald Ford accidentally tripped while disembarking from Air Force One in Salzburg, Austria. This portrayal of President Ford as a bumbling klutz became a favorite device of Chase and helped form the popular concept of Ford as being a clumsy man. In later years, Chase met and became friendly with President Ford. Chase's physical stunts led to at least one self-injury.

Chase was the original anchor for the Weekend Update segment of SNL, and his catchphrase introduction, "I'm Chevy Chase . . . and you're not" became well known. His trademark conclusion, "Good night, and have a pleasant tomorrow" was later resurrected by Jane Curtin and Tina Fey. Chase also wrote comedy material for Weekend Update. For example, he wrote and performed "The News for the Hard of Hearing". In this skit, Chase would read the top story of the day, aided by Garrett Morris, who would repeat the story by loudly shouting it. Chase claimed that his version of Weekend Update would later be the inspiration for other mock-news shows such as The Daily Show and The Colbert Report. (Weekend Update was later revived as a segment on The Chevy Chase Show, a short-lived late-night talk-show produced by Chase and broadcast by Fox Broadcasting Company.)

Chase's early film roles included Tunnel Vision, the box office hit Foul Play, and Oh Heavenly Dog. The role of Eric 'Otter' Stratton in National Lampoon's Animal House was originally written with Chase in mind, but he turned the role down to work on Foul Play. The role went to Tim Matheson instead. Chase said in an interview that he chose to do Foul Play so he could do "real acting" for the first time in his career instead of just doing "schtick". Chase followed Foul Play with the successful Harold Ramis comedy Caddyshack, in 1980. That same year, he also reunited with Goldie Hawn (his co-star in Foul Play) in Neil Simon's Seems Like Old Times and released a self-titled record album, co-produced by Chase and Tom Scott, with novelty and cover versions of songs by Randy Newman, Barry White, Bob Marley, the Beatles, Donna Summer, Tennessee Ernie Ford, The Troggs, and the Sugarhill Gang.

Chase narrowly escaped death by electrocution during the filming of Modern Problems in 1980. During a sequence in which Chase's character wears "landing lights" as he dreams that he is an airplane, the current in the lights short-circuited and arced through Chase's arm, back, and neck muscles. The near-death episode caused Chase to experience a period of deep depression, as his marriage to Jacqueline had ended just prior to the start of filming. Chase continued his film career in 1983's National Lampoon's Vacation, directed by Ramis and written by John Hughes. He married Jayni Luke in 1983, and in 1985, he starred in Fletch, the first of two films based on Gregory Mcdonald's Fletch books. Chase joined SNL veterans Steve Martin and Martin Short in the Lorne Michaels-produced comedy ¡Three Amigos! in 1986, declaring in an interview that making ¡Three Amigos! was the most fun he had had on a film. The trio hosted SNL that year, the only time the show has had three hosts on one show.

At the height of his career in the late 1980s, Chase earned around US$7 million per film and was a highly visible celebrity. He appeared alongside Paul Simon, one of his best friends, in Simon's 1986 second video for "You Can Call Me Al", in which he lip-syncs all of Simon's lyrics. Chase hosted the Academy Awards in 1987 and 1988, signing on to the proceedings in 1987 with the opener, "Good evening, Hollywood phonies!" Chase filmed a sequel to Vacation, 1985's National Lampoon's European Vacation and then a third, National Lampoon's Christmas Vacation, in 1989, which, thanks to its holiday theme, has become one of his more durable films, airing on NBC every December. He played saxophone onstage at Simon's free concert at the Great Lawn in Central Park in the summer of 1991. Later in 1991, he helped record and appeared in the music video "Voices That Care" to entertain and support U.S. troops involved in Operation Desert Storm, and supported the International Red Cross.

Chevy's first marriage to Jacqueline Carlin was formalized on December 4, 1976. After 17 months, his marriage to Carlin was dissolved through a divorce—the annulment was evidently related to his alcohol and cocaine use. His daily cocaine consumption was reportedly more than two grams (0.07 oz.), and the side effects of such drug use were megalomania, paranoia and incoherence.

In 1986, Chase was admitted to the Betty Ford Clinic for treatment of an addiction to prescription painkillers. His use of these drugs reportedly began after he experienced ongoing back pain related to the many pratfalls he took beginning with his Saturday Night Live appearances. In 2010, he said that his drug abuse had been "low level".