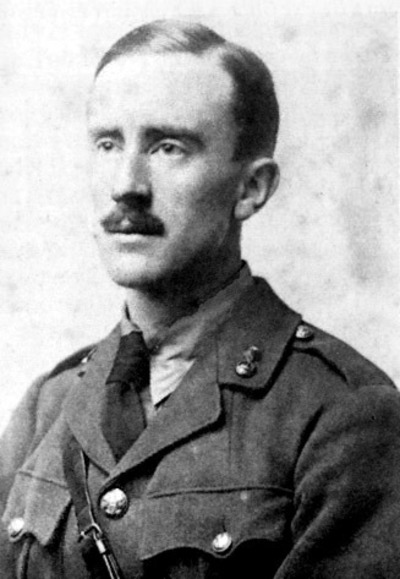 John Ronald Reuel Tolkien, CBE (3 January 1892 – 2 September 1973) was an English writer, poet, philologist, and university professor, best known as the author of the classic high fantasy works The Hobbit, The Lord of the Rings, and The Silmarillion.

He served as the Rawlinson and Bosworth Professor of Anglo-Saxon at Pembroke College, Oxford, from 1925 to 1945 and Merton Professor of English Language and Literature at Merton College, Oxford from 1945 to 1959. He was at one time a close friend of C. S. Lewis—they were both members of the informal literary discussion group known as the Inklings. Tolkien was appointed a Commander of the Order of the British Empire by Queen Elizabeth II on 28 March 1972.

After his death, Tolkien's son Christopher published a series of works based on his father's extensive notes and unpublished manuscripts, including The Silmarillion. These, together with The Hobbit and The Lord of the Rings form a connected body of tales, poems, fictional histories, invented languages, and literary essays about a fantasy world called Arda, and Middle-earth within it. Between 1951 and 1955, Tolkien applied the term legendarium to the larger part of these writings.

While many other authors had published works of fantasy before Tolkien, the great success of The Hobbit and The Lord of the Rings led directly to a popular resurgence of the genre. This has caused Tolkien to be popularly identified as the "father" of modern fantasy literature—or, more precisely, of high fantasy. In 2008, The Times ranked him sixth on a list of "The 50 greatest British writers since 1945". Forbes ranked him the 5th top-earning dead celebrity in 2009.

Most of Tolkien's paternal ancestors were craftsmen. The Tolkien family had its roots in Lower Saxony but had been living in England since the 18th century, becoming "quickly intensely English". Tolkien derived his surname from the German word tollkühn, meaning "foolhardy". Several families with the surname Tolkien or other spelling variants live in northwestern Germany, mainly in Lower Saxony and Hamburg. A German writer has suggested that the name is more likely to derive from the village Tolkynen, near Rastenburg, East Prussia (now in north-eastern Poland), although that village is far from Lower Saxony; its name is derived from the now-extinct Old Prussian language.

Tolkien's maternal grandparents, John and Edith Jane Suffield, lived in Birmingham and owned a shop in the city centre. The Suffield family had run various businesses out of the same building, called Lamb House, since the early 19th century. From 1812 Tolkien's great-great-grandfather William Suffield had a book and stationery shop there; from 1826 Tolkien's great-grandfather, also named John Suffield, had a drapery and hosiery business there.

Tolkien's first civilian job after World War I was at the Oxford English Dictionary, where he worked mainly on the history and etymology of words of Germanic origin beginning with the letter W. In 1920, he took up a post as Reader in English Language at the University of Leeds, and became the youngest professor there. While at Leeds, he produced A Middle English Vocabulary and a definitive edition of Sir Gawain and the Green Knight with E. V. Gordon, both becoming academic standard works for several decades. He also translated Sir Gawain, Pearl, and Sir Orfeo. In 1925, he returned to Oxford as Rawlinson and Bosworth Professor of Anglo-Saxon, with a fellowship at Pembroke College.

During his time at Pembroke College Tolkien wrote The Hobbit and the first two volumes of The Lord of the Rings, whilst living at 20 Northmoor Road in North Oxford (where a blue plaque was placed in 2002). He also published a philological essay in 1932 on the name "Nodens", following Sir Mortimer Wheeler's unearthing of a Roman Asclepeion at Lydney Park, Gloucestershire, in 1928.