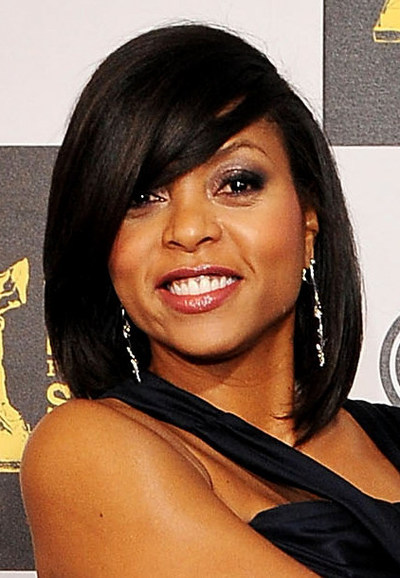 Taraji Penda Henson (born September 11, 1970) is an American actress and singer. She studied acting at Howard University and began her Hollywood career in guest-roles on several television shows before making her breakthrough in Baby Boy (2001). In 2005, she starred in Hustle & Flow and played Queenie in David Fincher's The Curious Case of Benjamin Button (2008), for which she received an Academy Award nomination. In 2010, she appeared in the comedy Date Night and co-starred in the remake of The Karate Kid. In 2012, Henson was in the large ensemble cast film Think Like A Man and reprised her role in its sequel.

Henson has also had an extensive career in television, having been a regular cast member on series such as The Division, Boston Legal and Eli Stone. From 2011 to 2013, she co-starred as Detective Jocelyn Carter in the CBS drama Person of Interest. As of 2015, she stars as Cookie Lyon on the Fox drama series Empire, for which she won a Critics' Choice Award and a Golden Globe Award, and nominated for an Emmy Award.

Henson was born in southeast Washington, D.C., the daughter of Bernice Gordon, a corporate manager at Woodward & Lothrop, and Boris Lawrence Henson, a janitor and metal fabricator. Her first and middle names are of Swahili origin, "Taraji" meaning hope and "Penda" meaning love. According to a mitochondrial DNA analysis, her matrilineal lineage can be traced to the Masa people of Cameroon. She says that North Pole explorer Matthew Henson is "the brother of my great-great grandfather."

Henson graduated from Oxon Hill High School in Oxon Hill, Maryland, in 1988. She then attended North Carolina Agricultural and Technical State University where she studied electrical engineering before transferring to Howard University to study drama. To pay for college, she worked mornings as a secretary at The Pentagon and evenings as a singing-dancing waitress on a dinner-cruise ship, the Spirit of Washington.

Henson's breakthrough role was in the 2001 comedy drama film Baby Boy which she portrayed Yvette, alongside singer Tyrese Gibson.

In 2005, Henson was in the independent film Hustle & Flow as Shug, the love interest of Terrence Howard, who portrayed the male lead DJay. The film was nominated for two Academy awards, winning one. In 2008, she appeared opposite Brad Pitt in The Curious Case of Benjamin Button. Henson plays the role of Queenie, Benjamin's mother, in a performance that led to an Academy award nomination for Best Supporting Actress. She noted in an interview that, "Queenie is the embodiment of unconditional love."

Henson was in Tyler Perry films The Family That Preys in 2008 and I Can Do Bad All By Myself in 2009. In 2010, she appeared in the remake of The Karate Kid alongside Jaden Smith. The film was a commercial success.

In 2011, she starred as Tiffany Rubin in the Lifetime Movie Network film Taken from Me: The Tiffany Rubin Story. The film was based on true events of the life of a New York woman Tiffany Rubin, whose son Kobe was abducted by his biological father to South Korea. Determined to bring her son back home, she is helped by an organization for lost children which his headed by Mark Miller, portrayed by Terry O'Quinn, and with a plan they are able bring her son back home. Henson's portrayal as Tiffany Rubin received positive reviews which earned her several award nominations including a Primetime Emmy Award for Outstanding Lead Actress in a Miniseries or a Movie.

Henson has guest-starred on several television shows, such as the WB Television Network's Smart Guy, playing the role of Mo'Nique (1997–98); the Fox series House in 2005; and CBS's CSI: Crime Scene Investigation in 2006. She also starred on an episode of Sister, Sister.

Henson has also been a cast member on several television shows, including Lifetime Television's The Division and ABC's Boston Legal for one season. Her recurring appearances in television include the character Angela Scott on ABC's Eli Stone in December 2008. In 2011, Henson was cast in the CBS crime-suspense series Person of Interest. In the Person of Interest November 20, 2013 episode "The Crossing", after co-starring for two and a half years, Henson's character Carter was killed as part of the series' new storyline direction.

In February 2014, several months after her last episode of Person of Interest aired on CBS, Henson was hired by Fox to star in the new TV series pilot Empire, a musical drama set in the hip hop recording industry. Henson plays Cookie Lyon opposite former Hustle & Flow costar Terrence Howard. Fox ordered the pilot to series in May 2014 and the TV series debuted on January 7, 2015 with positive reviews from critics and wide commercial success. Her work as Cookie Lyon gave her widespread recognition and critical acclaim. In July 2015, Henson was nominated for the Primetime Emmy Award for Outstanding Lead Actress in a Drama Series, and she submitted show's Pilot for Emmy voting. In January 2016, Henson won the Golden Globe Award for Best Actress – Television Series Drama for Empire becoming only the third African American actress to take home the award after Gail Fisher (1972) and Regina Taylor (1992).

Henson became pregnant during her junior year of college, and gave birth in 1994 to her son, Marcel Johnson. The father of her son, her high-school sweetheart William Lamar Johnson, was murdered in 2003.