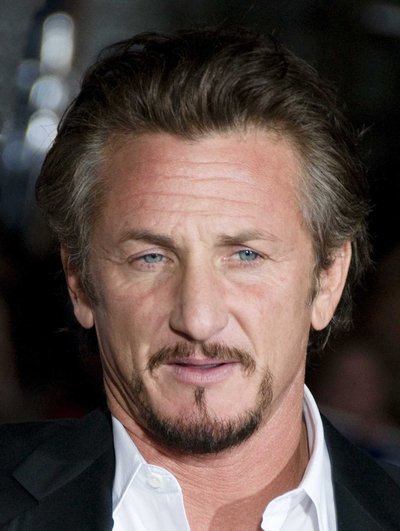 Sean Justin Penn (born August 17, 1960) is an American actor, film director and politician. He has won two Academy Awards, for his roles in the mystery drama Mystic River (2003) and the biopic Milk (2008).

Penn began his acting career in television with a brief appearance in a 1974 episode of Little House on the Prairie, directed by his father Leo Penn. Following his film debut in 1981's drama Taps and a diverse range of film roles in the 1980s, including Fast Times at Ridgemont High, Penn garnered critical attention for his role in the crime drama Carlito's Way (1993). He became known as a prominent leading actor with the 1995 drama Dead Man Walking, for which he earned his first Academy Award nomination and the Best Actor Award at the Berlin Film Festival. Penn received another two Oscar nominations for Woody Allen's comedy-drama Sweet and Lowdown (1999) and the drama I Am Sam (2001), before winning his first Academy Award for Best Actor in 2003 for Mystic River and a second one in 2008 for Milk. He has also won a Best Actor Award of the Cannes Film Festival for the Nick Cassavetes-directed She's So Lovely (1997), and two Best Actor Awards at the Venice Film Festival for the indie film Hurlyburly (1998) and the drama 21 Grams (2003).

Penn made his feature film directorial debut with 1991's The Indian Runner, followed by the drama film The Crossing Guard (1995) and the mystery film The Pledge (2001). In 2002, Penn directed one of the 11 segments of 11'09"01 September 11, a compilation film made in response to the September 11 attacks. His fourth feature film, the biographical drama survival movie Into the Wild (2007), garnered critical acclaim and two Academy Award nominations.

In addition to his film work, Penn is known for his political and social activism, most notably his criticism of the George W. Bush administration, his contact with the Presidents of Venezuela and Cuba, and his humanitarian work in the aftermath of Hurricane Katrina and the 2010 Haiti earthquake. Penn also attracted media attention for his previous marriages to Madonna and actress Robin Wright.

Penn was born in Los Angeles County, California, the son of actor and director Leo Penn and actress Eileen Ryan (née Annucci). His older brother is musician Michael Penn. His younger brother, actor Chris Penn, died in 2006. His paternal grandparents were Jewish emigrants from Lithuania and Russia, while his mother is a Catholic of Irish and Italian descent. Penn was raised in a secular home, and attended Santa Monica High School. He began making short films with some of his childhood friends, including actors Emilio Estevez and Charlie Sheen, who lived near his home.

Penn appeared in a 1974 episode of the Little House on the Prairie television series as an extra when his father, Leo, directed some of the episodes. He launched his film career with the 1981 action-drama Taps, where he played a military high school cadet. A year later, he appeared in the hit comedy Fast Times at Ridgemont High, in the role of surfer-stoner Jeff Spicoli, with his character helping popularize the word "dude" in popular culture. In 1983, Penn appeared as Mick O'Brien, a troubled youth, in the drama Bad Boys. The role earned Penn favorable reviews and jump-started his career as a serious actor.

In 1985, Penn played Andrew Daulton Lee in the film The Falcon and the Snowman, which closely followed an actual criminal case. Lee was a former drug dealer by trade, convicted of espionage for the Soviet Union and originally sentenced to life in prison, later being paroled in 1998. Penn later hired Lee as his personal assistant, partly because he wanted to reward Lee for allowing him to play Lee in the film; he was also a firm believer in rehabilitation and thought Lee should be successfully reintegrated into society, since he was a free man again. In 1986, Penn starred in the drama At Close Range. He stopped acting for a few years in the early 1990s, having been dissatisfied with the industry, and focused on making his directing debut.

Nominated for the Academy Award for Best Actor five times, he has won the award twice. The Academy first recognized his work in nominating him for playing a racist murderer on death row in the 1995 drama film Dead Man Walking. He was nominated again for his comedic performance as an egotistical jazz guitarist in the 1999 film Sweet and Lowdown. He received his third nomination after portraying a mentally handicapped father in 2001's I am Sam. Penn finally won for his role in the 2003 Boston crime-drama Mystic River. In 2004, he played a disturbed man bent on killing the president in The Assassination of Richard Nixon. That year, he was invited to join the Academy of Motion Picture Arts and Sciences.

Penn was engaged to actress Elizabeth McGovern, his co-star in 1984's Racing with the Moon. Penn's personal life began to attract media attention when he married pop singer Madonna in 1985. The two starred in the panned and much-derided Shanghai Surprise, directed by Jim Goddard, and Madonna dedicated her third studio album True Blue to Penn, referring to him in the liner notes as "the coolest guy in the universe". The relationship was marred by violent outbursts against the press, including one incident for which he was arrested for assaulting a photographer on a film set; Penn was sentenced to 60 days in jail in mid-1987, of which he served 33 days. Later in the marriage, Penn was charged with felony domestic assault, a charge for which he pleaded to a misdemeanor. Penn and Madonna divorced in 1989.

He soon began a relationship with actress Robin Wright, and their first child, a daughter named Dylan Frances, was born in 1991. Their second child, a son whom they named Hopper Jack, was born in 1993. Penn and Wright married on April 27, 1996, and lived in Ross, California. The couple filed for divorce in December 2007, but reconciled several months later, requesting a court dismissal of their divorce case. In April 2009, Penn filed for legal separation, only to withdraw the case once again when the couple reconciled in May. On August 12, 2009, Wright Penn filed for divorce again. The couple's divorce was finalized on July 22, 2010, with the couple reaching a private agreement on child and spousal support, division of assets, and custody of Hopper, who was almost 17 at the time. As of June 2014 he is dating actress Charlize Theron.