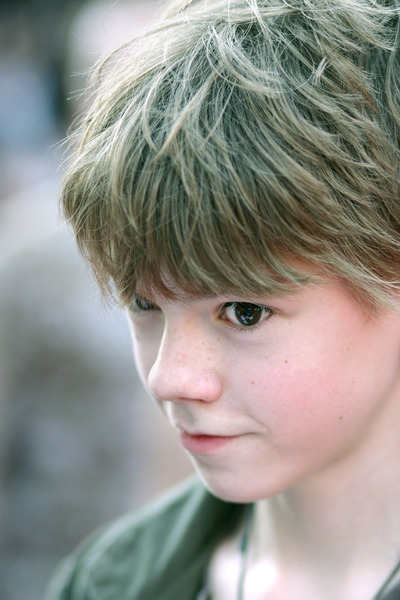 Thomas Brodie-Sangster (born 16 May 1990) is an English actor and musician, known for his role as Jojen Reed in Game of Thrones, his voice as Ferb in Phineas and Ferb and for his role as Sam in Richard Curtis's Love Actually.

Sangster was born in London. He lives with his sister, Ava, and his parents, actors Anastasia "Tasha" (Bertram) and Mark Ernest Sangster. His father is a musician and film editor. Sangster is the second cousin once removed of actor Hugh Grant, alongside whom he appeared in Love Actually; his great-grandmother, Barbara Bertram, and Grant's grandmother were sisters. Sangster's great-grandfather, Anthony Bertram, was a novelist, and one of Sangster's maternal ancestors was politician and colonial administrator Sir Evan Nepean.

Sangster's first acting job was in a BBC television film, Station Jim. He subsequently appeared in a few more television films, including the lead roles in Bobbie's Girl, The Miracle of the Cards (based on the story of Craig Shergold) and Stig of the Dump. He won the "Golden Nymph" award at the 43rd Annual Monte Carlo Television Festival for his role in the miniseries Entrusted. Love Actually, in which he played Liam Neeson's stepson, was Sangster's first major theatrical film. He was nominated for a "Golden Satellite Award" and a "Young Artist Award" for his role in the film.

Sangster next appeared in a television adaptation of the novel Feather Boy and played a younger version of James Franco's role in the film version of Tristan and Isolde. Among other things, Sangster takes part in a (child's) swordfight in the film. Sangster next starred in the commercially successful film Nanny McPhee, as the eldest of seven children.

In 2007 he appeared in a two-part story ("Human Nature" and "The Family of Blood") in Doctor Who as schoolboy Timothy 'Tim' Latimer, and guest-starred in the Doctor Who audio dramas The Mind's Eye and The Bride of Peladon. His voice lowered during filming of the Doctor Who episodes. He also starred alongside Love Actually and Nanny McPhee co-star Colin Firth in the film adaptation of Valerio Massimo Manfredi's historical novel The Last Legion, released in 2007. That same year he voiced the character of Ferb Fletcherin the Disney Channel animated series Phineas and Ferb alongside Love Actually co-star Olivia Olson. As of December 2007, he was also working on the filming of a television series of the story of Pinocchio, filmed in Italy.

Sangster plays the guitar, and he learned to play left-handed in order to portray the left-handed Paul McCartney in the feature film Nowhere Boy. He currently resides in South London, England with his parents and sister.