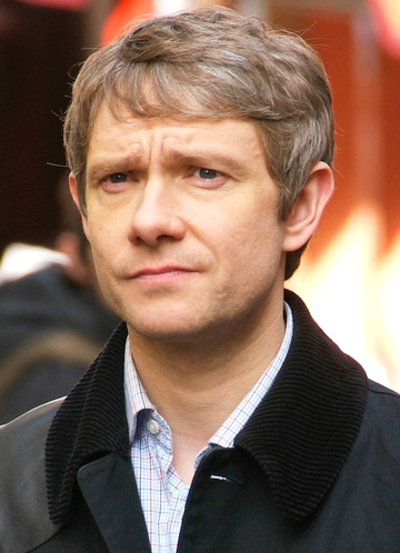 Martin John Christopher Freeman (born 8 September 1971) is an English actor. He is best known for his roles as Tim Canterbury in The Office, Dr. Watson in Sherlock, and Bilbo Baggins in Peter Jackson's three-part adaptation of The Hobbit.

His roles also includes Love Actually, The Hitchhiker's Guide to the Galaxy, Nativity!, and every film of the Three Flavours Cornetto trilogy.

Martin Freeman was born in Aldershot, Hampshire, the youngest of five children. His parents, Philomena (Norris) and Geoffrey Freeman, a naval officer, separated when Freeman was a child, and when Freeman was ten, Geoffrey died of a heart attack. Freeman was raised in a Roman Catholic family and attended the Salesian School in Chertsey, Surrey. Though his family was not strict in their religious practices, his religion had a profound influence on him. As a child, Freeman was asthmatic, and had to undergo a hip operation due to a "dodgy" leg. He was schooled at a Catholic comprehensive before attending Brooklands College to study media studies.

Freeman joined a youth theatre group at 15, but it was not until he was 17 that his confidence in his acting led to the decision to pursue it as a career. He went on to attend the Central School of Speech and Drama.

Freeman resides in Hertfordshire with his partner, actress Amanda Abbington, whom he met on the set of Channel 4’s Men Only in 2000. The couple have a son and daughter, and have since appeared in other productions together, including Swinging with the Finkels, The Debt, The Robinsons and the feature film comedy The All Together.