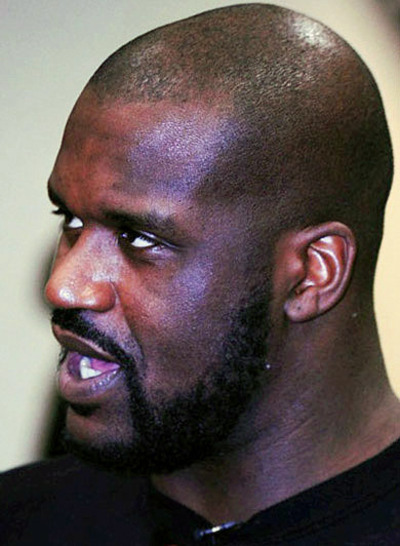 Shaquille Rashaun O'Neal (born March 6, 1972), nicknamed Shaq, is an American retired basketball player, former rapper and current analyst on the television program Inside the NBA. Standing 7 ft 1 in (2.16 m) tall and weighing 325 pounds (147 kg), he was one of the heaviest players ever to play in the NBA. Throughout his 19-year career, O'Neal used his size and strength to overpower opponents for points and rebounds.

Following his career at Louisiana State University, O'Neal was drafted by the Orlando Magic with the first overall pickin the 1992 NBA Draft. He quickly became one of the top centers in the league, winning Rookie of the Year in1992–93 and later leading his team to the 1995 NBA Finals. After four years with the Magic, O'Neal signed as a free agent with the Los Angeles Lakers. He won three consecutive championships in 2000, 2001, and 2002. Amid tension between O'Neal and Kobe Bryant, O'Neal was traded to the Miami Heat in 2004, and his fourth NBA championship followed in 2006. Midway through the 2007–2008 season he was traded to the Phoenix Suns. After a season-and-a-half with the Suns, O'Neal was traded to the Cleveland Cavaliers in the 2009–10 season. O'Neal played for the Boston Celtics in the 2010–11 season before retiring.

O'Neal's individual accolades include the 1999–2000 MVP award, the 1992–93 NBA Rookie of the Year award, 15 All-Star game selections, three All-Star Game MVP awards, three Finals MVP awards, two scoring titles, 14 All-NBA team selections, and three NBA All-Defensive Team selections. He is one of only three players to win NBA MVP, All-Star game MVP and Finals MVP awards in the same year (2000); the other players are Willis Reed in 1970 and Michael Jordan in 1996 and 1998. He ranks 6th all-time in points scored, 5th infield goals, 13th in rebounds, and 7th in blocks.

In addition to his basketball career, O'Neal has released four rap albums, with his first, Shaq Diesel, going platinum. He has appeared in numerous films and has starred in his own reality shows, Shaq's Big Challenge and Shaq Vs..

O'Neal was born in Newark, New Jersey. He remains estranged from his biological father, Joseph Toney of Newark. Toney, who was once an All-State guard in high school who was offered a basketball scholarship to play at Seton Hall, struggled with drug addiction and was, by 1973, imprisoned for drug possession when O'Neal was an infant. Upon his release, Toney did not resume a place in O'Neal's life and instead, agreed to relinquish his parental visitation rights to O'Neal's stepfather, Phillip A. Harrison, a career Army Reserve sergeant, and his mother, Lucille (née O'Neal). O'Neal and Toney have never spoken, and O'Neal has expressed no interest in establishing a relationship. On his 1994 rap album, Shaq Fu: The Return, O'Neal voiced his feelings of disdain for Toney in the song "Biological Didn't Bother", dismissing him with the line "Phil is my father."

O'Neal credits the Boys and Girls Club of America in his hometown of Newark, New Jersey, with giving him a safe place to play and keeping him off the streets. "It gave me something to do," he said. "I'd just go there to shoot. I didn't even play on a team." He led his Robert G. Cole High School team, from San Antonio, Texas, to a 68–1 record during his two years there and helped the team win the state championship during his senior year. His 791 rebounds during the 1989 season remains a state record for a player in any classification.

O'Neal married Shaunie Nelson on December 26, 2002. The couple have four children (Shareef, Amirah, Shaqir, and Me'arah), and Nelson has one son from a previous relationship (Myles). O'Neal also has a daughter from a previous relationship (Taahirah). On September 4, 2007, O'Neal filed for divorce from Shaunie in a Miami-Dade Circuit court. Shaunie later said that the couple had gotten back together and that the divorce was withdrawn. However, on November 10, 2009, Shaunie filed an intent to divorce, citing irreconcilable differences. In summer 2010, O'Neal began dating reality TV star Nikki "Hoopz" Alexander. The couple resided at O'Neal's home in Sudbury, Massachusetts.