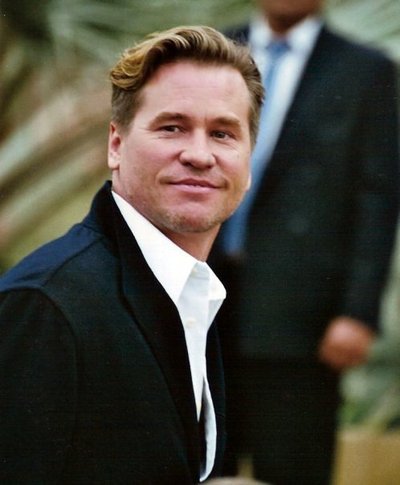 Val Edward Kilmer (born December 31, 1959) is an American actor. Originally a stage actor, Kilmer became popular in the mid-1980s after a string of appearances in comedy films, starting with Top Secret! (1984), then the cult classic Real Genius (1985), as well as the blockbuster action films Top Gun and Willow.

Kilmer was born in Los Angeles, California, the son of Gladys (née Ekstadt) and Eugene Kilmer, an aerospace equipment distributor and real estate developer. He grew up in the San Fernando Valley with his two siblings, older brother Mark and younger brother Wesley (1962–1977), who died at 15 due to an epileptic seizure in a swimming pool. His parents divorced when he was nine years old. His father passed away while Val was filming Tombstone. Kilmer's grandfather was a gold miner in New Mexico, near the border with Arizona; The poet Joyce Kilmer is a distant cousin of Kilmer's. His mother was of Swedish descent, and his father's ancestry reportedly included German, Irish, and Cherokee Native American. Kilmer attended Berkeley Hall School, a Christian Science school in Los Angeles, until 9th grade. He then attended Chatsworth High School—where his classmates included Kevin Spacey and Mare Winningham—as well as the Hollywood Professional School. At the age of 17, he became the youngest person at the time to be accepted into the Juilliard School's Drama Division, where he was a member of Group 10 (1977–1981).

In 1981, while at Juilliard, Kilmer co-authored and starred in the play How It All Began, which was performed at the Public Theater at the New York Shakespeare Festival. Kilmer turned down a role in Francis Ford Coppola's 1983 film, The Outsiders, as he had prior theatre commitments.

His big break came when he received top billing in the comedy spoof of spy movies Top Secret!, where he played an American rock and roll star. Kilmer sang all the songs in the film and released an album under the film character's name, "Nick Rivers".

During a brief hiatus, he backpacked throughout Europe before going on to play the lead character in the 1985 comedy Real Genius. He turned down roles in Dune and Blue Velvet before being cast as naval aviator "Iceman" in the action film Top Gun alongside Tom Cruise. Top Gun grossed a total of $344,700,000 worldwide and made Kilmer a major star.

In December 1993, Batman Forever director Joel Schumacher had seen Tombstone and was most impressed with Kilmer's performance as Doc Holliday. Schumacher felt him to be perfect for the role of the Caped Crusader, though at the time, the role was still Michael Keaton's.

In July 1994, Keaton decided not to return for a third Batman film after 1992's Batman Returns, due to "creative differences." William Baldwin (who previously worked with Schumacher on Flatliners) was reported to be a top contender, though just days after Keaton dropped out, Kilmer was cast. Kilmer took the role without even knowing who the new director was and without reading the script.

Kevin Spacey told James Lipton on Inside the Actors Studio, that one of the turning points of his life was at a high school drama festival when he saw Kilmer and Mare Winningham perform a scene from The Prime of Miss Jean Brodie and the drama teacher, Robert Correlli, invited him to transfer to Chatsworth High School; he accepted. In the same interview, Spacey said he went to Juilliard because Kilmer did. Kilmer was at that time the youngest person ever admitted to Juilliard.

Even though he has had a reputation of being difficult, Warwick Davis, Kilmer's co-star from the 1988 fantasy Willow, in his audio commentary for the film said that the question he's most asked is what it was like working with Kilmer, Davis describes him as a very funny man and a hard working, dedicated actor.

Other actors have noted that he prepares for his roles extensively and meticulously. Irwin Winkler (director of At First Sight) talked about his decision to hire Kilmer. "I'd heard the stories, so I checked him out. I called Bob De Niro and Michael Mann, who'd worked with him on Heat, and they both gave him raves... I had a wonderful experience in spite of all the naysayers." Jeffrey Katzenberg (producer of Prince of Egypt) talks about the actor. "Val was one of the first people cast in The Prince of Egypt. He was there every step of the way; patient, understanding, and phenomenally generous with his time."

On May 5, 2012, Kilmer was awarded an honorary doctorate of Fine Arts from William Woods University.