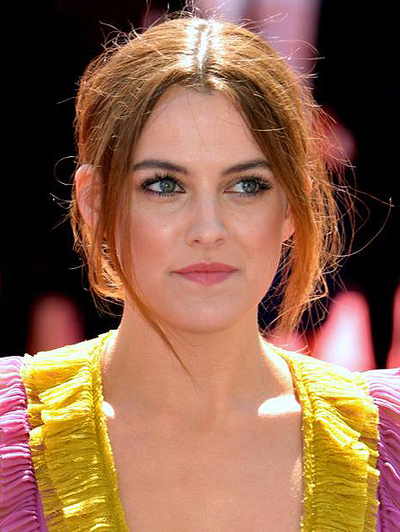 Danielle Riley Keough (born May 29, 1989) is an American actress and producer. She is the daughter of singer-songwriter Lisa Marie Presley with Danny Keough, and the eldest grandchild of Elvis and Priscilla Presley. From 1994 to 1996, Michael Jackson was her stepfather.

Keough is best known for her collaborations with director Steven Soderbergh, having appeared in his films Magic Mike (2012) and Logan Lucky (2017), as well as starring in the first season of the Soderbergh-produced television series The Girlfriend Experience (2016), based on his film of the same name. For her performance as Christine Reade, a law student who moonlights as an escort, Keough earned a Golden Globe nomination for Best Performance by an Actress in a Limited Series or Motion Picture Made for Television.

She is also known for her role in George Miller's Mad Max: Fury Road (2015) and for her extensive work in independent film. She appeared in Andrea Arnold's American Honey in 2016, for which she received an Independent Spirit Award nomination for Best Supporting Female.

Keough was born in Santa Monica, California, the daughter of singer-songwriter Lisa Marie Presley and musician Danny Keough. She is the eldest grandchild of singer and actor Elvis Presley and actress and businesswoman Priscilla Presley. She has one brother, Benjamin Storm Keough, and two half-sisters, twins Harper and Finley, from her mother's fourth marriage, to Michael Lockwood. She has distant Creek and Cherokee heritage.

In 2010 at the age of 20, Keough made her film debut in The Runaways based on the 1970s all-girl rock band of the same name. Keough portrayed the role of Marie Currie, the sister to Cherie Currie, the band's lead singer, portrayed by Dakota Fanning. The film also starred Kristen Stewart and Tatum O'Neal and premiered in 2010 at the Sundance Film Festival to favorable reviews.

In April 2011, Keough starred as the female lead in the drama The Good Doctor alongside Orlando Bloom and Taraji P. Henson. Keough portrayed Diane Nixon, a young patient with a kidney infection who's kept ill in order to make her doctor gain the respect he craves. The film received mixed reviews from critics. In May 2010, she replaced actress Olivia Thirlby as the protagonist in the werewolf drama Jack & Diane alongside Juno Temple, who portrays her love interest. Filming took place in New York City, and in May 2011 Magnolia Pictures picked up the film for distribution; it was released in November 2012.

In September 2011, Keough joined the Steven Soderbergh film Magic Mike, alongside Channing Tatum, Matthew McConaughey and Alex Pettyfer, about a group of male strippers. Keough portrayed the role of Nora, a young stripper. The film was released in June 2012.

Keough co-starred in the independent drama Yellow, alongside Sienna Miller, Luke Wilson and David Morse. On August 4, 2013, the Australian fashion brand Bonds announced that Keough had been signed as "Summer 2013 ambassador". In October 2013, Keough co-starred in the video for Justin Timberlake's "TKO", portraying a bitter girlfriend who knocks out Timberlake and ties him to the back of a pick-up truck, dragging him through the desert and throwing him off a cliff.

Keough appeared in director So Yong Kim's short film Spark and Light commissioned by fashion brand Miu Miu in 2014. Keough had a supporting role in Mad Max: Fury Road, the fourth installment of the Mad Max series. The film was released in May 2015 to critical acclaim receiving numerous Academy Award nominations including Best Picture.

On September 22, 2014, Keough was announced as the lead role in the TV series The Girlfriend Experience, based on the film of the same name from director Steven Soderbergh. The series was issued a 13-episode order and premiered on Starz on April 10, 2016. Her performance in The Girlfriend Experience garnered rave reviews and awards buzz from critics. She went on to receive a Golden Globe nomination for Best Performance by an Actress in a Limited Series or Motion Picture Made for Television.

In 2016, Keough appeared in Andrea Arnold's film American Honey, alongside Shia Laboeuf. The film premiered in competition at the 2016 Cannes Film Festival, where it won the Jury Prize. Keough received praise for her role in the film, and received a nomination at the Film Independent Spirit Awards for Best Supporting Female. In 2017, she appeared in The Discovery directed by Charlie McDowell. It had its world premiere at the Sundance Film Festival on January 20, 2017, and was released on March 31, 2017, by Netflix. In the summer she co-starred in the thriller/horror film It Comes at Night, opposite Joel Edgerton and Christopher Abbott, and directed by Trey Edward Shults.

In August 2017 it was announced that Keough had launched production company called Felix Culpa with producer Gina Gammell. Plans are already in place to adapt three novels, including: Sweet Lamb of Heaven: A Novel, the graphic novel Heartthrob, and The Curse of Beauty: The Scandalous & Tragic Life of Audrey Munson, America’s First Supermodel.

She has also appeared in Steven Soderbergh's Logan Lucky, and will appear in Justin Kelly's Welcome the Stranger, opposite Abbey Lee and Caleb Landry Jones, Hold the Dark directed by Jeremy Saulnier, and The House That Jack Built directed by Lars Von Trier.

Keough began dating stuntman Ben Smith-Petersen in 2012, whom she met while filming Mad Max: Fury Road and on August 14, 2014, Keough announced their engagement. The couple married on February 4, 2015, in Napa, California.