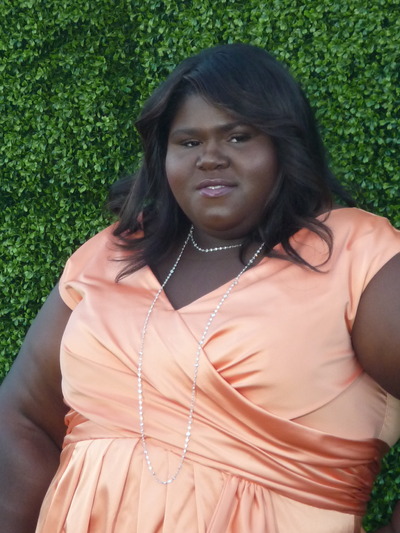 Gabourey "Gabby" Sidibe (born May 6, 1983) is an American actress who made her acting debut in the 2009 film Precious, a role that brought her a nomination for the Academy Award for Best Actress. From 2010 to 2013, she was a main cast member of the Showtime series The Big C. Sidibe co-starred on the television series American Horror Story: Coven as Queenie.

Sidibe was born in Bedford–Stuyvesant, Brooklyn, New York, and was raised in Harlem. Her mother, Alice Tan Ridley, is an American R&B and gospel singer who appeared on the fifth season of America's Got Talent, on June 15, 2010. Her father, Ibnou Sidibe, is from Senegal and is a cab driver. She has attended Borough of Manhattan Community College, City College of New York, and Mercy College. She worked at the Fresh Air Fund's office as a receptionist before she went on to pursue a career in acting.

In Precious, Sidibe plays the main character, Claireece "Precious" Jones, an obese 16-year-old girl with two children (both of whom are the results of being raped by her father) trying to escape abuse at the hands of her mother. The film won numerous awards, including two Academy Awards, a Golden Globe Award and Sundance Film Festival Grand Jury Award. On December 15, 2009, she was nominated for a Golden Globe in the category of Best Performance by an Actress in a Motion Picture Drama for her performance in Precious. The next month she received an Academy Award nomination for Best Actress.