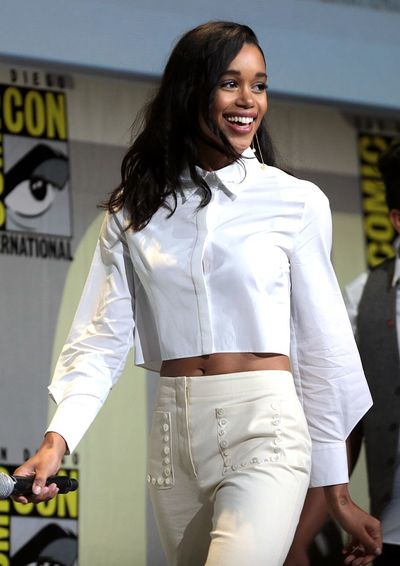 Laura Ruth Harrier (born March 28, 1990) is an American actress and model. Harrier was first recognized for her portrayal of Destiny Evans in the short-lived reboot of the American soap opera One Life to Live in 2013. In 2017, she will have her major film debut, portraying Liz in Spider-Man: Homecoming.

Harrier attended Evanston Township High School from 2004-2008 in Evanston, IL. Her father works in insurance and her mother is a speech pathologist. She has one brother.

Harrier is best known for portraying Liz in Spider-Man: Homecoming (2017). In June of 2017, it was announced that Harrier would be portraying Millie Montag in HBO's film adaptation of acclaimed novel Fahrenheit 451, opposite Michael B. Jordan.

Alongside acting, Harrier is an international model who has worked on numerous campaigns with companies such as American Eagle, L'Oréal, and Target and has turned up on the pages of Cosmopolitan, Elle, and Glamour.

In 2016, Harrier starred in The Realest Real, a short film directed by Carrie Brownstein for luxury French fashion brand Kenzo. Harrier is currently an ambassador for luxury Italian jewelry brand Bvlgari alongside the likes of Bella Hadid, Alicia Vikander, and Lily Aldridge.

Harrier is becoming increasingly known in the fashion world because of her simple style that makes a bold statement. Renowned fashion websites and magazines such as Vogue have taken notice.