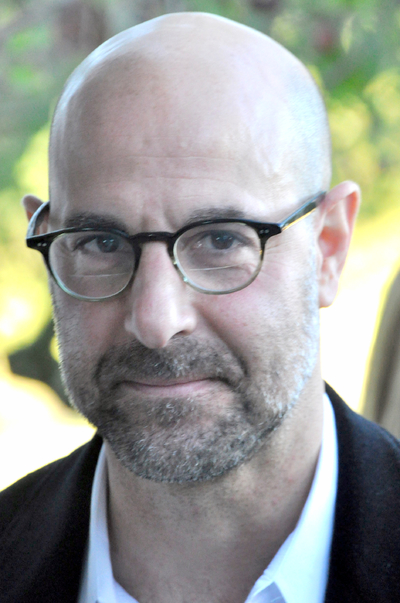 Tucci was born in Peekskill, New York, and grew up in nearby Katonah, the son of Joan (née Tropiano), a secretary and writer, and Stanley Tucci, Sr., an art teacher at Horace Greeley High School in Chappaqua, New York. His parents, both of Italian descent, had roots in Calabria. He is the oldest of three children; his sister is actress Christine Tucci. Screenwriter Joseph Tropiano is a cousin. During the early 1970s, the family spent a year living in Florence, Italy. He attended John Jay High School, followed by SUNY Purchase, where he majored in acting and graduated in 1982.

Tucci earned his Actors' Equity card in the year that actress Colleen Dewhurst, the mother of Tucci's high-school friend, actor Campbell Scott, arranged for the two young men to have parts as soldiers in a Broadway play in which she was co-starring, The Queen and the Rebels, premiering September 30, 1982. His film debut was in Prizzi's Honor (1985). He performed at the Yale Repertory Theater in 1991 in a Molière play. Tucci is known for his work in films such as The Pelican Brief, Beethoven, Kiss of Death, Road to Perdition and Big Night, and in the television series Murder One as the mysterious Richard Cross. Big Night (1996), which he starred in, co-wrote with his cousin Joseph Tropiano, and co-directed with Scott, premiered at the Sundance Film Festival. The film also featured his sister Christine and their mother, who wrote a cookbook for the film. It won him and Tropiano the Independent Spirit Award for Best First Screenplay.

He has been nominated three times for Golden Globes, and won twice – for his title role in Winchell (1998), and for his supporting role as Adolf Eichmann in Conspiracy (2001), both for HBO films. He also received a Screen Actors Guild Award nomination for Winchell. He was nominated for Broadway's Tony Award as Best Actor in a Play for his role as Johnny in the 2002 revival of Terrence McNally's Frankie and Johnny in the Clair de Lune.

Tucci's first wife was Kathryn Louise Spath-Tucci (1962–2009), also known as Kate Tucci, who died of breast cancer. She was a social worker and the former wife of actor and stage manager Alexander R. Scott, the elder son of actors Colleen Dewhurst and George C. Scott. She and Tucci married in 1995 and had three children: twins Isabel Concetta and Nicolo Robert (born in 2000) and Camilla (born in 2002). The couple also raised Spath-Tucci's two children from her previous marriage.

In 2011, Tucci became engaged to Felicity Blunt, an English literary agent and the elder sister of Tucci's The Devil Wears Prada co-star Emily Blunt, who introduced the couple several years after they worked together on Prada. Tucci and Blunt married in a civil service in summer 2012, followed by a larger ceremony at Middle Temple Hall in London on September 29, 2012. On October 19, 2014, Tucci and Blunt announced that they are expecting their first child together.