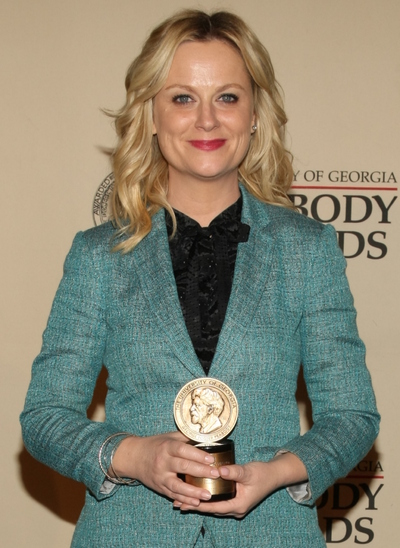 Amy Meredith Poehler (born September 16, 1971) is an American actress, comedian, voice artist, producer and writer. Raised in Burlington, Massachusetts, she graduated from Boston College in 1993 and moved to Chicago, Illinois, to study improv at The Second City and ImprovOlympic. In 1996, she moved to New York City after becoming part of the improvisational comedy troupe Upright Citizens Brigade, which later developed into an eponymous television show that aired on Comedy Central for three seasons. Poehler was also one of the founding members of the Upright Citizens Brigade Theatre in 1999.

Poehler was a cast member on the NBC television show Saturday Night Live from 2001 to 2008. In 2004, she became the co-anchor of the Weekend Update sketch along with her friend and colleague Tina Fey. Poehler's work on SNL earned her two Primetime Emmy Award nominations for Outstanding Supporting Actress in a Comedy Series. She is known for voicing Bessie Higgenbottom in the 2008–11 Nickelodeon series, The Mighty B! and Eleanor Miller in the Alvin and the Chipmunks CGI films. Since 2009, she has starred as Leslie Knope in the sitcom Parks and Recreation, for which she has received five straight nominations for the Primetime Emmy Award for Outstanding Lead Actress in a Comedy Series, and three straight Golden Globe Award for Best Actress in a Television Musical or Comedy Series nominations, with one win in 2014.

Poehler is currently serving as an Executive Producer in the new Swedish-American sitcom Welcome to Sweden along with her brother Greg Poehler. The series is currently being broadcast on NBC.

Born in Newton, Massachusetts to high school teachers Eileen Frances (née Milmore) and William Grinstead Poehler, Amy Poehler grew up in nearby Burlington. Poehler is of English, German, Irish, and Portuguese ancestry and was raised in the Catholic faith. She graduated from Burlington High School in 1989.

While attending Boston College, Poehler was a member of America's oldest collegiate improv comedy troupe, "My Mother's Fleabag". Poehler graduated from Boston College with a bachelor's degree in media and communications in 1993 and moved to Chicago, where she studied improvisational theatre at Second City, with friend and future co-star Tina Fey. Poehler also studied with Del Close at ImprovOlympic.

Her brother Greg Poehler is a producer and actor.

During her time at Second City and Improv Olympic in Chicago, Poehler studied under Del Close and Charna Halpern along with Matt Besser, where they were part of the original improv team called the Upright Citizens Brigade. While the group initially consisted of many members (including Horatio Sanz, Adam McKay, Rick Roman, and Neil Flynn), Poehler quickly became part of the group along with Matt Walsh. The two, along with Besser and Ian Roberts, performed sketch and improv around Chicago before moving to New York in 1996. Immediately after moving to New York, the group quickly scored a TV gig, appearing as sketch regulars on Late Night with Conan O'Brien.

Poehler married actor Will Arnett on August 29, 2003, and had a recurring role on the series Arrested Development as the wife of Arnett's character Gob Bluth. They also played a quasi-incestuous brother-sister ice skating team in the 2007 film Blades of Glory, and appeared together in Horton Hears a Who!, On Broadway, Spring Breakdown, and Monsters vs. Aliens, along with Arnett having a guest appearance on Poehler's NBC comedy Parks and Recreation and both did voice acting in The Secret World of Arrietty.

In September 2012, Poehler and Arnett announced that they were ending their nine-year marriage. Poehler has since been linked to actor Nick Kroll, whom she began dating in early 2013.