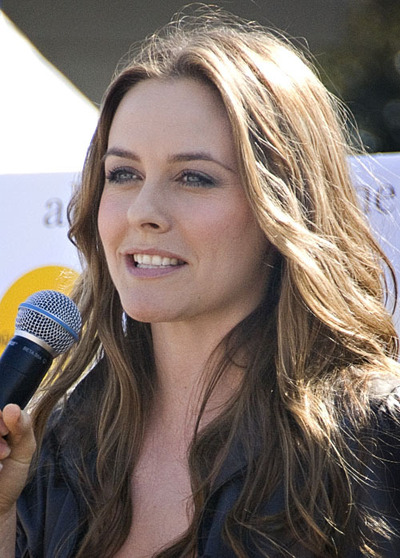 Alicia Silverstone (born October 4, 1976) is an American actress, producer, author, and activist. Silverstone made her film debut in The Crush, earning the 1994 MTV Movie Award for Best Breakthrough Performance, and gained further prominence as a teen idol when she appeared in three music videos for the band Aerosmith. She starred in the 1995 sleeper hit Clueless (which earned her a multi-million-dollar deal with Columbia) and in the big-budget 1997 film Batman & Robin, in which she played Batgirl. She has continued to act in film and television and on stage. A vegan, Silverstone endorsed PETA activities and published a book titled The Kind Diet.

Silverstone was born in San Francisco, California, the daughter of British parents Deirdre "Didi" (née Radford), a Scottish former Pan Am flight attendant, and Monty Silverstone, an English real estate agent. She grew up in Hillsborough, California. Her father was born to a Jewish family and her mother converted to Conservative Judaism before marriage. Silverstone began modeling when she was six years old, and was subsequently cast in television commercials, the first being for Domino's Pizza.[9] She attended Crocker Middle School and then San Mateo High School.

Her first credited acting role was in The Wonder Years starring Fred Savage in the episode entitled "Road Test", as Savage's high school "dream girl". Silverstone then won a leading part in the 1993 film The Crush, playing a teenaged girl who sets out to ruin an older man after he spurns her affections; she won two awards at the 1994 MTV Movie Awards for the role—Best Breakthrough Performance and Best Villain. Silverstone became legally emancipated at the age of 15 in order to work the hours required for the shooting schedule of the film. Silverstone made some television movies in her early career including Torch Song, Cool and the Crazy and Scattered Dreams. In addition, Silverstone was almost chosen to play the lead role of Angela Chase in the critically acclaimed cult television series My So-Called Life before production of the pilot episode began. The role eventually went to Claire Danes.

After seeing her in The Crush, Marty Callner decided Silverstone would be perfect for a role in a music video he was directing for the band Aerosmith, called "Cryin'"; she was subsequently cast in two more videos, "Amazing" and "Crazy." These were hugely successful for both the band and Silverstone, making her a household name (and also gaining her the nickname, "the Aerosmith chick"). After seeing Silverstone in the three videos, filmmaker Amy Heckerling decided to cast her in Clueless.

Silverstone's next role was as Batgirl in Batman & Robin, and while it was not a critical success, the film grossed $238,207,122 worldwide. Silverstone's turn as Batgirl was not well received, and won her a Razzie Award for Worst Supporting Actress. She also, however, won a Blimp Award at the Kid's Choice Awards for the role. Also released in 1997 was Excess Baggage, the first movie by Silverstone's production company, First Kiss Productions. She starred alongside Benicio del Toro and Christopher Walken.

In 1999, Silverstone starred in the Saturn Award-nominated romance/comedy film Blast from the Past which also stars Brendan Fraser, Christopher Walken and Sissy Spacek. In VH1's 40 Hottest Hotties of the '90s she was ranked #5.

Silverstone has two older siblings, a half-sister from her father's previous marriage named Kezi Silverstone and a brother named David Silverstone. She married her longtime boyfriend, rock musician Christopher Jarecki, in a beachfront ceremony at Lake Tahoe on June 11, 2005. After meeting outside a movie theater in 1997, the couple dated for eight years prior to their marriage. They got engaged about a year before their marriage, and Jarecki presented Silverstone with an engagement ring that had belonged to his grandmother. They live in an eco-friendly Los Angeles house, complete with solar panels and an organic vegetable garden. Silverstone bought the house, shared with a "menagerie of rescued dogs", in 1996.

In 2009, Silverstone released The Kind Diet, a guide to vegan nutrition, and launched its associated website The Kind Life. The Kind Diet has topped the Hardcover Advice & Misc. category of The New York Times Best Seller list. In 2014, her follow up book The Kind Mama was published. She plans to write a third, The Kind Diet Cookbook.

In May 2011, Silverstone gave birth to a boy, whom they named Bear Blu Jarecki. In March 2012, she received media attention for uploading a video of herself feeding pre-chewed food to her son from her own mouth.