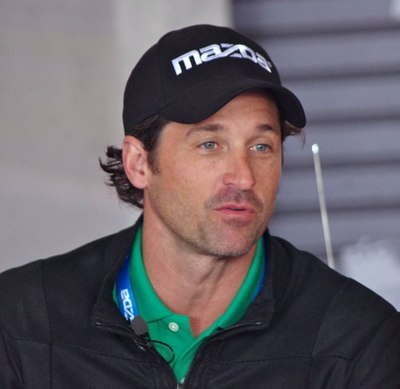 Dempsey, who maintains a sports car and vintage car collection, also enjoys auto racing in his spare time. He has competed in prestigious pro-am events such as the 24 Hours of Le Mans, Rolex 24 at Daytona sports car race, and Ensenada SCORE Baja 1000 off-road race. Prior to the 2013 24 Hours of Le Mans, Dempsey declared that he would "walk away" from acting if he could and dedicate himself full-time to motorsports.

Dempsey was born in Lewiston, Maine, and grew up in the nearby towns of Turner and Buckfield. He has two sisters. His mother, Amanda (née Casson), was a school secretary, and his father, William, was an insurance salesman.

In his youth, Patrick Dempsey participated in juggling competitions. In 1981 he achieved the second place at the International Jugglers' Association Championship in the Juniors category, just behind Anthony Gatto, who is considered to be the best technical juggler of all time.

Dempsey was diagnosed with dyslexia at age twelve. He told Barbara Walters on her 2008 Oscar special that he thinks dyslexia made him what he is today. "It's given me a perspective of—you have to keep working," Dempsey told Walters. "I have never given up."

Dempsey was discovered by an invitation to audition for a role in the stage production of Torch Song Trilogy. His audition was successful, and he spent the following four months touring with the company in Philadelphia. He followed this with another tour, Brighton Beach Memoirs, in the lead role, which was directed by Gene Saks. Dempsey has also made notable appearances in the stage productions of On Golden Pond, with the Maine Acting Company, and as Timmy (the Martin Sheen role) in a 1990 Off-Broadway revival of The Subject Was Roses co-starring with John Mahoney and Dana Ivey at the Roundabout Theatre in New York.

Dempsey's first major feature film role was at age 21 with Beverly D'Angelo in the movie In The Mood, the true World War II story about Ellsworth Wisecarver whose relationships with older married women created a national uproar. He then co-starred in the third instalment of the comedy classic Meatballs III: Summer Job, alongside Sally Kellerman in 1987. This was followed by the teen comedy Can't Buy Me Love in 1987 with actress Amanda Peterson and Some Girls with Jennifer Connelly in 1988. In 1989, Dempsey had the lead role in the films Loverboy with actress Kirstie Alley and Happy Together with actress Helen Slater.

Dempsey made a number of featured appearances in television in the 1990s; he was cast several times in pilots that were not picked up for a full season, including lead roles in the TV versions of the films The Player and About A Boy. However he received good reviews as he portrayed real-life mob boss, Meyer Lansky in 1991, when Mobsters was put on the screen. His first major television role was a three-episode stint as Will Truman's closeted sportscaster boyfriend on Will & Grace. He went on to play the role of Aaron Brooks on Once & Again. Dempsey received an Emmy nomination in 2001 as Outstanding Guest Actor in a Drama Series for the role of Aaron. In 1993, he played a young John F. Kennedy in the two-part TV mini-series JFK: Reckless Youth. In 2000, he played Detective Kincaid in Scream 3.

Dempsey had a high-profile role as the fiancé of Reese Witherspoon's character in Sweet Home Alabama (2002). In 2004, he co-starred in the highly acclaimed HBO production Iron Jawed Angels, opposite Hilary Swank and Anjelica Huston. He also appeared as special guest star in The Practice for its three-episode finale season (8x13-8x15).

In 2007, Dempsey starred in the Disney film Enchanted, and the Paramount Pictures film Freedom Writers where he reunited with his Iron Jawed Angels co-star Hilary Swank. He also voiced the character Kenai in Brother Bear 2. Dempsey's most recent roles include the 2008 film Made of Honor as Tom and the 2010s romantic comedy Valentine's Day; the latter film follows five interconnecting stories about Los Angelinos anticipating (or in some cases dreading) the holiday of love.

Universal Pictures acquired the rights to the prize-winning novel The Art of Racing in the Rain in July 2009, for Dempsey to star in. The project has not been able to find a director. He starred as Dylan Gould in Transformers: Dark of the Moon (2011).

In 2013, Dempsey starred in the romantic comedy Wonderful Tonight opposite Amanda Seyfried.

Dempsey has received significant public attention for his iconic role as Dr. Derek Shepherd (McDreamy) in the drama Grey's Anatomy. Prior to landing the role of Derek Shepherd, Dempsey auditioned for the role of Dr. Chase on another medical show, House. Initially a midseason replacement, Grey's Anatomy was well received and has become a highly rated program. Dempsey also appeared in two episodes of the Grey's spinoff Private Practice, playing the same character as in Grey's Anatomy. In January 2014, Dempsey signed a two-year contract to remain on Grey's Anatomy (then in its tenth season) that would ensure his presence for potential 11th and 12th seasons. Dr. Shepherd later died in Season 11 due to a horrible car crash leaving Meredith Grey in sadness.

Dempsey was nominated for Best Performance by an Actor in a Television Series–Drama at the 2006 Golden Globes for the role. His success on the show has led to his becoming a spokesman for Mazda and State Farm Insurance. BuddyTV ranked him #1 on its list of "TV's Sexiest Men of 2011".

Following his departure from Grey's Anatomy, Dempsey was working on two small-screen projects: a drama The Limit for SundanceTV and a travelogue spy thriller called Fodors. He also said: "I would love to do something else. I’m going to take the rest of the year off to develop. I would like to be a producer. I would commit to a show that is 10 to 12 episodes. But 24 again, I don’t know if I would do that. It's a very hard life. It's financially rewarding but there comes a point where how much is enough, really? I’m focusing now on developing and racing and being a father to my children."

In 2014, Dempsey told Reuters in the Hockenheimring support paddock at the German Grand Prix that motor racing was not just a hobby, and had become as much a part of who he is as acting. He said, "It's all-consuming in many ways. I couldn't imagine not racing right now. It really keeps me motivated. It's all I think about on a daily basis."

Dempsey was diagnosed with dyslexia at age 12. As a result, it is necessary for him to memorize all his lines in order to perform, even for auditions where he was unlikely to get the part.

Entertainment Weekly put Dempsey's hair on its end-of-the-decade "best-of" list, saying, "What made Grey's Anatomy a mega-medi-hit? It could have something to do with creator Shonda Rhimes' scalpel-sharp writing…or McDreamy's impossibly luxurious man hair. Just saying." In 2005, People magazine ranked him second in its annual list of "Sexiest Men Alive" and again in 2006.

Dempsey has been married twice. In 1987, he married his manager and mother of his best friend, actress and acting coach, Rochelle "Rocky" Parker, when he was 21 and she 48. She appeared with Dempsey in the film In the Mood. The couple divorced in 1994. She died in 2014.