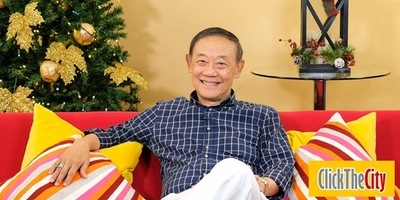 José "Joe" Mari Lim Chan (born March 11, 1945 in Iloilo City) is a Chinese Filipino singer, songwriter and businessman in the sugar industry. He is currently chairman and CEO of Binalbagan Isabela Sugar Company, Inc. (BISCOM) and A. Chan Sugar Corporation. He is also the chairman and president of Signature Music, Inc.

Chan was born on March 11, 1945 in Iloilo City and was the first-born child of Antonio Chan and Florencia Lim. His father was a immigrant from Fujian, China who came to the Philippines at age 13 and started a sugar trading company in Bacolod. Chan's mother was the only child of a Chinese-Filipino couple.

Chan was exposed to music in his childhood with his maternal grandmother from Cebu often playing music at their house and his mother being a pianist. He was also accompanied by the family's house helper to participate in the radio program Children’s Hour on DYRI where children performed the piano, sang, and recited poetry. At school he was often selected to perform in school programs and Paul Anka and Neil Sedaka among the song-writers which served as his inspiration in his childhood. Chan wrote his first song at age 13. Chan's father was supportive of his involvement in Children's Hour but was reluctant of supporting his music career by the time he was age 14 or 15 when he began composing songs. His father was concerned their Chinese background would put Chan in a disadvantage in the music industry and encouraged him to relegate his music pursuits as a hobby and pursue a business career instead.

Chan attended the Ateneo de Manila University where he graduated with a Bachelor of Arts Degree in Economics in 1967.

Chan first appeared on the local scene as the host and singer of a television show called 9 Teeners of ABS-CBN whicha aired on weekdays and Saturday in 1966. Since he was a junior student at that time at Ateneo and he was being encouraged to become a businessman, his father only consented his involvement if he was not paid salary for the stint. His first single "Afterglow" was released in 1967 after he was approached by an independent record producer.

His first long playing album Deep in My Heart was issued in 1969. In 1973, he represented the Philippines in the World Popular Song Festival in Tokyo where his song "Can We Just Stop And Talk Awhile" went into the final entries.

In 1975, he moved to the United States to run a branch office of their family's sugar business and remained there for 11 years. In 1986, he returned to the Philippines and went back to the music industry with the release of his album A Golden Collection.

In 1989, he released his album Constant Change. It was named Album of the Year by the Awit Awards, the local equivalent of the American Grammy Awards and reached the Diamond Record in terms of sales. The Diamond Award is for albums or singles selling ten million units.[10] It also sold in other Asian countries such as Malaysia, Singapore and Indonesia.

In 1990, his Christmas album, Christmas in Our Hearts was released. It reached triple platinum status that same year, eventually earning the Double Diamond Record Award in 1995, for selling over 20 million units. The significant popularity of his iconic Christmas songs and the album during the holiday season annually earned him the title of "Father of Philippine Christmas Music".

In 1994 he released his eighth album, Thank You Love, where he has another song "Is She Thinking About Me" with Christine Bersola-Babao and another christmas song, "Christmas Past". His 2001 album A Heart's Journey won Album of the year in the Awit Awards. In 2005, he composed "We're All Just One" as the theme song of the 2005 Southeast Asian Games. In 2007, he released his 12th album Love Letters and Other Souvenirs.

In 2009, Chan was inducted to the Philippines Eastwood City Walk Of Fame.

In 2011, he released his 13th full-length album, The Manhattan Connection: The Songs of Jose Mari Chan. The album, which was produced by Janis Siegel of The Manhattan Transfer. The songs were reimagined by music producer Yaron Gershovsky.