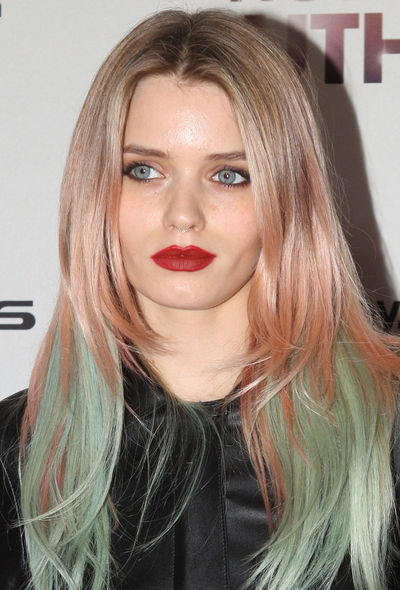 Abbey Lee Kershaw (born 12 June 1987), known professionally as Abbey Lee, is an Australian fashion model, actress and musician. Following several years of success leading up to the 2011 fashion seasons, V magazine dubbed Kershaw a supermodel. Models.com has listed her as an "Industry Icon".

Kershaw was born in Melbourne. She is the daughter of Kerry, a psychologist, and Kim Kershaw, who played in the Victorian Football League for Richmond and Hawthorn. She has said that as a child, she was "always in the hospital." At age four, she suffered from meningitis and had to have two spinal taps. She also had a tumour on the knee, and several broken bones from climbing trees. She grew up in Kensington and attended St Michael's Catholic Primary school in North Melbourne. She has stated that she "grew up with 42 nationalities", explaining that her primary school of 150 children was very multicultural. She then attended the Academy of Mary Immaculate in Fitzroy. She later went on to win the Australian 2004 Girlfriend Model Search. After high school, in 2005, she moved from Melbourne to Sydney to begin modelling. She lived 100 metres from the beach and it was while at the beach where she was scouted by Chic Management's Kathy Ward, the model scout that also discovered Miranda Kerr and Samantha Harris. She signed with Chic Management within weeks.

In 2007, Kershaw signed with Next Management and by March had moved to New York City. On 11 December, Models.com named her the "Next Superstar".

Kershaw made her debut in the 2008 New York Fashion Week, managing to walk a total of 29 shows for designers such as Oscar de la Renta, Halston, and notably closing for Rodarte. For her first time in Milan Fashion Week, she was booked as a Gucci exclusive. Later that year, in September, she fell in her high heels at the Rodarte show in New York. Then, a month later in Paris, she fainted at the Alexander McQueen show from wearing a very tight leather corset. Regardless of these two incidents, it did not affect her from booking more runways shows. Kershaw was one of new faces to appear on one of the fourteen covers of V magazine's Autumn issue. On 15 November 2008, in Miami, she made her international TV appearance at the Victoria's Secret Fashion Show, modelling in the Pink Planet segment.

Kershaw has starred in the fragrance ads for Gucci's new "Flora" scent since 2008.

In November 2009, Fashion TV placed her first in their First Face Countdown for Spring/Summer 2010. Kershaw had to sit out the Autumn 2009 shows due to a knee injury: she had torn ligaments and could barely walk. Kershaw was featured in the explicit shoot for the French magazine Purple Fashion published Autumn/winter 2009. The infamous spread, shot by photographer Terry Richardson, caused outrage in the blogosphere, where Richardson was accused of cajoling the girls for his own sexual satisfaction. In his defense, Kershaw said, "Terry doesn't force girls to do anything they don't want to. He puts you in a G-string in a pile of mud because you want to do it. You touch yourself because you want to. For me, that shoot was the truth about how things were between us both, and I felt good doing it. I'm not ashamed of it—why should I be?" After skipping the Autumn 2009 season owing to a knee injury, Kershaw reappeared in Milan Fashion Week, opening D&G to having the first and last looks at Fendi and Versace, prompting New York Magazine to name her "Milan's Top Model". On 1 December 2009, for the second time, she participated in the Victoria's Secret Fashion Show, but this time she had three outfits, modelling in the "Star Trooper," "Pink Planet", and in the "Enchanted Forest" segment.

In 2010, Kershaw was heavily in demand for campaigns, shoots and shows. Kershaw was featured in the 2010 Pirelli Calendar photographed by Terry Richardson, and the 2011 edition photographed by Karl Lagerfeld. In March 2010, it was announced that she will be the face of Chanel's Autumn/Winter 2010/2011 ready-to-wear ad campaign. This news came after she closed the Chanel Spring 2010 couture show, and opened the Chanel Autumn/Winter 2010/2011 ready-to-wear show. In November, for the fourth time, she became the cover model of Australian Vogue (her previous covers of the same publication were in March 2010, March 2009, and September 2008). The same year, Kershaw was also featured as the face of the Anna Sui FW 2010 campaign.

She took her own self-portrait for the new Rag & Bone Do-It-Yourself ad campaign spring 2011 along with models Sasha Pivovarova, Edita Vilkeviciute, Karolina Kurkova, Candice Swanepoel and Lily Aldridge. She earned $100,000 as an exclusive for Chanel, walking for their spring-summer collection in Paris. She skipped New York Fashion Week for London. V Magazine's "The Discovery Issue" crowned Abbey Lee Kershaw as the new Supermodel. The magazine called Kershaw "the biggest fashion export from Down Under since Elle Macpherson joined the ranks of Cindy Crawford, Claudia Schiffer, Kate Moss, Naomi Campbell and Christy Turlington."

Kershaw has been on the May 2011 cover of Numero, photographed by Tom Munro.

Kershaw has been absent from the runway since the Fall 2012 shows where she walked only for Alexander Wang and Anna Sui. During 2012, she focused on acting and spent much of the year in Africa filming the post-apocalyptic film Mad Max: Fury Road (2015).

Although Kershaw was ranked 4th at the height of her career on the Top 50 Models Women list by models.com, she currently ranks 12th on the list, as of June 2013. and is ranked 21st on the "Top Money Girls" list by models.com.

Kershaw appeared in the Fall/Winter 2013–14 Campaign for Gucci alongside male model Adrien Sahores, shot by Mert Alas and Marcus Piggott.

In May 2014, Kershaw once again appeared on the cover of Vogue Australia and starred in two editorials on the same issue, in which was celebrate her debut into acting career. In August 2014 Models.com moved Abbey to the Industry Icon list considering her still going presence in fashion with big fragrances contracts as Flora By Gucci and Versace's Yellow Diamond, although she was absent from runways and editorials to film Mad Max and Gods of Egypt.

Kershaw co-starred in the 2015 film Mad Max: Fury Road, alongside Tom Hardy. In 2016, she had major roles the films Gods of Egypt, alongside Gerard Butler, and, as Sarah, in the Nicolas Winding Refn-directed thriller The Neon Demon, with Elle Fanning. In 2017, Lee played Tirana in the film The Dark Tower.

She has a pet lizard named Annie Hall. Kershaw is also an artist who does abstract painting and uses oil pastels.