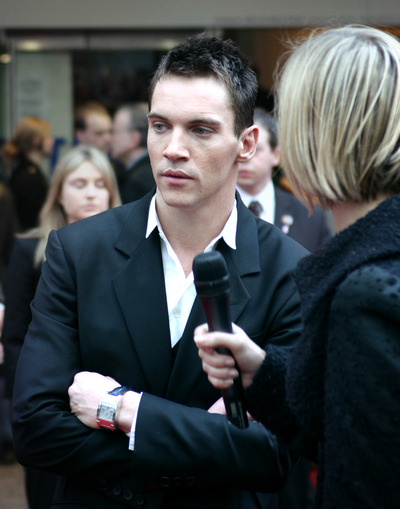 He is best known for his roles in the films Velvet Goldmine, Mission Impossible III, Bend It Like Beckham, Match Point and his television roles as Elvis Presley in the biographical miniseries Elvis, which earned him a Golden Globe for Best Actor, and as King Henry VIII in the historical drama The Tudors.  He has been the face of several advertising campaigns for Hugo Boss fragrances. He recently has been cast as Valentine Morgenstern in the upcoming film The Mortal Instruments: City of Bones.

He was born in Dublin, Ireland, the son of Mary Geraldine "Geri" Meyers and musician John O'Keeffe. He was raised Roman Catholic by his family. Born in Drimnagh, he moved to Cork, at one year old and was raised there with his three younger brothers, Jamie, Alan, and Paul, who are all professional musicians. When he was three, his parents separated. His mother raised Rhys Meyers and his brother Alan while his other two brothers went to live at their grandmother's house with their father. Rhys Meyers attended North Monastery School.

Rhys Meyers was expelled from the North Monastery Secondary School at age 16 for truancy and spent much of his time hanging out in pool halls. Casting agents looking for Irish boys to appear in War of the Buttons spotted Rhys Meyers at a Cork pool hall, the Victoria Sporting Club, and invited him to audition. Although he was passed over for War of the Buttons, the casting agents encouraged him to pursue a career in acting. His first film role came soon afterward, in A Man of No Importance (1994). In 1996, he appeared in Michael Collins, as the title character's assassin. In 1999, he appeared in Ride with the Devil as psychopathic guerrilla fighter Pitt Mackeson.