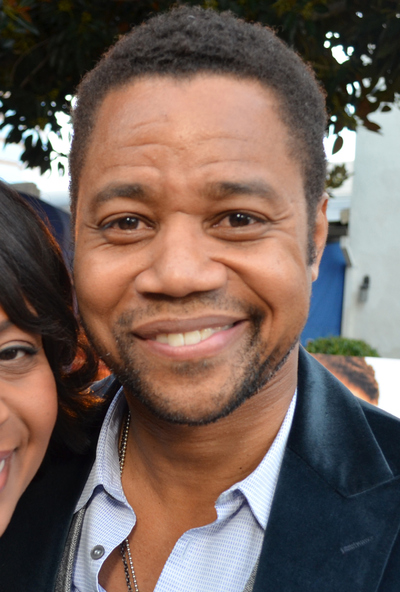 Gooding, Jr. was born in Bronx, New York, the son of Shirley Gooding (née Sullivan), a singer with the Sweethearts, and Cuba Gooding, Sr., a lead vocalist of the soul group The Main Ingredient. He has three siblings: Tommy, Omar, and April. His paternal grandfather was a native of Barbados. His family moved to Los Angeles after his father's music group had a hit single with "Everybody Plays the Fool" in 1972; the elder Gooding abandoned his family two years later. During his appearance on The Howard Stern Show, Gooding revealed that, after his father had left, his family lived in hotels throughout Los Angeles. Gooding was raised by his mother and attended four different high schools: North Hollywood High School, Tustin High School, Apple Valley High School, and John F. Kennedy High School in Granada Hills in Los Angeles. He served as class president in three of them. He became a born-again Christian at age 13.

His first job as an entertainer was as a breakdancer performing with singer Lionel Richie at the closing ceremonies of the 1984 Summer Olympics in Los Angeles. After high school, Gooding studied Japanese martial arts for three years, before turning his focus toward acting. Early on, he landed guest starring roles on shows like Hill Street Blues (1981), Amen (1988) and MacGyver (1988, 1989 and 1990) and also had a tiny part in the popular comedy Coming to America (1988). Gooding's first major role was in John Singleton's inner-city crime drama Boyz n the Hood (1991), in which he played the lead, Tré Styles. A box office surprise and critical hit, the film is now considered a modern classic. He followed this success with supporting roles in major films such as A Few Good Men (1992), Lightning Jack (1994), and Outbreak (1995). In 1996, Gooding reached a new level of prominence when he was cast as an arrogant yet charismatic football player on the brink of a career-ending injury in Cameron Crowe's blockbuster dramatic sports comedy Jerry Maguire (1996) with co-star Tom Cruise, and was a major critical and commercial success and was nominated for the Academy Award for Best Picture. Most significantly, it earned Gooding an Oscar for Best Supporting Actor. His exuberant "Show Me the Money" line in the film became a nationwide catch phrase. Additionally, his Oscar acceptance speech has often been cited for its enthusiasm.

In 1994, Gooding Jr. married his high school sweetheart Sara Kapfer, and they have three children: Spencer, Mason and Piper. They live in Pacific Palisades, and Porter Ranch, California.