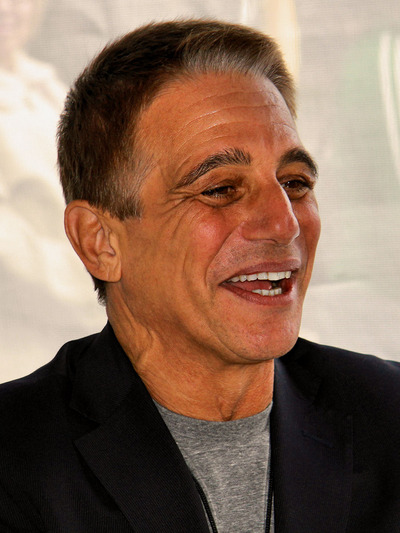 Tony Danza (born Antonio Salvatore Iadanza on April 21, 1951) is an American actor known for starring on the TV series Taxi and Who's the Boss?, for which he was nominated for an Emmy Award and four Golden Globe Awards. In 1998, Danza won the People's Choice Award for Favorite Male Performer in a New Television Series for his work on the 1997 sitcom The Tony Danza Show.

Danza was born in Brooklyn, New York, to parents Anne Cammisa Iadanza (1925–1993) and Matty Iadanza (1920–1983), both of whom died from cancer. Matty Iadanza worked as a garbage man in Brooklyn. Danza's father was of Italian ancestry and Danza's mother was an immigrant from Sicily in Italy. He has a younger brother, Matty Jr. (born 1954), a Los Angeles restaurant owner. When Danza was 14, he and his family relocated to Malverne, New York on Long Island. Danza attended Malverne High School, graduating in 1968. In the first episode of his show "Teach: Tony Danza", Danza describes himself as a "bad student" in high school. Danza earned a bachelor's degree in history in 1972 from the University of Dubuque, which he attended on a wrestling scholarship.

In 1975, as a joke, Danza's friends entered him in the New York City Golden Gloves (Source: bio.The Biography Channel Presents Tony Danza 2004). After knocking out his first 6 opponents, Danza was knocked out in the finals.

During his first year of college, he got the Robert Crumb Keep on Truckin' tattoo on his upper right arm. In a 1985 interview in Us Weekly magazine, Danza remarked, "I was playing pool with a guy who had all these tattoos, and I wanted to be friends." Danza sports a "Keep Punching" boxing gloves tattoo on his right shoulder. In college, Danza met and married his first wife.

Danza was a professional boxer with a 9-3 record, with all of his fights, wins and losses, ending by knockout.

Shortly after his college graduation, Danza was discovered by a producer at a boxing gymnasium in New York. He then earned a spot on the television show Taxi.

Danza is better known for his characters named 'Tony' in Taxi (1978–1983), in which he played cab driver and part-time boxer, "Tony Banta". On Who's the Boss? (1984–1992), Danza portrayed a retired baseball player working as a housekeeper and single father, "Tony Micelli."

Danza also starred in the short-lived sitcoms Hudson Street (1995) and The Tony Danza Show (1997), not to be confused with his talk show of the same name. He had a role in the TV drama Family Law from 2000 until 2002. He took his first role, a nonspeaking part as a poker player in National Lampoon's Animal House.

In college, Danza met and married his first wife.

Tony Danza was also ordained by the Universal Life Church, and has been an ordained minister for many years.