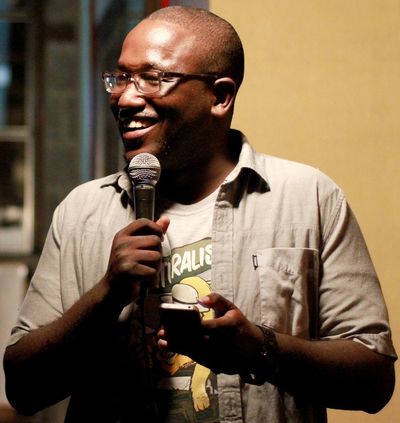 Hannibal Buress (born February 4, 1983) is an American stand-up comedian, actor, writer and producer. Born and raised in the Austin neighborhood of Chicago, Illinois, Buress embarked on a comedy career in late 2009, gaining notable recognition after being featured in Comedy Central's The Awkward Comedy Show, alongside various other comedians. This enabled Buress to release his first comedy album, My Name is Hannibal, in 2010.

After leaving Saturday Night Live as a writer due to having a single sketch aired in a calendar year, Buress began writing for 30 Rock, receiving critical acclaim as a part of the writing team which culminated in an Emmy Award win. Despite only writing a single season for the show, Buress worked to release his second album, Animal Furnace, which eventually aired on Comedy Central in 2012. Following the critical and commercial success of Animal Furnace, Buress went on to feature in several specials for Comedy Central, as well as starring in Neighbors, The Secret Life of Pets, and Baywatch. Buress currently stars as Lincoln Rice in Broad City, as well as being a regular on the The Eric Andre Show.

Buress is a native of Chicago, Illinois, who was raised in its Austin neighborhood, the son of Margaret, a teacher, and John Burress, who worked for Union Pacific Railroad. He was named after the Carthaginian military commander Hannibal Barca. After attending Steinmetz College Prep, he briefly attended Southern Illinois University Carbondale, where he became a friend of hip hop artist Open Mike Eagle, his resident adviser at the time.

Buress has been featured in The Awkward Comedy Show special on Comedy Central, and alongside comics Baron Vaughn, Eric André, Marina Franklin, and Victor Varnado, and on the FX sitcom Louie. He currently co-stars with Eric André on The Eric André Show on Adult Swim. In July 2010, Buress made Variety magazine's "Ten Comics to Watch in 2010" list.

His first stand-up comedy album My Name is Hannibal was released on July 27, 2010.

Buress was a writer on Saturday Night Live from 2009 to 2010. He left having had only one of his sketches aired. In September 2010, he began writing for the fifth season of the NBC comedy series 30 Rock. He quit after six months.

He released his second album, "Animal Furnace," in 2012, which also aired as a special on Comedy Central. The album and special received positive reviews.

He used to host a weekly stand-up comedy show at The Knitting Factory in Brooklyn, New York, on Sunday evenings.

He lives in New York City. He said in an interview with Comedy Central that he is a Democrat.