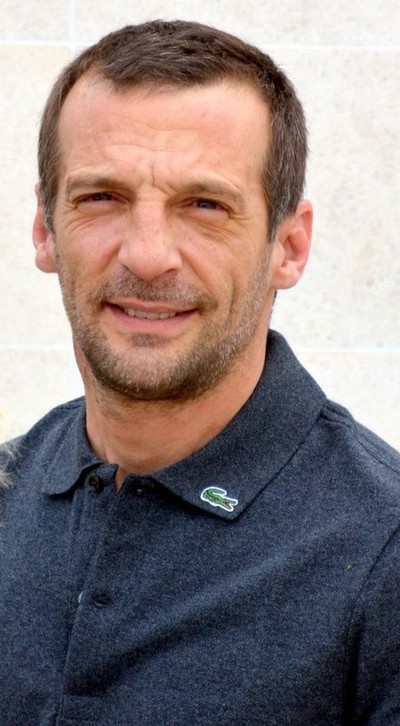 He has won three César Awards: Most Promising Actor for See How They Fall (1994), and Best Film and Best Editing for La Haine (1995). He also received Best Director and Best Writing nominations.

Kassovitz was born in Paris, the son of Chantal Rémy, a film editor, and Peter Kassovitz, a director and writer. His mother is a French Roman Catholic, and his father is a Hungarian Jew who left during the Hungarian Revolution of 1956. (Mathieu Kassovitz has described himself as "not Jewish but I was brought up in a world of Jewish humor").

As a filmmaker, Kassovitz has made several artistic and commercial successes. He wrote and directed La Haine (Hate, 1995), a film dealing with themes around class, race, violence, and police brutality The film won the César Award for Best Film and netted Kassovitz the Best Director prize at the 1995 Cannes Film Festival. When he was compared to Spike Lee because the film was being compared to Lee's Do the Right Thing, he noted the irony:

“I don't know if it's really important, or intelligent even, when people say to me I'm a white Spike Lee, because they said to Spike Lee you're a black Woody Allen.”

He later directed Les Rivières Pourpres (2000), a police detective thriller starring Jean Reno and Vincent Cassel, another massive commercial success in France, and Gothika (2003), a fantasy thriller (considered by some to be a commercial failure, although it grossed over three times its roughly $40 million budget), with Halle Berry and Penélope Cruz. He used the money he made from Gothika to develop a far more personal project Babylon Babies, the adaptation of one of Maurice Dantec's books. Kassovitz established the film production firm MNP Entreprise in 2000 "to develop and produce feature films by Kassovitz and to represent him as a director and actor." MNP Entreprise is responsible for the co-productions of a number of films including Avida (2006) in which Kassovitz acts and Babylon A.D. which he directed. Kassovitz purchased the film rights for the novel Johnny Mad Dog by Congolese writer Emmanuel Dongala. The film was also co-produced by MNP Entreprise, and directed by Jean-Stéphane Sauvaire. The premiere of the film was made at the 2008 Cannes Film Festival where it was screened within the Un Certain Regard section.

In 2011, he starred in and directed Rebellion, a war film based on a true story of French commandos who clashed with tribes in New Caledonia, the Melanesian territory of France. His future project science fiction film MNP is named after Mir Space Station, whose writing in Cyrillic letters (Мир) look like the letters MNP, and also the production company.

Kassovitz is most famous outside France for his acting role as Nino Quincampoix in Jean-Pierre Jeunet's film Amélie. Among many other credits, he also had small roles in La Haine (which he also directed), Birthday Girl, and The Fifth Element. He played leading roles in A Self Made Hero (1996) by Jacques Audiard and in Amen. (2003) by Costa-Gavras. Kassovitz is also recognizable for playing a conflicted Belgian explosives expert in Steven Spielberg's controversial 2005 film Munich, alongside Eric Bana and Geoffrey Rush. Kassovitz was a jury member for the 2001 Cannes Film Festival.

Since 2015 Kassovitz has been starring in the acclaimed espionage thriller series The Bureau, broadcast in France on Canal+ and made available around the world on Amazon TV. So far three seasons have been screened.

Kassovitz was married to French actress Julie Mauduech, whom he directed and acted alongside in his 1993 film Métisse (Café au lait, English title) and who made a brief appearance in La Haine (during the scene in the Parisian art gallery). They have one daughter. Kassovitz also has two children with his former partner, actress Aurore Lagache.

In November 2005, riots spread throughout suburbs of Paris following the deaths of two teenagers of black and North African descent, who were electrocuted while avoiding police ID checks and questioning. The question of whether young men were victims of racial discrimination set off a chain reaction of violence in schools, gyms, and police stations, and an aggressive response from then-Home Office Minister Nicolas Sarkozy. Sarkozy stirred controversy and outrage when he said the rioters were "rabble" and should be "cleansed" from the banlieues (suburbs) with a "fire hose".

Kassovitz, whose film La Haine a decade earlier had highlighted such tensions, publicly responded to Sarkozy via his blog, saying Sarkozy held "ideas that not only reveal his inexperience of politics and human relations, but which also illuminate the purely demagogical and egocentric aspects of a puny, would-be Napoleon." In a 2012 interview, he labeled the outgoing Sarkozy administration as "horrible".