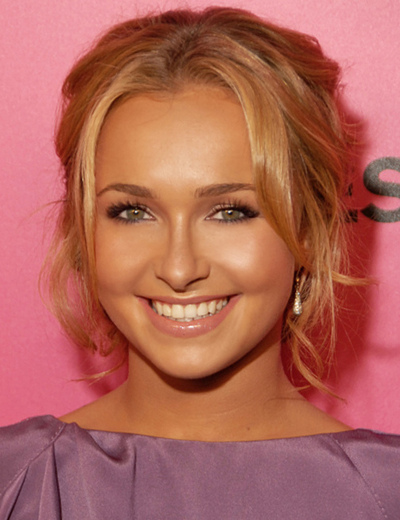 Hayden Leslie Panettiere (born August 21, 1989) is an American actress, model, singer, voice artist, and activist. She is known for her roles as cheerleader Claire Bennet on the NBC series Heroes (2006–2010) and Juliette Barnes in the ABC musical drama series Nashville (since 2012).

A native of New York, she first appeared in a commercial at the age of 11 months. She began her acting career by playing Sarah Roberts on One Life to Live (1994–97), and Lizzie Spaulding on Guiding Light (1996–2000), before starring at age 10 as Sheryl Yoast in the Disney feature film Remember the Titans. Other notable roles include her portrayal of the title character in the true crime drama Amanda Knox: Murder on Trial in Italy and Kirby Reed in the slasher film Scream 4. She received two nominations for the Golden Globe Award for Best Supporting Actress – Series, Miniseries or Television Film, for her work on Nashville in 2012 and 2013.

Panettiere was born in and partly raised in Palisades, New York, the daughter of Lesley R. Vogel, a former soap opera actress, and Alan Lee "Skip" Panettiere, a fire department captain. She has one younger brother, fellow actor Jansen Panettiere. Panettiere has Italian and German ancestry. Her surname means "baker" in Italian and her mother's maiden name means "bird" in German. Her mother's family is from Indiana.

Although Panettiere attended South Orangetown Middle School in New York, she was home schooled from grade nine to the completion of high school.

Panettiere first appeared in commercials at 11 months, beginning with an advertisement for Playskool. She landed a role as Sarah Roberts on the ABC soap opera One Life to Live from 1994 to 1997, which was followed by Lizzie Spaulding on the CBS soap opera Guiding Light in 1996, and again from 1997 to 2000. While on Guiding Light, Panettiere's character Lizzie battled leukemia. For drawing the attention of daytime viewers to the disease, and for improving national awareness, the Leukaemia & Lymphoma Society gave her its Special Recognition Award.

Panettiere became most prominent as Claire Bennet in the NBC series Heroes, which was created by Tim Kring, as a high school cheerleader with regenerative healing powers. Thanks to her role on Heroes, she became a regular on the science fiction convention circuit, invited to attend conventions around the world in 2007, including Gen Con, New York Comic Con, and Fan Expo Canada. Panettiere has complained that her acting options are sometimes limited because "people look at [her] as either the 'popular cheerleader' type or just 'the blonde.'"

Panettiere made her feature film debut with 1998's A Bug's Life, but her first film to actually be released was the same year's The Object of My Affection, in which she appears briefly as a mermaid in the school play in the opening scene. In 1999, she portrayed the girl on a sinking sailboat in Message In A Bottle. She played the role of Coach Yoast's daughter, Sheryl, in the 2000 Disney film Remember the Titans. In 2004, she had her first starring role in the Disney Channel film Tiger Cruise and played Kate Hudson's adolescent niece in Raising Helen. In 2005, she was the title character's rival in a skating contest in Ice Princess. In the same year she played the main (human) role in the film Racing Stripes as budding jockey Channing Walsh. She subsequently starred in 2006's Bring It On: All or Nothing as a cheerleader and had a supporting role as Adelaide Bourbon in the 2007 independent film Shanghai Kiss.

In June 2007, she signed with the William Morris Agency, after previously being represented by the United Talent Agency. Forbes estimated that she earned $2 million in 2007.

Panettiere dated her Heroes co-star Milo Ventimiglia from December 2007 to February 2009. Panettiere met heavyweight boxing world champion Wladimir Klitschko in 2009 at a mutual acquaintance's party, and they soon began dating. Panettiere was ringside for Klitschko's knockout victory over Samuel Peter on September 11, 2010. In May 2011, Panettiere announced that she and Klitschko had broken up amicably after two years together. Both cited the long-distance nature of their relationship as the reason, and said they would remain close friends. Panettiere subsequently dated NFL player Scotty McKnight from June 2011 to December 2012. Panettiere confirmed reports that she and Klitschko had resumed their romantic relationship in an April 2013 interview. In October 2013, she announced her engagement to Klitschko, which had been rumored since the summer. On December 9, 2014, Panettiere gave birth to their daughter, Kaya Evdokia Klitschko.

She followed a vegetarian diet while she starred in Heroes but has since added chicken and fish to her diet, stating that she "didn't respond well" to a vegetarian diet, and she had "low energy".