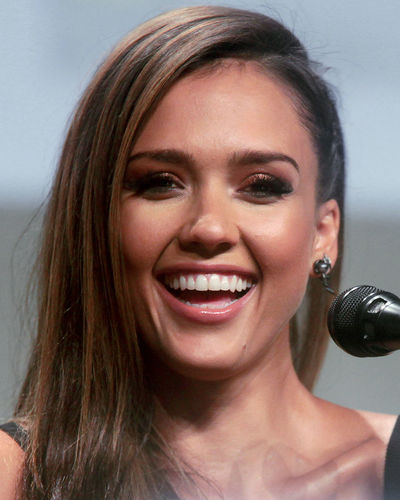 Jessica Marie Alba (born April 28, 1981) is an American actress, model and businesswoman. She has won various awards for her acting, including the Choice Actress Teen Choice Award and Saturn Award for Best Actress on Television, and a Golden Globe nomination for her lead role in the television series Dark Angel.

In January 2012, Alba co-founded The Honest Company, a consumer goods company that sells non-toxic household products, and owns 15 to 20 percent of the company.

Alba was born in Pomona, California, to Catherine Louisa (née Jensen) and Mark David Alba. Her mother has Danish, Welsh, German, English, and French ancestry, while her paternal grandparents, who were born in California, were both the children of Mexican immigrants. She has a younger brother, Joshua. Her third cousin, once removed, is writer Gustavo Arellano. Her father's Air Force career took the family to Biloxi, Mississippi, and Del Rio, Texas, before settling back in Claremont, California, when she was nine years old. Alba has described her family as being a "very conservative family – a traditional, Catholic, Latin American family" and herself as very liberal; she says she had identified herself as a "feminist" as early as age five.

Alba's early life was marked by a multitude of physical maladies. During childhood, she suffered from partially collapsed lungs twice, had pneumonia four to five times a year, as well as a ruptured appendix and a tonsillar cyst. Alba became isolated from other children at school, because she was in the hospital so often due to her illnesses that no one knew her well enough to befriend her. Alba has also had asthma since she was a child. Alba has said that her family's frequent moving also contributed to her isolation from her peers. She has acknowledged that she suffered from obsessive–compulsive disorder during her childhood. Alba graduated from Claremont High School at age 16, and she subsequently attended the Atlantic Theater Company.

Alba expressed interest in acting from the age of five. In 1992, the 11-year-old Alba persuaded her mother to take her to an acting competition in Beverly Hills, whose grand prize was free acting classes. Alba won the grand prize, and took her first acting lessons. An agent signed Alba nine months later. Her first appearance on film was a small role in the 1994 feature Camp Nowhere as Gail. She was originally hired for two weeks but her role turned into a two-month job when one of the prominent actresses dropped out.

Alba appeared in two national television commercials for Nintendo and J. C. Penney as a child. She was later featured in several independent films. She branched out into television in 1994 with a recurring role as the vain Jessica in three episodes of the Nickelodeon comedy series The Secret World of Alex Mack. She then performed the role of Maya in the first two seasons of the television series Flipper. Under the tutelage of her lifeguard mother, Alba learned to swim before she could walk, and she was a PADI-certified scuba diver, skills which were put to use on the show, which was filmed in Australia.

In 1998, she appeared as Melissa Hauer in a first-season episode of the Steven Bochco crime-drama Brooklyn South, as Leanne in two episodes of Beverly Hills, 90210, and as Layla in an episode of The Love Boat: The Next Wave. In 1999, she appeared in the Randy Quaid comedy feature P.U.N.K.S.. After Alba graduated from high school, she studied acting with William H. Macy and his wife, Felicity Huffman, at the Atlantic Theater Company, which was developed by Macy and Pulitzer Prize-winning playwright and film director, David Mamet. Alba rose to greater prominence in Hollywood in 1999 after appearing as a member of a snobby high school clique in the Drew Barrymore romantic comedy Never Been Kissed, and as the female lead in the 1999 comedy-horror film Idle Hands, opposite Devon Sawa.[

Her big break came when writer/director James Cameron picked Alba from a pool of 1,200 candidates for the role of the genetically engineered super-soldier, Max Guevara, on the Fox sci-fi television series Dark Angel. Co-created by Cameron, the series starred Alba, and ran for two seasons until 2002, earning her critical acclaim as well as a Golden Globe nomination. Alba later admitted to suffering from anorexia while in preparation for Dark Angel.

Alba has been well received in popular culture. She received the Teen Choice Award for "Choice Actress" and Saturn Award for Best Actress for her role in Dark Angel. In 2006, Alba received an MTV Movie Award for "Sexiest Performance" for Sin City. Her acting has also drawn criticism, however, as she was nominated for the Razzie Award for Worst Actress in 2005 for her performances in Fantastic Four and Into the Blue. She was nominated for the same award for 2007's Awake, Good Luck Chuck, and Fantastic Four: Rise of the Silver Surfer.

Alba's film roles have included an aspiring dancer-choreographer in Honey, exotic dancer Nancy Callahan in Sin City, and as the Marvel Comics character Sue Storm, the Invisible Woman, in Fantastic Four and its sequel. She also starred in Into the Blue (2005) and Good Luck Chuck (2007). Alba hosted the 2006 MTV Movie Awards and performed sketches spoofing the movies King Kong, Mission: Impossible 3, and The Da Vinci Code. In February 2008, she hosted the Academy of Motion Picture Arts and Sciences' Science and Technical Awards. Alba has been represented by talent agents Patrick Whitesell and Brad Cafarelli.

In 2008, Alba made her acting transition to the horror-film genre in The Eye, a remake of the Hong Kong original. The film was released on February 1, 2008. Though the film was not well received by critics, Alba's performance itself received mixed reviews. Alba won a Teen Choice for Choice Movie Actress: Horror/Thriller and a Razzie Award for Worst Actress-nomination. Also in 2008, Alba starred alongside Mike Myers and Justin Timberlake in "box office bomb" The Love Guru. Alba was nominated for a Razzie Award for Worst Actress.

In late 2008, Alba signed on to star as the lead role in An Invisible Sign of My Own. The movie finished filming in November 2008. It premiered at the Hamptons International Film Festival and was released to theaters in May 2011.

On the cover of the March 2006 issue, Playboy magazine named Alba among its 25 Sexiest Celebrities, and the Sex Star of the Year. Alba was involved in litigation against Playboy for its use of her image (from a promotional shot for Into the Blue) without her consent, which she contends gave the appearance that she was featured in the issue in a "nude pictorial". However, she later dropped the lawsuit after receiving a personal apology from Playboy owner Hugh Hefner, who agreed to make donations to two charities that Alba has supported.

Alba was raised as a Catholic throughout her teenage years, but left the church after four years because she felt she was being judged for her appearance, explaining:

"Older men would hit on me, and my youth pastor said it was because I was wearing provocative clothing, when I wasn't. It just made me feel like if I was in any way desirable to the opposite sex that it was my fault, and it made me ashamed of my body and being a woman".

Alba also had objections to the church's condemnations of premarital sex and homosexuality, and what she saw as a lack of strong female role models in the Bible, explaining "I thought it was a nice guide, but it certainly wasn't how I was going to live my life." Her "religious devotion [began] to wane" at the age of 15 when she guest-starred as a teenager with gonorrhea in the throat in a 1996 episode of the television series Chicago Hope. Her friends at church reacted negatively to her role, making her lose faith in the church. However, she has stated that she still holds her belief in God despite leaving the church.

While filming Dark Angel in January 2000, Alba began a three-year relationship with her co-star Michael Weatherly, which caused controversy due to their 12-year age difference.[citation needed] Weatherly proposed to Alba on her twentieth birthday, which she accepted. In August 2003, Alba and Weatherly announced that they had ended their relationship. In July 2007, Alba spoke out about the breakup, saying "I don't know [why I got engaged]. I was a virgin. He was 12 years older than me. I thought he knew better. My parents weren't happy. They're really religious. They believe God wouldn't allow the Bible to be written if it wasn't what they are supposed to believe. I'm completely different." Alba had at one time said she envisioned a much older man as her ideal partner, making references to Morgan Freeman, Sean Connery, Robert Redford, and Michael Caine. She said, "I have this thing for older men. They've been around and know so much." 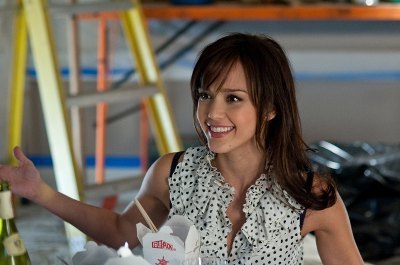 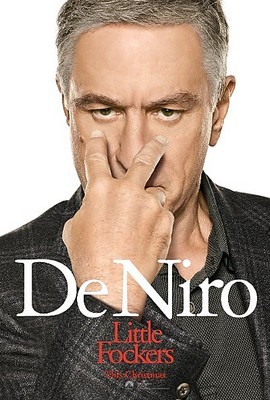