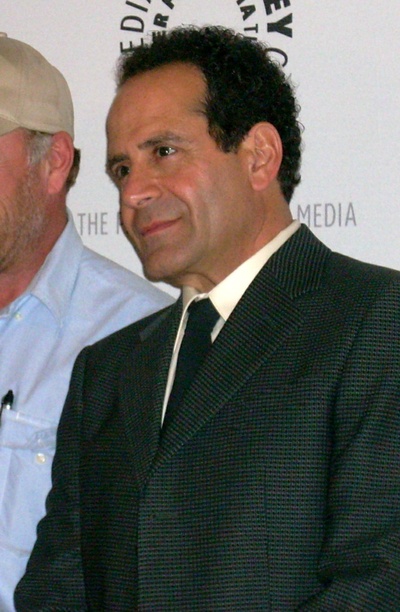 Anthony Marcus Shalhoub (shə-loob; born October 9, 1953) is an American actor. His television work includes the roles of Antonio Scarpacci in Wings and detective Adrian Monk in the TV series Monk, for which he has won a Golden Globe Award for Best Actor – Television Series Musical or Comedy, two Screen Actors Guild Awards for Outstanding Performance by a Male Actor in a Comedy Series and three Primetime Emmy Awards for Outstanding Lead Actor in a Comedy Series.

Shalhoub is the ninth of ten children, and was born and raised in Green Bay, Wisconsin. His father, Joe, was from Lebanon and immigrated to the United States as an orphan at the age of ten. Joe married Shalhoub’s mother, Helen (née Seroogy), a second-generation Lebanese-American, and founded a family grocery chain, starting with a store in downtown Green Bay.

Shalhoub was introduced to acting by an older sister who put his name forward to be an extra in a high school production of The King and I. Despite finding himself standing on the wrong side of the curtain during the final dress rehearsal, he became enamored of the theater. Shalhoub attended Green Bay East High School. In his senior year he suffered a setback, breaking his leg in a fall off the stage into the pit during a rehearsal. Recovering quickly, he was able to perform in the school's final play of the year. After a short time at the University of Wisconsin–Green Bay, he earned a bachelor's degree in drama from the University of Southern Maine. He later went on to earn a master's from the Yale School of Drama in 1980.

Shortly thereafter, he moved to Cambridge, Massachusetts, where he spent four seasons with the American Repertory Theater before heading to New York City, where he found work waiting tables while honing his craft and auditioning. He made his Broadway debut in the 1985 Rita Moreno/Sally Struthers production of The Odd Couple and was nominated for a 1992 Tony Award for his featured role in Conversations with My Father. Shalhoub met his wife, actress Brooke Adams, when they co-starred on Broadway in The Heidi Chronicles.

One of Shalhoub's first television roles was in 1991 as the Italian cabdriver Antonio Scarpacci in the sitcom Wings. Shalhoub was pleasantly surprised to land the role after having a guest appearance in the second season. Shalhoub affected an Italian accent for the role. In the same time period, Shalhoub played physicist Dr. Chester Ray Banton in The X-Files second-season episode "Soft Light".

Shalhoub's film roles following his Wings breakout included an excitable producer consulted by John Turturro's character in Barton Fink and a fast-talking lawyer in The Man Who Wasn't There (both directed by the Coen brothers), a linguistically unidentified cabby in Quick Change, a Cuban-American businessman in Primary Colors, sleazy alien pawn shop owner Jack Jeebs in the Men in Black films, a sympathetic attorney working for John Travolta's lawyer in A Civil Action, a widowed father in Thir13en Ghosts, a cameo role in the film Gattaca, and a has-been television star in Galaxy Quest.

He had a co-starring role in the film Big Night, where he plays an Italian-speaking chef complete with accent. In 1995 he had a role in the hit NBC sitcom Frasier in the episode "The Focus Group" as an Arab newsstand owner named Manu Habbib. He did voice acting for the 1997 computer game Fallout.

Shalhoub demonstrated his dramatic range in the 1998 big-budget thriller The Siege, where he co-starred alongside Denzel Washington, Annette Bening, and Bruce Willis. His character, FBI Special Agent Frank Haddad, was of Middle Eastern descent and suffered discrimination after terrorist attacks in New York City. He returned to series television in 1999, this time in a lead role on Stark Raving Mad, opposite Neil Patrick Harris. The show failed to attract an audience and NBC cancelled the series in 2000.

After a two-year absence from the small screen, Shalhoub starred in another TV series, Monk. Airing on the USA Network, the series featured Shalhoub as Adrian Monk, a brilliant detective with obsessive-compulsive disorder. Shalhoub was nominated for an Emmy Award for Outstanding Lead Actor in a Comedy Series in eight consecutive years from 2003 to 2010, winning in 2003, 2005, and 2006. He also took the Golden Globe award for Best Performance by an Actor in a Television Series – Musical or Comedy, in 2003.

Shalhoub and Adams appeared on Broadway together in the 2010 revival of Lend Me a Tenor. At the time of their wedding, Adams had an adopted daughter, Josie Lynn (born 1989), whom Shalhoub adopted. In 1994, they adopted another daughter, Sophie (born 1993).

Tony's brother Michael is also an actor who made multiple guest appearances on Monk. He first appears in "Mr. Monk and the Missing Granny", as a member of a disbanded radical group suspected of involvement in a kidnapping. In "Mr. Monk Bumps His Head", he plays a Wyoming beekeeper who is annoyed when a suspect crashes a car into his farm. Michael also appears in "Mr. Monk Is the Best Man" as the minister presiding at Leland Stottlemeyer's wedding.