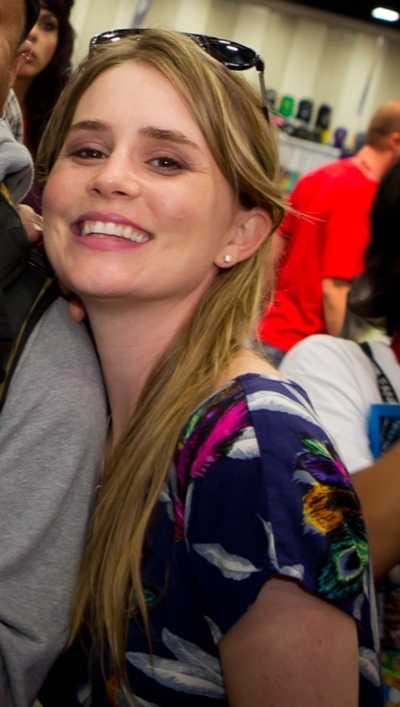 Lohman was born and raised in Palm Springs, California, the daughter of Diane (née Dunham), a patisserie owner, and Gary Lohman, a Minnesota-born architect. She has one younger brother, Robert (born 1982). She has two cats, Monk and Clint. In high school she had straight A's in all her school subjects, except in drama, because she was too shy. At age nine, she played Gretl in The Sound of Music at the Palm Desert's McCallum Theater. Two years later, she won the Desert Theater League's award for "Most Outstanding Actress in a Musical" for the title role in Annie. By the age of 17, Lohman had appeared in 12 different major productions and had been a backing singer for the likes of Frank Sinatra, Bob Hope and the Desert Symphony.

As a senior, Lohman was an awardee of the National Foundation for Advancement in the Arts and was offered the chance to attend the Tisch School of the Arts, but declined.

In 1997, after graduating from high school, Lohman moved to Los Angeles to pursue a screen acting career. For the next few years, her work consisted of science fiction B-movies (such as Kraa! The Sea Monster and Planet Patrol), television productions (including the television film Sharing the Secret) and children's films (such as Delivering Milo and The Million Dollar Kid). Also included was the dark urban drama White Boy.

Lohman starred in White Oleander, an adaptation of Janet Fitch’s novel, alongside Michelle Pfeiffer, Robin Wright Penn and Renée Zellweger and directed by Peter Kosminsky. Though the film was unsuccessful at the box office (it opened to $5.6 million in 1,510 theaters), it received generous reviews and her performance met with wide critical acclaim, being described as her "breakthrough role" by media sources.

The following year, Lohman appeared in Matchstick Men, directed by Ridley Scott, starring with Nicolas Cage and Sam Rockwell. And though it was not a box office success either, Lohman continued to receive critical praise. Later that year, she appeared in Tim Burton’s Big Fish, which continued her trend of appearing in acclaimed but commercially unsuccessful films.

In 2005, Lohman appeared in Atom Egoyan's Where the Truth Lies. The film originally received an NC-17 rating for its graphic sexual content, and failed at the box office afterwards. Some critics (such as Roger Ebert) felt that she was well-suited for the role. Her next feature, The Big White, featured her alongside actors Robin Williams, Holly Hunter and Tim Blake Nelson, but nevertheless went direct-to-video. In the same year, Lohman voiced the title character in the English language re-dubbing of Nausicaä of the Valley of the Wind.

Lohman's next film was the drama Flicka, which was released on October 20, 2006. At the age of 25, she played a 16-year-old girl who befriends a wild mustang in the film. Lohman had never ridden a horse prior to filming and trained rigorously for a month. She said that she was "constantly thrown emotionally and physically" while working with the horses for this role. Flicka went on to become a surprise hit in the DVD market. She then played a recovering heroin addict in Things We Lost in the Fire.

Lohman was then signed to replace Ellen Page in Sam Raimi's critically acclaimed horror film, Drag Me to Hell, which was released on May 29, 2009.

Lohman, who is frequently cast as a teenager, has said that she believes she "look[s] younger, but act[s] older" than her age.

In 2010, Lohman gave birth to the couple's first child, a boy, Billy Neveldine in Bucharest, Romania, where Neveldine's 2012 film Ghost Rider: Spirit of Vengeance was filming. News of the child's birth was not revealed until August 2011. She has since given birth to a second child.