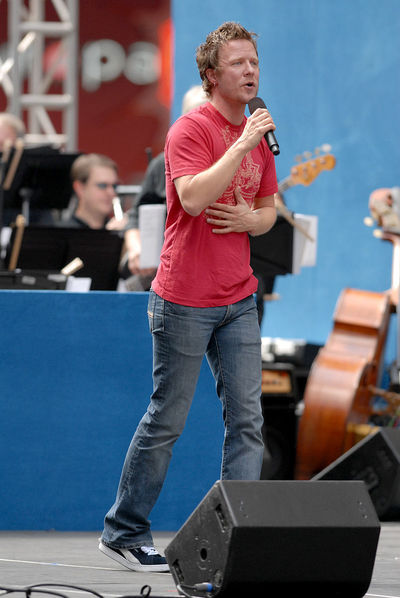 Will Chase (born September 12, 1970) is an American actor and singer, best known for his work in Broadway musicals and in his role as country superstar Luke Wheeler on ABC's Nashville.

Chase was born in Frankfort, Kentucky, and is the youngest of three boys. He graduated from Western Hills High School and the Oberlin Conservatory of Music, where he studied conducting with Robert Spano and majored in percussion.

Chase attended Oberlin Conservatory of Music, training as a percussionist and conductor.

Chase started his acting career in Chicago, performing in regional theater productions and received three Joseph Jefferson Award nominations. He then played Chris in the 2nd National Tour of Miss Saigon. He first performed on Broadway in 1998 as the Squeegee Man and Roger understudy in Rent in the role originated by Adam Pascal; he also starred as the last Roger in the final Broadway company of Rent, which was recorded for the theatrical release entitled Rent: Filmed Live on Broadway. His additional Broadway credits include Miss Saigon (with the original star Lea Salonga playing Kim to close the Broadway production); The Full Monty, as Jerry Lukowski replacement (2001); Lennon (2005); Aida (Radames replacement, 2003–04), another role originated by Pascal; and Tony in Billy Elliot the Musical. He was also in A Little Princess the Musical as Captain Crewe. In 2005, he played Neville Craven in the 2005 World AIDS Day The Secret Garden concert.

In 2006, he starred in High Fidelity on Broadway, and starred as Valentin in Kiss of the Spider Woman at the Signature Theatre in Arlington, Virginia, for which he received a nomination for the 2009 Helen Hayes Award for Outstanding Lead Actor.

He appeared in The Pajama Game opposite Kate Baldwin at The Muny (St. Louis) in July 2007. He starred in Oklahoma in 2007 at the Lyric Theatre opposite Kelli O'Hara, and on Broadway in the musical The Story of My Life in 2009.

He was nominated for the 2013 Tony Awards for Tony Award for Best Featured Actor in a Musical for his role as John Jasper / Mr. Clive Paget in the Broadway revival of The Mystery of Edwin Drood.

Chase guest starred as Michael Swift in the NBC series Smash. He then went on to play the role of country superstar Luke Wheeler on the television series Nashville. His other television appearances include Quantico, HBO's The Deuce, the recurring role of Pat Mahoney on Rescue Me, Cupid, Canterbury's Law, Law & Order, Third Watch, Conviction, and Queens Supreme, Hallmark's The Lost Valentine, alongside Jennifer Love Hewitt and Betty White; the 2011 season finale of Royal Pains (USA); Blue Bloods (CBS); and the ABC drama Pan Am. In 2012, he appeared on the series White Collar, in the episode "Neighborhood Watch", and appeared on the series Unforgettable, in the episode "The Comeback".

He played the title role in the 2013 film Butterflies of Bill Baker. Chase voices Angee in A Warrior's Tail (2016).

Chase assumed the role of William Shakespeare from Christian Borle on Broadway in the musical Something Rotten! on July 18, 2016.

He played Neil Hargrove in the second season of the American supernatural horror-science fiction web television series, Stranger Things, which premiered on Netflix on October 27, 2017, and appears in HBO's drama Sharp Objects as Bob Nash.

He portrayed Fred Graham/Petruchio opposite Kelli O'Hara in the 2019 Broadway revival of Kiss Me, Kate.

Chase has two daughters with Lori Chase, to whom he was married from 1998 to 2008 and was married to actress Stephanie Gibson from 2009 until their divorce in 2012.

He is in a relationship with musician Ingrid Michaelson.