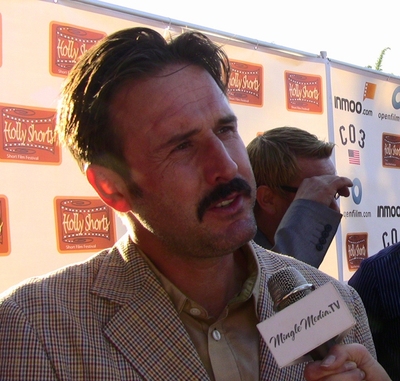 David Arquette (born September 8, 1971) is an American actor, film director, producer, screenwriter, and fashion designer. A member of the Arquette acting family, he first became known during the mid-1990s after starring in several Hollywood films, such as the Scream series, Wild Bill and Buffy the Vampire Slayer. He has since had several television roles, such as Jason Ventress on ABC's In Case of Emergency.

In addition to his acting career, Arquette took a brief foray into professional wrestling in early 2000, competing for World Championship Wrestling (WCW). During his tenure (and mostly as a plug for his movie Ready to Rumble), Arquette became a one-time WCW World Heavyweight Champion, an angle that has been cited by wrestling commentators as being pivotal to the degradation of the title and the demise of WCW.

Arquette was born in a Subud commune in Winchester, Virginia. The area had no electricity, bathrooms, or running water. He is the son of Brenda Olivia "Mardi" (née Nowak), an actress, poet, theater operator, activist, acting teacher, and therapist, and Lewis Arquette, an actor. Arquette's paternal grandfather was comedian Cliff Arquette. Arquette's mother was Jewish, the daughter of a Holocaust refugee from Nazi-occupied Poland, and his father was a convert to Islam from Catholocism. Arquette's siblings are actors Rosanna, Alexis, Richmond, and Patricia. The Arquettes had a dysfunctional upbringing, with a mother who was physically abusive and a father who abused substances.

Arquette appeared in a number of movies in the 1990s, including Buffy the Vampire Slayer (1992), Airheads (1994), and Never Been Kissed (1999). He had guest spots on television shows like Blossom (1992), Beverly Hills, 90210 (1992), and Friends (1996). Arquette arguably achieved his biggest success in the horror/slasher film franchise Scream. It was during the filming of the first film in 1996 that he first met his future wife, Courteney Cox. The couple married in 1999; together, they appeared in a 2003 advertisement for Coke and formed the production company Coquette (both a portmanteau of their last names and a word meaning a flirty woman), which has produced a number of films and television series, including Daisy Does America, Dirt, and Cougar Town. Arquette guest starred alongside Cox on Cougar Town in 2012.

In 2000, after filming the World Championship Wrestling (WCW) movie Ready to Rumble, Arquette was brought into WCW storylines. He made his first appearance on the April 12, 2000 episode of Thunder, sitting in the crowd before leaping into the ring to take part in a worked confrontation with Eric Bischoff and his New Blood stable. Afterwards, he formed an alliance with Chris Kanyon and the reigning WCW World Heavyweight Champion Diamond Dallas Page, and with their help, he defeated Bischoff in a match in the April 24 episode of WCW Monday Nitro. On the following episode of Thunder, Arquette teamed with Page in a match against Bischoff and Jeff Jarrett, with the stipulation that whichever man got the pin would take the championship. Arquette pinned Bischoff again in the match's finish, receiving the WCW World Heavyweight Championship in the process.

Arquette married actress Courteney Cox on June 12, 1999. They have a daughter, Coco Riley Arquette, born June 13, 2004. Jennifer Aniston is Coco's godmother. On October 11, 2010, it was announced that Arquette and Cox were having a trial separation but "still love each other deeply". In an interview with Howard Stern the following day, Arquette said that "it'd been like four months or so" since he and Cox had sex before they announced separation; when asked about Jasmine Waltz, whom Stern described as "that girl in the papers who looks like Courteney", Arquette stated: "I had sex with a girl once. Maybe twice." In June 2012, Arquette filed for divorce after nearly two years of separation from Cox.