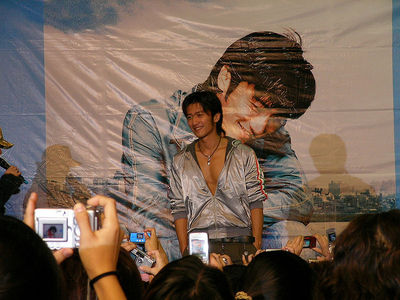 Nicholas Tse a.k.a. Tse Ting-fung, (born 29 August 1980) is a Hong Kong actor, singer, songwriter, musician and entrepreneur. Tse is a member of the Emperor Entertainment Group.

Tse initially entered the entertainment industry in 1996 as a singer. He originally learned martial arts from Philip Ng, Andy On and Sammo Hung for the screen and television, which Tse continues to practice. He made his film debut in 1998 with the crime film Young and Dangerous: The Prequel, for which Tse received the Hong Kong Film Award for his performance in the Best New Performer category. In 2003, Tse founded Post Production Office Limited, the biggest special effects companies in Hong Kong which provides services for movies, video games, and advertisements. The company grosses over one billion Hong Kong dollars annually each year.

In 2011, he won the award for Hong Kong Film Award for Best Actor.

Tse was born in Hong Kong on 29 August 1980, to Hong Kong actor Patrick Tse and actress Deborah Lee. Tse moved to Vancouver, Canada at a young age. He attended St. George's School, Vancouver, and later Hong Kong International School for one year before dropping out at grade 10. For a year he lived in Phoenix, Arizona before going back to Vancouver. He also studied music in Japan before returning to Hong Kong. He holds dual Canadian and Hong Kong citizenship. Tse has a younger sister, Jennifer Tse.

Tse was singing at a party for a family friend when he was discovered by Albert Yeung, head of Emperor Entertainment Group. In 1997, Tse signed a record deal with EEG under the Fitto label and released his first album, My Attitude. The album was ranked 3rd on the top selling CD chart of IFPI. It was that year where he won the most popular new artist award.

Tse received mainstream success in 1998 with songs including "Knew it would be like that" and "If there's only one week" and became a prominent heartthrob in the entertainment industry. He received a musical award during the 1999 Jade Solid Gold Top 10 Awards with his popular song (No choice but to leave). Recorded on 27 September 1993.

Tse's most notable films have included Young and Dangerous: The Prequel (1998), Gen-X Cops (1999), Time and Tide (2000), and Invisible Target (2007). He also collaborated with Jackie Chan in New Police Story (2004). Tse has also acted in romance films including Tiramisu (2002) and Jade Goddess of Mercy (2003). Only later in his career did he participate in comedy roles including Enter the Phoenix (2004), A Chinese Tall Story (2005), and McDull, the Alumni (2006). In the Hong Kong translated version of A Bug's Life, the character Flik was dubbed by Tse. He also lent his voice to the Chinese animation film Lotus Lantern (1999). Tse's performance in Bodyguards and Assassins (2009), earned him an Asian Film Award at the 4th Asian Film Awards for Best Supporting Actor, and in 2011, Tse received a Hong Kong Film Award for Best Actor at the 30th Hong Kong Film Awards for The Stool Pigeon (2010), beating out fellow actors Chow Yun-fat, Jacky Cheung, Tony Leung Ka-fai, and Nick Cheung.

Tse has starred in two TVB Hong Kong local dramas, Aiming High and The Monkey King: Quest for the Sutra. He also participated in a documentary produced by Television Broadcasts LimitedOn the Road II, made in Cambodia in 2007. The rest of his drama series were filmed and produced by companies in Mainland China . Most of Tse's drama are wuxia series, which are based in ancient Chinese societies.

Tse once had a relationship with musician Faye Wong, who is 11 years his senior but they broke up in 2002. On 31 July 2006, Tse officially admitted dating Cecilia Cheung in an interview with Hong Kong commercial radio station 881/903. On 29 September 2006, Tse showed off his wedding ring at the Hong Kong International Airport, announcing he and Cecilia Cheung were married in a secret wedding ceremony in Pamalican, Philippines. The couple's eldest son, Lucas Tse, was born on 2 August 2007. Cheung gave birth to their second son, Quintus Tse, on 12 May 2010. However, their deemed romantic relationship ended on 14 June 2011 when Tse reportedly filed for divorce with Cheung. On 21 September 2014 it was reported that Tse is back in a relationship with Faye Wong, who had divorced her latest spouse in 2013.