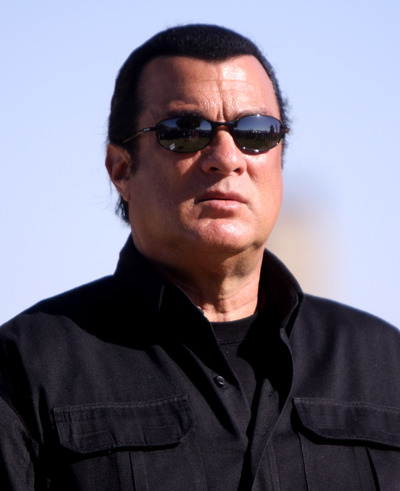 He later moved to the Los Angeles, California, area where he made his film debut in 1988 in Above the Law. By 1991, he had starred in three successful films, and would go on to achieve greater fame in Under Siege (1992), where he played Navy SEALs counter-terrorist expert Casey Ryback. However both On Deadly Ground (1994, which he directed) and Under Siege 2: Dark Territory (1995) did poorly in theaters. During the later half of the 90s, he starred in three more theatrical films and a direct-to-video The Patriot. Aside from Exit Wounds (2001) and Half Past Dead (2002), his career shifted almost entirely to direct-to-video films (often low budget productions and shot in Europe or Asia). Between 1998 to 2009, he appeared in a total of 22 of these. At the age of 59, he returned to the big screen as Torrez in the 2010 film Machete. As of 2011, he's currently busy with the third season of his reality show Steven Seagal: Lawman.

Seagal is also a recording artist and guitarist and the founder of Steven Seagal Enterprises. In addition to his professional achievements, he is also known as an environmentalist, an animal rights activist and a supporter of the 14th Dalai Lama Tenzin Gyatso, and the Tibetan independence movement.

Seagal was born in Lansing, Michigan, where he lived until he was five years old, when the family moved to California. His mother, Patricia (1930–2003), was a medical technician, and his father, Samuel Steven Seagal (1928–1991), was a high school math teacher. His mother was of Irish ancestry and his father was Jewish. In a Russian interview, Seagal once stated that he had a Mongolian grandfather (either Buryat or Kalmyk). His parents relocated to Fullerton, California, where Seagal attended Buena Park High School in Buena Park.

At a very young age, Seagal lied about his age and got a job as a dishwasher at a restaurant named The Wagon Wheel. One of the cooks at the restaurant was a Japanese shotokan karate expert and noticed Seagal moved very quickly around the kitchen. He taught Seagal the basics of karate. Seagal began training in aikido under master Harry Kiyoshi Ishisaka, founder of the Orange County Aikido School (Orange County Aiki Kai) (OCAK) in 1964. Seagal considers him to have been the most important martial arts teacher in his life. Seagal moved to Japan in his late teens after he went to Japan with his father who was visiting for military purposes and met karate masters and decided to remain in Japan. He received his 1st dan degree (Shodan) under the direction of Koichi Tohei. He continued to train in aikido as a student of Seiseki Abe, Koichi Tohei (whose aikido organization, Ki Society, Seagal refused to join in favor of staying with the Aikikai), Kisaburo Osawa, Hiroshi Isoyama and the second doshu Kisshomaru Ueshiba. He attained a 7th dan degree and Shihan in aikido and became the first foreigner to operate anaikido dojo in Japan. Seagal claims to have been subject to xenophobia in Japan and visited by many Japanese coming to try to kill him, resenting his teaching the Japanese.

When Seagal's father-in-law retired from his job as an instructor, Seagal became the new head of the organization known as Tenshin Aikido in Jūsō, Osaka City (affiliated with the Aikikai). Seagal is known by his students as Take Sensei. When Seagal left his dojo in Osaka, his then-wife Miyako became the caretaker of the dojo which has continued to the present day. Seagal initially returned to Taos, New Mexico, with his student (and later film stuntman) Craig Dunn, where they opened a dojo, although Seagal spent much of his time pursuing other ventures. After another period in Japan, Seagal returned to the U.S. in 1983 with senior student Haruo Matsuoka. They opened an aikido dojo, initially in North Hollywood, California, but later moved it to the city of West Hollywood. Seagal left Matsuoka in charge of the dojo, which he ran until the two parted ways in 1997.

In 1987, Seagal began work on his first film,Above the Law (titled Nico in Europe), with director Andrew Davis and reportedly as a favor to a former aikido student, the agent Michael Ovitz. Ovitz took Seagal to Warner Brothers to put on an aikido demonstration and the executives were impressed by him and offered him several scripts; Seagal turned them down but agreed to write what would become Above the Law. Following its success, Seagal made three more movies – Hard to Kill, Marked for Death, and Out for Justice – that were box office hits, making him an action hero. Later, he achieved wider, mainstream success in 1992 with the release of Under Siege (1992). That film reunited Seagal with director Andrew Davis, and was a blockbuster in the U.S. and abroad, grossing $156.4 million worldwide.

Seagal has three sisters, one older and two younger. Seagal has seven children from four relationships:

In Japan Seagal married his first wife, Miyako Fujitani, the daughter of an aikido instructor. With Fujitani, he had a son, model and actor Kentaro Seagal, and a daughter, writer and actress, Ayako Fujitani. Seagal left Miyako Fujitani to go back to the United States.

In the United States he married former Days of our Lives actress Adrienne La Russa, despite his divorce to Fujitani not yet being finalized. During his marriage to La Russa, Seagal reportedly saw actress and model Kelly LeBrock in the 1984 Gene Wilder film Woman in Red and said that she was "his destiny". He began a relationship with her and she eventually became pregnant with his child. When news of this emerged, Seagal's marriage to La Russa was annulled and he then married LeBrock on 5 September 1987. His three children with LeBrock are daughters Annaliza and Arissa, and son Dominic. In 1994, LeBrock filed divorce papers citing "irreconcilable differences". During this time it emerged that Seagal was having an affair with Arissa Wolf, who was hired to be a nanny to Seagal and Lebrock's children. Seagal has a daughter with Arissa Wolf, Savannah.

Seagal is currently married to Erdenetuya Batsukh, better known as Elle, and with whom he has a son, Kunzang. Elle is from Mongolia. She trained as a dancer from her early age at the Children's Palace in Ulaanbaatar, Mongolia. After her graduation from high school and the Children's Palace, she pursued a career as a professional dancer. She won numerous dancing contests and she was considered as the top female dancer in Mongolia. She particularly excelled in ballroom dance. Erdenetuya first worked as Seagal's interpreter when he visited Mongolia in 2001.

In addition to his biological children, he is the guardian to a Tibetan child, Yabshi Pan Rinzinwangmo. Rinzinwangmo, or "Renji", is the only child of the 10th Panchen Lamaof Tibet. Renji studied in the United States at American University, and Seagal was her guardian and bodyguard.

In addition to his seven children, he has two grandchildren by his eldest son Kentaro Seagal born in 2006 and 2007.