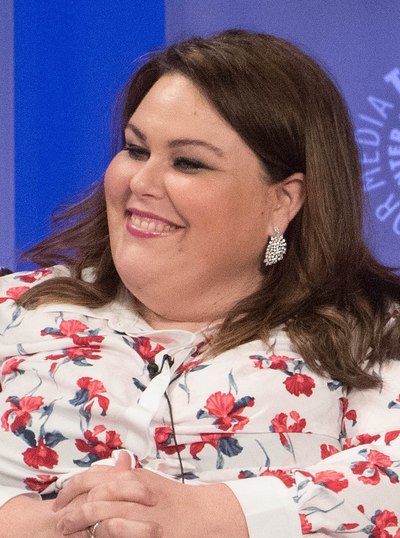 Christine Michelle Metz (born September 29, 1980) is an American actress and singer. She is known for playing Kate Pearson in the NBC drama This Is Us, for which she has earned Best Supporting Actress nominations at the Primetime Emmy Awards (2017) and Golden Globe Awards (2017 and 2018).

Metz was born to Denise and Mark Metz and raised in Homestead, Florida. She spent her formative years in Japan, where her father, Mark Metz, was stationed with the United States Navy. The family later moved back to Gainesville, Florida, where she attended elementary, middle, and high school. She grew up with her mother, stepfather, two siblings, and two half-siblings.

Metz is best known for her role as Kate Pearson in the NBC drama series This Is Us, which earned her Primetime Emmy Award and Golden Globe Award nominations. She is also known for her role in FX's American Horror Story: Freak Show.

Metz is a singer in her band Chrissy and The Vapors.

In early 2018, it was announced that Metz would star in The Impossible Movie, working with producer DeVon Franklin. She is cast as Joyce Smith, the mother of John, a 14-year-old boy who fell through an icy Missouri lake and was proclaimed dead. The movie, based on the book written by Smith herself, tells the true story of how a mother's devotion and dedication brings her son back to life.

On January 5, 2008, Metz married British journalist Martyn Eaden in a Santa Barbara, California beachside ceremony. They separated in January 2013, and Eaden filed for divorce from Metz in November 2014, citing "irreconcilable differences". On December 11, 2015, their divorce was finalized.