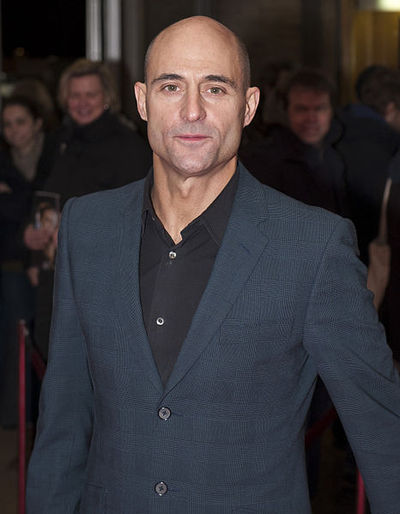 Strong was born in London, England, to an Austrian mother, Waltraud D. (née Schrempf), and an Italian father, Giuseppe A. Salussolia. His father left the family soon after his birth, and he was brought up by his mother, who worked as an au pair. His English name is not a stage name; when he was a child, his mother changed his name by deed poll to help him fit in with his peers. He was baptised a Catholic. He speaks fluent German and some Italian.

Strong attended Wymondham College, where he sang in the punk bands, the Electric Hoax and Private Party (the name of the latter was based on the idea that the band's shows would not be attended, due to prospective audiences thinking that the event was a "private party"). His original ambition was to become a lawyer, but after studying at university in Munich for one year, he decided to change his direction in life and returned home to London. There, he studied English and Drama at Royal Holloway, and later attended Bristol Old Vic Theatre School.

Strong is a familiar face on British television. He appeared in two Prime Suspect serials for ITV as Inspector (later Detective Chief Superintendent) Larry Hall, in Prime Suspect 3 (1993) and Prime Suspect 6 (2003). He also had starring roles in two BBC Two drama serials, Our Friends in the North (1996) and The Long Firm (2004), for which he earned a BAFTA nomination. He also played the villainous Colonel Brand in Sharpe's Mission (1996). He played the romantic lead, Mr. Knightley, in the 1996 ITV adaptation of Jane Austen's novel Emma. In feature films, Strong played Steve in the 1997 film adaptation of Nick Hornby's Fever Pitch opposite Colin Firth.

At the beginning of the 2000s he appeared in Heartlands and in Shakespeare's Twelfth Night at the Donmar Warehouse, for which he was nominated for the 2003 Laurence Olivier Award for Best Performance in a Supporting Role. He was later featured in Roman Polanski's Oliver Twist (2005), played Mussawi in the film Syriana, and played an assassin called Sorter in Revolver (2005). Strong portrayed the traitorous Wictred in Tristan & Isolde, showing his talent with swordplay, and since 2006, he has provided the narration in the BBC's genealogy series Who Do You Think You Are?.

In 2007 Strong was one of the final two actors considered for the part of Anton Chigurh in No Country for Old Men; despite the persistence of rumours, he claims he was never offered the part. Strong was Pinbacker, the insane captain of Icarus I, the first ship that was sent to reignite the Sun in Sunshine (2007). Pinbacker was inspired by the character of Sergeant Pinback from Dark Star. The character's disfiguring burns were influenced by the injuries suffered by F1 driver Niki Lauda. Boyle described the character of Pinbacker as a representation of fundamentalism. The director also described the potentially unrealistic presence of Pinbacker as an example of something that breaks the pattern of realism, similar to his scene in Trainspotting (1996) in which Ewan McGregor's character dives into a toilet. Strong played prince Septimus, the youngest of the seven Stormhold princes, in Stardust (2007).

He lives in London with his wife, Liza Marshall, and their two sons. In an interview he said he is content living a relatively normal life in London: “I’ve got no desire to live anywhere else. I was born here, my wife was born here, my kids were born here and this is where we’re going to stay,” he says. “I feel like I have a lovely balance. I’m able to keep my head below the parapet. I get on with my work, I have a family and I get on the tube. It just so happens that I’m doing this job.”

He is a longtime friend of actor Daniel Craig, who is the godfather of Strong's eldest son. He dubbed Craig into German, as German with an English accent was required for Obsession (1997).