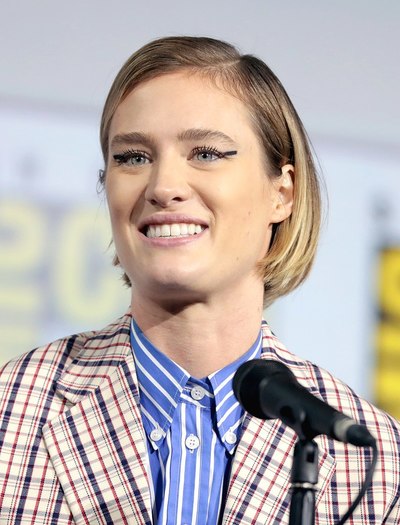 Mackenzie Davis (born April 1, 1987) is a Canadian actress. She made her feature film debut in Smashed, and later appeared in Breathe In, That Awkward Moment, The Martian, Blade Runner 2049, and The F Word, the last for which she received a Canadian Screen Award nomination. From 2014 to 2017, she starred as computer programmer Cameron Howe in the television series Halt and Catch Fire. She also co-starred in the "San Junipero" episode of the television series Black Mirror.

Davis was born in Vancouver, British Columbia, to Lotte, a graphic designer from South Africa, and John Davis, a hairdresser, from Liverpool, England. Her parents own AG Hair Care. She graduated high school in West Vancouver from Collingwood School in 2005 and then attended McGill University in Montreal, Quebec. She went on to study acting at the Neighborhood Playhouse in New York City.

Davis was discovered by Drake Doremus, who decided to cast her for a supporting role in the feature film Breathe In. In 2015, she appeared in The Martian as a NASA satellite communications engineer named Mindy Park. She also acted in a lead role in Halt and Catch Fire for the duration of its four-season run. In June 2016, Davis was cast as Mariette in Blade Runner 2049.

In 2016, she starred in "San Junipero", an episode of the anthology series Black Mirror. In October 2019, she was cast as one of the lead roles in the HBO Max miniseries Station Eleven.