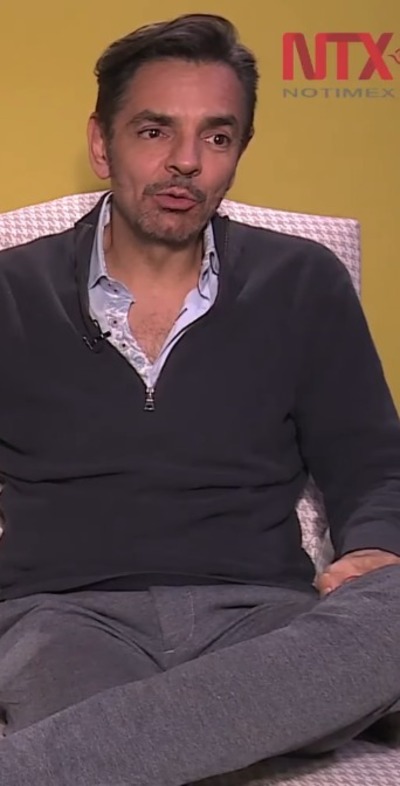 Eugenio Alexandrino González Derbez (born September 2, 1961) is a Mexican actor, comedian and filmmaker. In 2014, he was recognized by Variety as the most influential Hispanic male in the entertainment industry.

His feature film Instructions Not Included, which he directed, co-wrote and starred in became the most successful Spanish language film in the U.S. and worldwide and broke numerous box office records, earning more than $100 million worldwide.

With Gus Rodríguez, Eugenio is the star, writer, director, producer, and creator of some of the most popular Spanish language TV shows of all time including Al Derecho y Al Derbez, Derbez en cuando, XHDRBZ, Vecinos and La familia P. Luche.

Derbez was born in Mexico City, Mexico, the son of actress Silvia Derbez and publicist Eugenio González Salas. He made his television debut at 12, acting as an extra in a telenovela. Derbez kept acting during his school years and took his first formal acting class at age 19, when he began acting in .

During the early 1980s, Derbez was a regular in Cachún Cachún Ra Ra!, a Mexican television show. He also participated in En Familia con Chabelo, a children's television show.

In 1988 he got his first recurring television position when he played a number of roles in a comedy show called Anabel. Derbez kept making movies during the 1990s. In 1992 he began hosting the variety show Al Derecho y al Derbez.

In 1997 Derbez made his directing debut in a soap opera named No Tengo Madre. In 1999 Derbez started a comedy show, Derbez en Cuando. Derbez appeared in Carita de Angel in 2000. He also starred that year in Cómplices al Rescate ("Accomplices to the Rescue"). In 2003 he produced a television series named XHDRBZ. He later produced Hospital el Paisa ("Countrymen Hospital"), Vecinos ("Neighbors"), and in 2009 Ellas son... la alegría del hogar. He was the leading man in La familia P. Luche'.

Derbez is one of the few Mexican actors to have achieved international acclaim, earning international award recognition as well as starring in commercial American films.

Derbez has appeared in a number of successful and critically acclaimed films including Sangre de mi Sangre, which won the Grand Jury Prize at Sundance in 2007 and his first non-comedy film, the indie smash hit La Misma Luna (aka Under the Same Moon) directed by Patricia Riggen, with Adrián Alonso and Kate del Castillo.

In 2011 Derbez starred in Adam Sandler’s Jack and Jill as Felipe starring with Adam Sandler, Katie Holmes and Al Pacino; he also starred in Girl In Progress, with Eva Mendes, also directed by Patricia Riggen. Eugenio also starred in the CBS sitcom Rob! and on Broadway in Latinologues at the Helen Hayes Theater.

Derbez starred in Sony’s Miracles from Heaven, with Jennifer Garner (directed by Patricia Riggen), and he voiced the role of Rico in the animated feature Underdogs, directed by Juan J. Campanella.

In 2013, Derbez starred in and directed Instructions Not Included the most successful Spanish-language film in the U.S. and worldwide, which broke numerous box office records, earning over $100 million. The Spanish-language comedy-drama became a surprise $44 million hit in the U.S., and the third highest-grossing film ($46 million) of the year in Mexico (only Despicable Me and Iron Man sequels did better).

In 2016, Eugenio wrapped production on the Lionsgate/Pantelion feature How to Be a Latin Lover in which he starred with Salma Hayek, Rob Lowe, Kristen Bell, Raquel Welch, Rob Riggle, Linda Lavin and Rob Huebel. It was written by Chris Spain and Jon Zack and directed by Ken Marino. The film, produced by Derbez and his producing partner Ben Odell, was released in the U.S. on April 28, 2017 and May 5, 2017 in Mexico.

Eugenio Derbez is one of Mexico's more successful comedic actor and directors. He was recognized by Variety in 2014 as the #1 most influential Hispanic male in the world. In March 10, 2016, Derbez unveiled his star on Hollywood's Walk of Fame. The ceremony was attended by thousands of fans.

In 2014, following the success of Instructions Not Included, Derbez partnered with former Pantelion President of Production Benjamin Odell to create 3Pas Studios, his film production company in Los Angeles.

Eugenio currently resides in Los Angeles with his family. Derbez is married to Alessandra Rosaldo, actress, model, and former Sentidos Opuestos singer. He is father to Mexican comedic actress Aislinn Derbez, Mexican actor and singer Vadhir Derbez, Mexican actor Jose Eduardo Derbez and Aitana Derbez. He is a vegetarian, but eats eggs. He has a bulldog named Fiona.