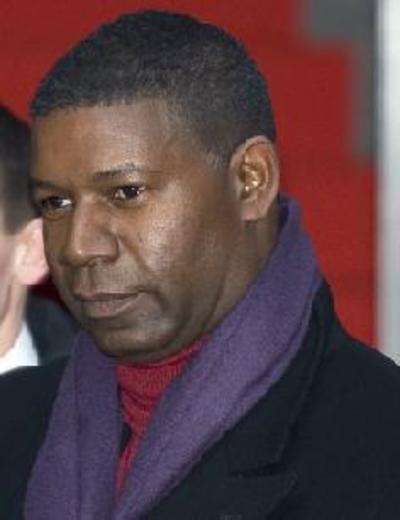 Dennis Dexter Haysbert (born June 2, 1954) is an American film and television actor. He is known for portraying baseball player Pedro Cerrano in the Major League film trilogy, President David Palmer on the American television series 24, and Sergeant Major Jonas Blane on the drama series The Unit, as well as his work in commercials for Allstate Insurance.

Dennis Dexter Haysbert was born in San Mateo, California, the son of Gladys (née Minor), a homemaker and house cleaner, and Charles Whitney Haysbert, Sr., a deputy sheriff and airline security guard. He is the eighth of nine children, having two sisters and six brothers. His parents were from Louisiana. Haysbert was raised Baptist. Haysbert graduated from San Mateo High School in 1972. After high school, measuring 6 feet 4.5 inches (1.94 m) tall, he was offered various athletic scholarships, but instead chose to study acting at the American Academy of Dramatic Arts.

Haysbert has been acting in film and television since 1979, starting with a guest role in The White Shadow. His television guest starring roles include Lou Grant, Growing Pains, Laverne & Shirley, The A-Team, Night Court, Dallas, The Incredible Hulk, Magnum, P.I. and Buck Rogers in the 25th Century.

In 2001, Haysbert became better known when he was cast in 24 as U.S. Senator David Palmer, who served as America's first African American President (in the context of the show) during the second and third seasons. He also returned as a guest star in the last six episodes of season 4 and the first episode of season 5. He was nominated for a Golden Globe and for a Golden Satellite Award in 2002 for this role. Haysbert stated in an interview for the show that the three men he admires most—Jimmy Carter, Bill Clinton and Colin Powell—collectively embody his idea of what a President should be. Haysbert believes that his playing of David Palmer on 24 helped Barack Obama—whom Haysbert supported—to win the 2008 Democratic presidential nomination.

Haysbert is a divorced father of two. He announced in April 2009 that he was starting a TV, film, and documentary production company. His first project was to be a documentary for HBO about an up-and-coming boxer. During the 2010 California elections, Haysbert supported Democratic Senatorial Incumbent Barbara Boxer by appearing with her at campaign events as well as recording radio commercials.