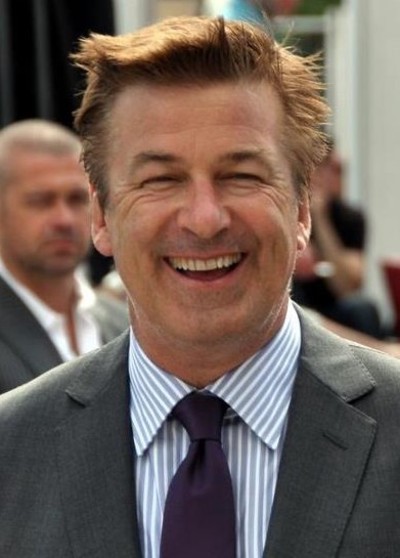 Alexander Rae "Alec" Baldwin III (born April 3, 1958) is an American actor, producer, and comedian. As a member of the Baldwin family, he is the oldest of the four Baldwin brothers, all well-known actors.

Baldwin first gained recognition appearing on seasons 6 and 7 of the CBS television drama Knots Landing, in the role of Joshua Rush. He has since played both leading and supporting roles in films such as the horror comedy fantasy film Beetlejuice (1988), as Jack Ryan in the action thriller The Hunt for Red October (1990), the romantic comedy The Marrying Man (1991), the superhero film The Shadow (1994), and two films directed by Martin Scorsese: the Howard Hughes biopic The Aviator (2004) and the crime drama The Departed (2006). His performance in the 2003 romantic drama The Cooler garnered him a nomination for the Academy Award for Best Supporting Actor.

From 2006 to 2013, Baldwin starred as Jack Donaghy on the NBC sitcom 30 Rock, winning two Emmy Awards, three Golden Globe Awards, and seven Screen Actors Guild Awards for his work on the show, making him the male performer with the most SAG Awards. He is also a columnist for The Huffington Post.

Baldwin was born in Amityville, New York, and raised in the Nassau Shores neighborhood of nearby Massapequa, the eldest son of Carol Newcomb (née Martineau) and Alexander Rae Baldwin, Jr. (October 26, 1927 – April 15, 1983), a high school history/social studies teacher and football coach. He has three younger brothers, Daniel, William, and Stephen, who also became actors. He also has two sisters, Beth and Jane. Alec and his siblings were raised as Roman Catholics. They are of English, Irish, Scottish, French, and German ancestry.

Baldwin attended Alfred G. Berner High School in Massapequa and played football there under Coach Bob Reifsnyder. In New York City, Baldwin worked as a busboy at the disco Studio 54. From 1976 to 1979, he attended George Washington University, afterward transferring to New York University's Tisch School of the Arts. There he studied with, among others, Geoffrey Horne and Mira Rostova at the Lee Strasberg Theatre Institute,[4] Later, he was accepted as a member of the Actors Studio. Baldwin eventually returned to NYU in 1994, graduating with a Bachelor of Fine Arts degree that year.

Baldwin made his Broadway debut in 1986 in a revival of Joe Orton's Loot alongside Zoë Wanamaker, Željko Ivanek, Joseph Maher and Charles Keating. This production closed after three months. His other Broadway credits include Caryl Churchill's Serious Money with Kate Nelligan and a revival of Tennessee Williams' A Streetcar Named Desire, for which his performance as Stanley Kowalski garnered a Tony Award nomination for Best Actor. Baldwin also received an Emmy nomination for the 1995 television version of the production, in which both he and Jessica Lange reprised their roles, alongside John Goodman and Diane Lane. In 1998, Baldwin played the title role in Macbeth at The Public Theater alongside Angela Bassett and Liev Schreiber in a production directed by George C. Wolfe. In 2004, Baldwin starred in a revival of Twentieth Century with Anne Heche.

Baldwin's first acting role was as Billy Aldrich in the NBC daytime soap opera The Doctors from 1980 to 1982. In fall 1983, he starred in the short-lived television series Cutter to Houston. He went on to appear as the brother of Valene Ewing and son of Lilimae Clements (played by Joan Van Ark and Julie Harris, respectively) in Knots Landing from 1984–85. In 1986, Baldwin starred in Dress Gray, a four-hour made-for-television miniseries, as an honest cadet sergeant who tries to solve the mystery of a murdered gay classmate. In 1998, he became the third narrator and George Carlin's replacement for the fifth and sixth seasons of Thomas the Tank Engine & Friends. He left the series in 2002 on winning the role of Lawrence Quinn in The Cat in the Hat and was replaced by Michael Brandon.

In 2002, Baldwin appeared in two episodes of Friends as Phoebe Buffay's overly enthusiastic love interest, Parker. He also portrayed a recurring character in a number of episodes in seasons 7 and 8 of Will & Grace, in which he played Malcolm, a "top secret agent" and the lover of Karen Walker (Megan Mullally). He also guest-starred in the first live episode of the series. Baldwin wrote an episode of Law & Order entitled "Tabloid", which aired in 1998. He played Dr. Barrett Moore, a retired plastic surgeon, in the series Nip/Tuck. He starred as Jack Donaghy on NBC's 30 Rock, which first aired October 2006. He met his future co-stars Tina Fey and Tracy Morgan while appearing on Saturday Night Live, and is one of only two actors to whom Lorne Michaels has extended a standing offer to host the show should their schedules permit (the other being Christopher Walken). Since season 3, Baldwin was credited as producer of the show.

Baldwin has won two Emmy Awards, two Golden Globe awards and seven Screen Actors Guild Awards for his role. He received his second Emmy nomination for Best Actor in a Television Comedy or Musical as Jack Donaghy in 2008, marking his seventh Primetime Emmy nomination and first win. He won again in 2009.

Baldwin made his film debut with a minor role in the 1987 film Forever, Lulu. In 1988, he appeared in Beetlejuice and Working Girl. He gained further recognition as a leading man with his role as Jack Ryan in The Hunt for Red October (1990).

Baldwin met his future wife Kim Basinger when they played lovers in the 1991 film The Marrying Man. Next, Baldwin played a ferocious sales executive in Glengarry Glen Ross (1992), a part added to the film version of David Mamet's Pulitzer Prize-winning stage play (including the monologue "Coffee's for closers"). Later that year, he starred in Prelude to a Kiss with Meg Ryan, which was based on the Broadway play. The film received a lukewarm reception by critics and grossed only $22 million worldwide. He appeared with Basinger again in The Getaway, a 1994 remake of the 1972 Steve McQueen film of the same name.

Also in 1994, Baldwin made a foray into pulp fiction-based movies with the role of the title character in The Shadow. The film made $48 million. In 1996 and 1997, he continued to work in several thrillers, including The Edge, The Juror and Heaven's Prisoners.

Baldwin shifted towards character acting, beginning with Pearl Harbor in 2001. He played Lt. Col. James Doolittle in the film. With a worldwide box office of $449,220,945, this film remains the highest-grossing film Baldwin has appeared in during his acting career. Baldwin was nominated for an Academy Award, a Golden Globe, and the Screen Actors Guild Award for his performance in the 2003 gambling drama The Cooler. He appeared in Martin Scorsese's The Aviator (2004) and The Departed (2006). In 2006, he starred in the film Mini's First Time. He performed opposite Sarah Michelle Gellar in Suburban Girl (2007). Two years later, he co-starred in the hit romantic comedy It's Complicated with Meryl Streep and Steve Martin.

By August 2011, Baldwin began dating Hilaria Thomas, a yoga instructor with Yoga Vida in Manhattan. Baldwin and Thomas moved from the Upper West Side to Greenwich Village that August. The couple became engaged in April 2012 and married on June 30, 2012, at St. Patrick's Old Cathedral in New York City. They have one daughter together, Carmen, who was born on August 23, 2013. On June 17, 2015 Alec and Hilaria announced the birth of their son on twitter - Rafael Thomas Baldwin.