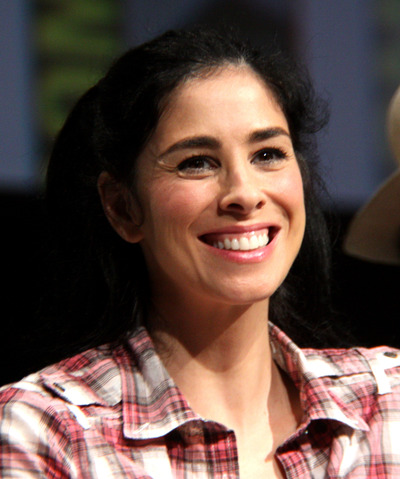 Sarah Kate Silverman (born December 1, 1970) is an American comedienne, writer, and actress. Her satirical comedy addresses social taboos and controversial topics such as racism,sexism, and religion by having her comic character endorse them in an ironic fashion.

Silverman first gained notice as a writer and occasional performer on Saturday Night Live and starred in and produced The Sarah Silverman Program, which ran from 2007 to 2010 on Comedy Central.

Silverman was born in Manchester, New Hampshire, to Beth Ann and Donald Silverman. Her mother and father divorced and remarried John O'Hara (deceased) and Janice, respectively.

Silverman is the youngest of four siblings: Rabbi Susan, screenwriter Jodyne, and actress Laura Silverman. She is Jewish, though was not "raised with any religion."

After graduating from The Derryfield School in Manchester, New Hampshire, she attended New York University and continued her standup in Greenwich Village.

Silverman first received national attention in the 1993–94 season of Saturday Night Live (SNL) as a writer and featured player. She was fired after one season because only one of the sketches she wrote survived to dress rehearsal, and none aired. Bob Odenkirk, a former SNL writer, explained, "I could see how it wouldn't work at SNL because she's got her own voice, she's very much Sarah Silverman all the time. She can play a character but she doesn't disappear into the character—she makes the character her." Silverman states she was upset when SNL fired her via fax. She parodied the situation when she appeared on The Larry Sanders Show episode "The New Writer" (1996), playing Sanders's new staff writer, whose jokes are not used because of the chauvinism and bias of the male chief comedy writer, who favors the jokes of his male co-writers. She appeared in three episodes of Larry Sanders during its final two seasons.

Silverman's television sitcom The Sarah Silverman Program debuted on Comedy Central in February 2007. The show proved to be a ratings success, scoring the highest premiere ratings of any Comedy Central show in three years, with 1.81 million viewers and the highest 18–49 rating of the night on cable. It portrays the day-to-day adventures of fictionalized versions of Silverman, her sister Laura, and their friends. A number of comedic actors from Mr. Show have appeared onThe Sarah Silverman Program. Silverman was nominated for a Primetime Emmy Award for her acting on the show.