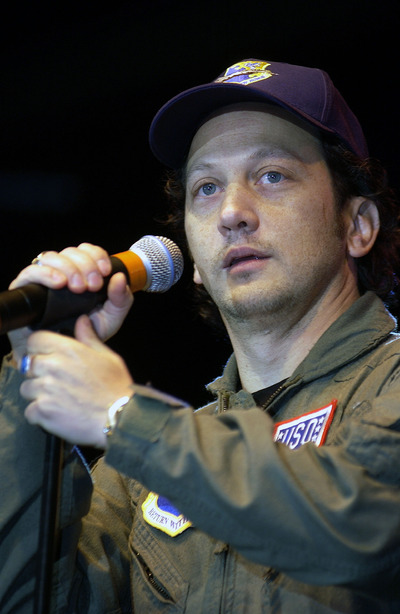 Robert Michael "Rob" Schneider (born October 31, 1963) is an American actor, comedian, screenwriter, and director. A stand-up comic and veteran of the NBC sketch comedy series Saturday Night Live, Schneider has gone on to a successful career in feature films, including starring roles in the comedy films Deuce Bigalow: Male Gigolo, The Hot Chick, and Grown Ups.

Schneider was born in San Francisco, California, and grew up in the nearby suburb of Pacifica. He is the son of Pilar Schneider (née Monroe), a former kindergarten teacher and ex-school board president, and Marvin Schneider, a real estate broker. Schneider's father was Jewish and Schneider's mother was Catholic. His maternal grandmother was a Filipina who met and married his maternal grandfather, a Caucasian American army private, while he was stationed in the Philippines. Schneider graduated from Terra Nova High School in 1982.

Schneider started his stand-up comedy career while still in high school, opening for San Francisco favorites Head On, a band managed by Rob's older brother John. After high school, he played Bay Area nightclubs such as the Holy City Zoo and The Other Cafe, and was a regular guest on local radio programs. After opening a show by comedian Dennis Miller in 1987, Schneider won a slot on HBO's 13th Annual Young Comedians special, which was hosted by Miller. Schneider's appearance on the HBO special led to a position as a writer for the late night NBC sketch comedy series Saturday Night Live.

Schneider was hired at Saturday Night Live in 1988. Schneider swiftly graduated from writer and featured player to full cast member. From 1990 to 1994 at SNL, he played such roles as "Tiny Elvis" and "Orgasm Guy". His best known recurring character was "Richard Laymer", an office worker whose desk was stuck beside the photocopier, and who addressed each of his fellow employees with an endless stream of annoying nicknames. Schneider is featured in the video release The Bad Boys of Saturday Night Live, along with colleagues Adam Sandler, Chris Rock, David Spade and Chris Farley.

After leaving SNL, Schneider played supporting roles in a series of movies including Surf Ninjas, Judge Dredd, The Beverly Hillbillies, Demolition Man and Down Periscope. He also appeared in a recurring part on the TV series Coach. In 1996, he co-starred in the NBC sit-com Men Behaving Badly, an American take on the hit British series of the same name. The U.S. version ran for two seasons.

Schneider starred in the 1999 feature film Deuce Bigalow: Male Gigolo, a tale of a fish-tank cleaner who incurs a massive debt and is forced to become a "man-whore." This was followed by The Animal, about a man given animal powers by a mad scientist; The Hot Chick, wherein the mind of a petty thief played by Schneider is mystically switched into the body of a pretty, but mean-spirited high school cheerleader (Rachel McAdams); and the sequel Deuce Bigalow: European Gigolo. The latter movie was not well received by critics or moviegoers, and as a result, Schneider won a 2005 Worst Actor Razzie Award for his role in the film.