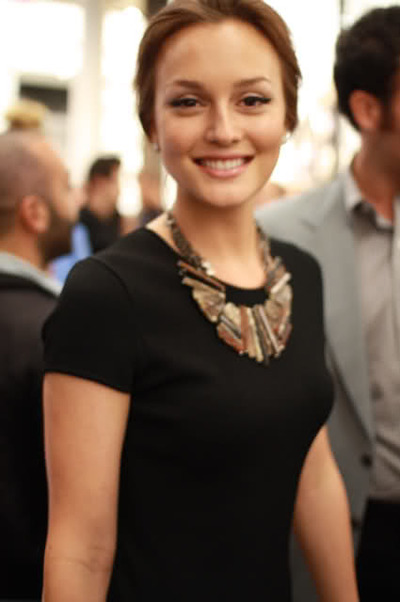 In addition to her acting career, Meester has also ventured into music. She released two singles, recorded songs for various soundtracks and collaborated with several artists, being notably featured on Cobra Starship's "Good Girls Go Bad". Her musical style has since shifted from pop to folk. In 2012, she embarked on a mini tour with folk band Check in the Dark, with whom she has been working since 2010.

Meester was born in Fort Worth, Texas, to Constance (née Haas) and Douglas Meester, and lived most of her life in New York City and Los Angeles. Meester's last name is the Dutch word for "master" or "teacher". At the time of her birth, her mother was serving time in a federal prison for her involvement in a drug ring that smuggled marijuana from Jamaica to the USA. She was able to give birth to Leighton in a hospital and nurse her for three months in a halfway house, before returning to prison to complete her sentence, after which Leighton's grandmother cared for her. She has a brother, Alexander, who is 8 years younger. Meester has maintained that her parents gave her a normal upbringing and, despite their criminal past, are good people with experience that has only made Meester more open-minded and non-judgmental, "It made me realize that you can't judge anyone — especially your parents — for what they've done in their past, because people change." Meester has joked, "Look, I could've turned out a lot worse." She has cited her mother as her style icon. Her father works for an internet company and her mother is a writer.

Meester grew up in Marco Island, Florida, where she participated in productions at a local playhouse. When she was 11 years old, Meester and her mother moved to New York City. Meester attended the Professional Children's School and also began working as a model with Wilhelmina, booking a Ralph Lauren campaign shot by Bruce Weber and working with then photographer (now film maker) Sofia Coppola as well as many commercials including Tamagotchi toys and Clearasil. She has also posed for Limited Too campaigns alongside fellow future actress, Amanda Seyfried, in which Seyfried recalls, "Leighton was very confident." Meester made her television acting debut as a murder victim's friend on an episode of Law & Order. At 14, Meester moved to Los Angeles, California, wanting more stable work, and attended Hollywood High School and Beverly Hills High School. She then transferred to a small private school and graduated a year early.

After her television debut in 1999 playing Alyssa Turner in Law & Order, Meester appeared as a guest in two more series before landing her big role in the movie Hangman's Curse, based on the best-selling book by Frank Peretti. She appeared in Tarzan, which ran for only eight episodes. Meester then started to land guest roles in other series such as Crossing Jordan, 8 Simple Rules, 7th Heaven, Veronica Mars, 24, and Entourage.

In 2005, Meester began a regular role in the series Surface as Savannah Bennet. Meester appeared in two more 2006 movies, Flourish and Inside. She also guest appeared in Numb3rs and in two episodes of House M.D. as Ali, a young girl who has a crush on House. She had guest roles on CSI: Miami and Shark, and played the female lead in the horror film Drive-Thru.

In 2007, Meester was cast in the CW's teen drama series Gossip Girl as Blair Waldorf. The show is based on the book series by Cecily von Ziegesar about the lives of New York's privileged Upper East Side young adults. Her performance was the most critically acclaimed of the show, with Blair being cited as the series' breakout character, and also garnering much media recognition due to her wardrobe. She dated Gossip Girl co-star Sebastian Stan.

In July 2011, she and her mother filed lawsuits against each other regarding Meester's financial support of her younger brother, who has multiple health problems. Meester's suit claims the money she sent was used by her mother for "cosmetic procedures"; her mother's suit makes a cross-claim alleging breach of contract and physical abuse. In November 2011, Constance Meester dropped the $3 million claim for damages against her daughter. As a result, Leighton obtained a default judgment on December 7, 2011. In June 2012, Meester subsequently won the lawsuit, with the judge rejecting her mother's claims from her previous counter-suit.

Meester was in a relationship with her Gossip Girl co-star Sebastian Stan for about two years, from 2008 to 2010. In 2012, she briefly rekindled a romance with her Remember the Daze co-star Aaron Himelstein, after initially dating in 2007, but then began dating former The O.C actor Adam Brody whom she met while on the set of The Oranges. In November 2013, the couple became engaged after a year of dating and married in February 2014 in a private ceremony.