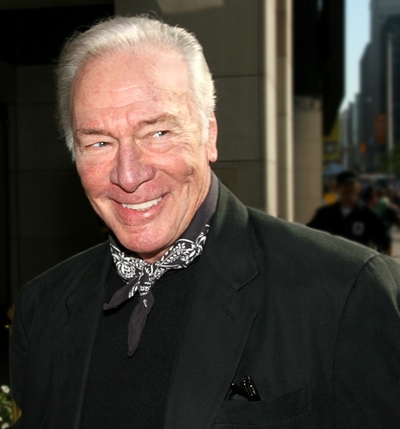 Arthur Christopher Orme Plummer CC (born December 13, 1929) is a Canadian theatre, film and television actor. He made his film debut in 1958's Stage Struck, and notable early film performances include The Night of the Generals, The Return of the Pink Panther, The Man Who Would Be King and the 1969 classic Lock Up Your Daughters.

In a career that spans seven decades and includes substantial roles in each of the dramatic arts, Plummer is probably best known to film audiences as the autocratic widower Captain Georg Ludwig von Trapp in the hit 1965 musical film The Sound of Music alongside Julie Andrews. Plummer has also ventured into various television projects, including the legendary miniseries The Thorn Birds.

His most recent film roles include the The Insider as Mike Wallace, the Disney–Pixar 2009 film Up as Charles Muntz, the Shane Acker production 9 as 1, The Last Station as Leo Tolstoy, The Imaginarium of Doctor Parnassus as Doctor Parnassus, The Girl with the Dragon Tattoo as Henrik Vanger, and Beginners as Hal.

Plummer has won numerous awards and accolades for his work, including an Academy Award, two Emmy Awards, two Tony Awards, a Golden Globe Award, a SAG Award, and a BAFTA Award. With his win at the age of 82 in 2012 for Beginners, Plummer is the oldest actor and person ever to win an Academy Award.

Plummer was born in Toronto, Ontario, the son of Isabella Mary (née Abbott) and John Orme Plummer, who was secretary to the Dean of Sciences at McGill University. Through his mother, Plummer is a great-grandson of Canadian Prime Minister Sir John Abbott, and a great-great-grandson of Anglican clergyman and McGill acting president John Bethune. Plummer was an only child. His parents were divorced shortly after he was born, and he was brought up at the Abbott family home in Senneville, Quebec, outside Montreal. He is bilingual. He studied to be a concert pianist, but developed a love for the theatre at an early age. He began acting while he was living on Pine Avenue in Montreal and attending Montreal High. Plummer took up acting after seeing Laurence Olivier's film Henry V (1944). In 1946, his performance as Mr. Darcy in the production of Pride and Prejudice at Montreal High brought Christopher Plummer to the attention of Herbert Whittaker, the theatre critic of the Montreal Gazette. Whittaker, who was also amateur stage director the Montreal Repertory Theatre, cast Christopher Plummer as Oedipus in Cocteau'sLa Machine infernale when he was only 18 years old.