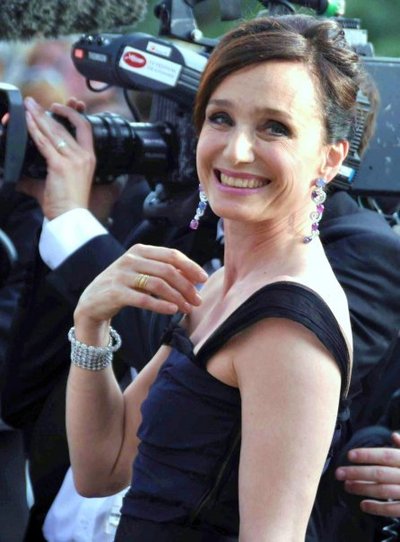 Kristin A. Scott Thomas, OBE (born 24 May 1960) is an English-French actress. She gained international recognition in the 1990s for her roles in Bitter Moon, Four Weddings and a Funeral, The English Patient and Nowhere Boy.

Since the 1980s, she has also worked in French cinema in films such as the thriller Tell No One and Philippe Claudel's I've Loved You So Long. She has lived in France since she was 19, has brought up her three children in Paris, and says she considers herself more French than British. She was made a Chevalier of the Légion d'honneur in 2005.

Scott Thomas is also the official Ambassador for Accor's MGallery Collection of hotels and resorts.

Kristin Scott Thomas was born in Redruth, Cornwall. Her mother, Deborah (née Hurlbatt), was brought up in Hong Kong and Africa, and studied drama before marrying Kristin's father, Lieutenant Commander Simon Scott Thomas, a pilot for the Royal Navy's Fleet Air Arm who died in a flying accident when Kristin was five. She is the elder sister of actress Serena Scott Thomas, the niece of Admiral Sir Richard Thomas (who was a Black Rod in the House of Lords), and a more distant great-great-niece of Captain Scott, the ill-fated explorer who lost the race to the South Pole.

Scott Thomas was brought up as a Roman Catholic. Her childhood home was in Trent, Dorset, England. Scott Thomas was educated at Cheltenham Ladies' College and St. Antony's Leweston in Sherborne, Dorset, both independent schools. On leaving school she moved to Hampstead, London, and worked in a department store. She then began training to be a drama teacher at the Central School of Speech and Drama. On being told she would never be a good enough actress, she left at the age of 19 to work as an au pair in Paris. Speaking French fluently, she studied acting at the École nationale supérieure des arts et techniques du théâtre (ENSATT) in Paris, and at age 25 on graduation, was cast opposite pop star Prince as Mary Sharon, a French heiress, in the 1986 film Under The Cherry Moon.

Her real breakout role was in a 1988 adaptation of Evelyn Waugh's A Handful of Dust, where she won an Evening Standard British Film Award for most promising newcomer. This was followed by roles opposite Hugh Grant in Bitter Moon and Four Weddings and a Funeral where she won a BAFTA for Best Supporting Actress.