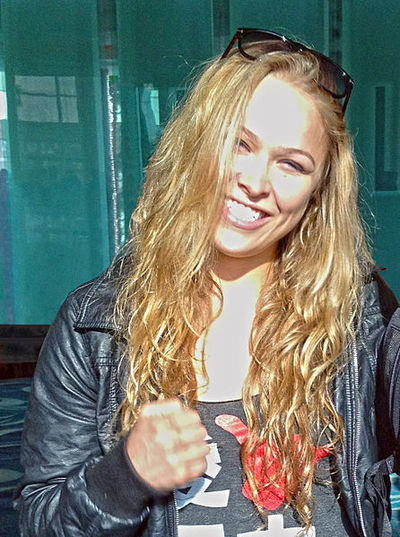 Ronda Jean Rousey (born February 1, 1987) is an American mixed martial artist, judoka and actress. She is the first and current UFC Women's Bantamweight Champion, as well as the last Strikeforce Women's Bantamweight Champion. She is undefeated in mixed martial arts, having won nine of her eleven fights by armbar. Rousey became the first U.S. woman to earn an Olympic medal in Judo at the Summer Olympics in Beijing in 2008.

Rousey trains under Gokor Chivichyan of the Hayastan MMA Academy, and Edmond Tarverdyan of the Glendale Fighting Club. She formerly trained at the Olympic Training Center in Wakefield, Massachusetts, under the guidance of Jimmy Pedro and is now part of Team Hayastan in Santa Monica, California. Rousey also trains with Romanian Leo Frîncu and Gene Lebell, along with Team Hayastan fighters such as Manny Gamburyan, Karen Darabedyan, Karo Parisyan and Sako Chivitchian. She is managed by Darin Harvey of Fight Tribe MMA. In July 2012, Rousey enlisted former undefeated boxing and kickboxing champion Lucia Rijker as striking coach.

Rousey's first feature film role was the 2014 film The Expendables 3. In 2015, she has roles in the films Furious 7 and the upcoming Entourage. Her first professional wrestling storyline began at WrestleMania 31, when she and Furious 7 co-star The Rock confronted Triple H and Stephanie McMahon.

Rousey was born in Riverside County, California, the daughter of Ron Rousey and AnnMaria De Mars (née Waddell). Her mother had a decorated Judo career and was the first American to win a World Judo Championship with her victory in 1984. Her maternal grandfather was Venezuelan and was of part Afro-Venezuelan ancestry. Her other ancestry includes English and Polish. Her step-father is an aerospace engineer.

Rousey dropped out of high school and later earned a G.E.D. She was raised in Jamestown, North Dakota, retiring from her judo career at 21 and starting her MMA career at 22 when she realized that she did not want to spend her life in a conventional field of work.

Rousey began Judo with her mother at the age of 11. At 17, Rousey qualified for the 2004 Olympic Games in Athens, becoming the youngest judoka in the entire Games. Also in 2004, Rousey won a gold medal at the 2004 World Junior Judo Championships in Budapest, Hungary.

In April 2006, she became the first female U.S. judoka in nearly 10 years to win an A-Level tournament as she went 5-0 to claim gold at the Birmingham World Cup in Great Britain. Later that year, the 19-year-old won the bronze medal at the Junior World Championships, becoming the first U.S. athlete ever to win two Junior World medals.

In February 2007, Rousey moved up to 70 kg where she ranked as one of the top three women in the world. She won the silver medal at the 2007 World Judo Championships in the middleweight division and the gold medal at the 2007 Pan American Games.

In August 2008, Rousey competed at the 2008 Olympic Games in Beijing, China. She lost her quarterfinal to the Dutch ex-world champion Edith Bosch but qualified for a Bronze medal match through the repechage bracket. Rousey defeated Annett Boehm by Yuko to win a bronze medal (note: Judo offers two bronze medals per weight class). With the victory, Rousey became the first American to win an Olympic medal in women's judo since its inception as an Olympic sport in 1992.

Rousey made her mixed martial arts debut as an amateur on August 6, 2010. She defeated Hayden Munoz by submission due to an armbar in 23 seconds.

She entered the quarterfinals of the Tuff-N-Uff 145 lbs women's tournament on November 12, 2010 and submitted promotional veteran Autumn Richardson with an armbar in 57 seconds.

Rousey faced Taylor Stratford in the Tuff-N-Uff tournament semi-finals on January 7, 2011 and won by technical submission due to an armbar in 24 seconds. She then announced plans to turn pro and was replaced in the tournament.

Rousey made her professional mixed martial arts debut on March 27, 2011 at King of the Cage: Turning Point. She submitted Ediane Gomes with an armbar in 25 seconds.

Rousey faced kickboxing champion Charmaine Tweet in an MMA bout at Hard Knocks Fighting Championship: School of Hard Knocks 12 on June 17, 2011 in Calgary, Canada. She submitted Tweet with an armbar in 49 seconds. Rousey has a 3-0 amateur winning record in amateur MMA competition, all fights combined were under 2 minutes.

A decorated judoka, Rousey typically grounds an opponent with tosses and sweeps, then seeks to finish with strikes or submissions. From top position, she usually attacks with punches from side control; in rear position, she often secures a back mount and attacks with head strikes.

Rousey is well known for her skill in grappling and jiu-jitsu, and is particularly noted for her string of victories by armbar. Against accomplished strikers, such as Julia Budd and Sarah Kaufman, Rousey has typically brought the fight down and sought a quick submission. Powerful grapplers, such as Miesha Tate and Liz Carmouche, have been more competitive with Rousey on the ground.

During early fights in her MMA career, Rousey mainly used striking to set up judo. She became a more proficient striker following her UFC debut, leading to her first wins by way of stoppage. While standing, Rousey normally uses jabs, knees, and overhand rights.

While discussing her signature armbar in an interview, Rousey noted that her judoka mother jumped on her every morning to wake her up with armbars.

Rousey is notable for introducing trash talking to Women's MMA. In many interviews Rousey has used harsh language and openly downplayed the abilities of her opponents, which she explains as a way to generate more publicity for the sport.

Rousey appeared nude on the cover of ESPN The Magazine's 2012 Body Issue and in a pictorial therein. Touching upon the strategic cropping, poses, and arm placement used in the photos to make them less revealing, Rousey explained: "With all these ring girls and their vaginas – all of this goes back to advice my mom gave me. She gave me this one piece of advice, which I still hold dear. She said, 'Look, whatever pictures you put out there are gonna be out there forever, so just think that one day your 12 or 13-year-old son or daughter is going to see those pictures. Whatever you want your son or daughter, or even your 13-year-old little sister to see, keep that in mind.' So, whatever I’m not gonna show on a beach, I'm not gonna show in a magazine. These girls are going to have to explain to their kids one day why mommy's ass and vagina are all over the place." Her rival Miesha Tate criticized Rousey's comments as "hypocritical", arguing that Rousey's comments about ring girls constituted a double standard.

Rousey co-starred in The Expendables 3 (2014), marking her first role in a major motion picture. She also appeared in the 2015 film Furious 7. Rousey will star in Athena Project, and will also be one of the female leads in the 2015 film Entourage.

Rousey was formerly a vegan, but describes her current diet as "kind of a mix between a Paleo and a Warrior diet",

She originally opposed using the nickname her friends gave her, "Rowdy", feeling it would be disrespectful to professional wrestler "Rowdy" Roddy Piper. After meeting Piper through Gene LeBell, who helped train both of them, Piper personally gave his approval.

Rousey is an avid fan of WWE and Pokémon. She also plays World of Warcraft.