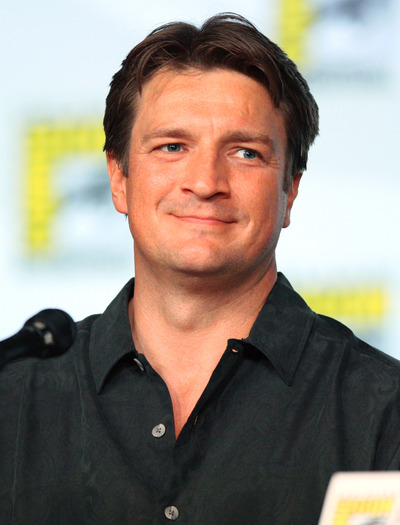 Nathan Fillion (born March 27, 1971) is a Canadian actor. He stars as Richard Castle on the ABC series Castle. He is also known for his portrayal of the lead role of Captain Malcolm Reynolds in the television series Firefly and its feature film continuation, Serenity.

Fillion was born in Edmonton, Alberta, Canada, the younger son of Cookie and Bob Fillion, both of whom are retired English teachers. He has an older brother, Jeff, and attended Holy Trinity Catholic High School, Concordia University College of Alberta, and the University of Alberta, where he was a member of the Kappa Alpha Society. According to Fillion, he is descended from Confederate Lieutenant General Jubal Anderson Early.

After working in several theatre, television and film productions, including Theatresports with Rapid Fire Theatre and the improvised soap opera Die-Nasty, Fillion moved to New York City in 1994 where he acted in the soap opera One Life to Live as Joey Buchanan, for which he was nominated in 1996 for a Daytime Emmy Award for Outstanding Younger Actor in a Drama Series. In 1997, he left the series to pursue other projects.

After moving to Los Angeles, he played a supporting role in the sitcom Two Guys, a Girl, and a Pizza Place, and was cast as James Frederick "The Minnesota" Ryan in Steven Spielberg's Saving Private Ryan.

Fillion starred in James Gunn's 2006 horror film Slither. For his starring role as Bill Pardy, he garnered a 2006 Fangoria Chainsaw Awards nomination in the category of Dude You Don't Wanna Mess With.